Easter is coming! On April 21st, people around the world will be celebrating with various traditions. From the Easter Bilby of Australia to Mexican cascerones, each culture has its own unique way to celebrate. However, one commonality is that we all celebrate with food. In Sweden, they eat a Smorgasbord, in the United States, a feast. In some countries, the traditional foods are sweet while in others they are savory, but all are absolutely delicious. Prepare to be hungry as we learn about 20 Easter foods around the world! 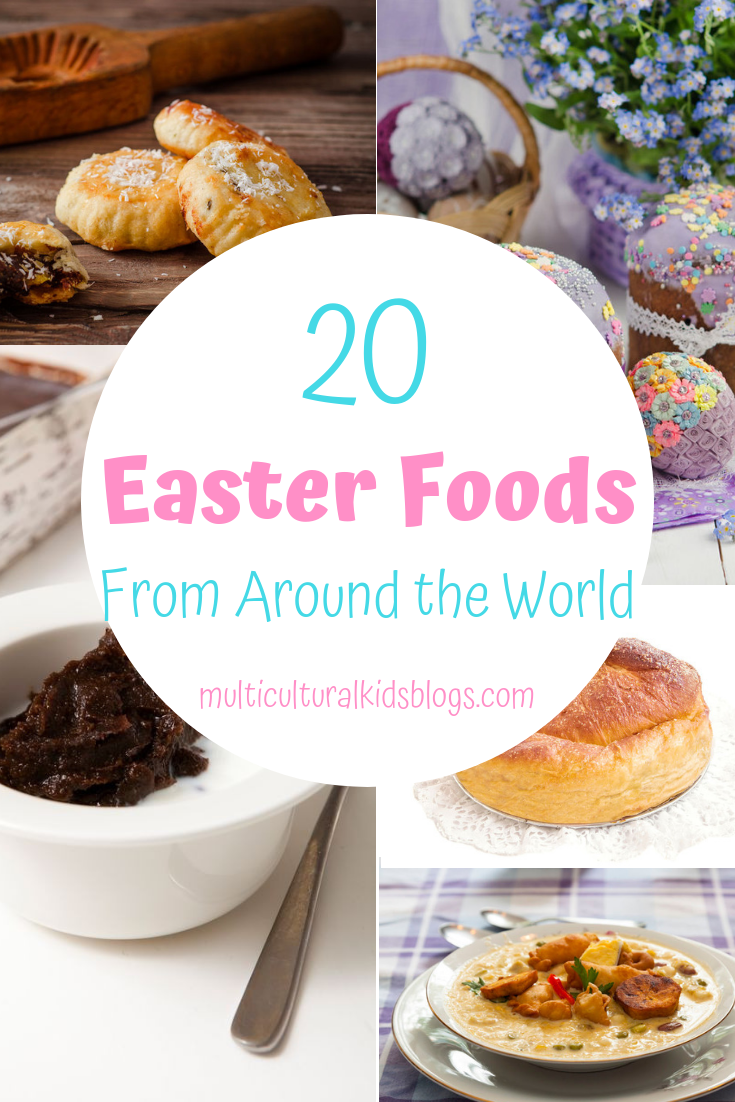 In Egypt, Fesikh (also sometimes spelled Feseekh), is considered a staple of Easter. Fesikh is salted and fermented grey mullet fish, and the recipe dates back thousands of years. It is traditionally served with bread and vegetables to cut the bitterness of the fish.

Families across South Africa will sit down to a meal Cape Malay Pickled Fish. This is a flavorful fish dish, best served cold with bread and butter on the side.  Chef Heinrich Koen says: “It seems to be one of those traditions that have roots within both Cape Malay (Muslim) households and in traditional NG Kerk (Christian) households that have intermingled over hundreds of years.” For South Africans, it would seem this dish is a symbol of community and can be enjoyed by all.

Defo Dabo is an Ethiopian bread reserved for festive times, because of the ingredients used. Using honey, eggs, milk, and various spices, Defo Dabo is traditionally wrapped in banana leaves and cooked over a fire in a clay pot. Leanna from All Done Monkey has a wonderful adaption of this recipe for those of us with little helpers.

In Algeria, mouna is the Easter sweet bread of choice. This brioche type bread is said to have the taste of orange and taste delicious with jam. During Easter, it is often marked with a cross and has become a symbol of the resurrection.

Capirotada is a cheesy bread pudding enjoyed in Mexico throughout the Lenten season. According to Yvette from Muy Bueno Cookbook, this dessert is not only delicious but also filled with symbolism: “The bread is for the Body of Christ, the syrup is his blood, the cloves are the nails on the cross, the cinnamon sticks symbolize the wooden cross, and the melted cheese stands for the Holy Shroud.”

In Ecuador, Fanesca is eaten throughout the season of Lent.  It is a fish stew, made hearty with grains and vegetables. The dish originated in Spain but evolved when the Spanish introduced it to the Incans.

Tarta Pascualina literally means “Easter Tart.” So it’s no surprise that it is an Easter brunch tradition in many Argentinan homes. This savory pie is full of eggs, vegetables, and cheese. Delicious!

A sweet treat in rural Brazil is Paçoca de Amendoim. This candy is a mixture of peanuts, sugar, sweetened condensed milk, and cassava flour. In the age of peanut-allergies, this candy may not appeal to many families. However, if you are a peanut-free family, and would like a taste, Leanna from All Done Monkey has a recipe using almonds as a substitute.

Massa Sovada is a traditional Portuguese sweet bread. It can be made year round but is made special during Easter by putting eggs on top to represent life and the resurrection of Christ. The bread can be eaten with butter, and sometimes is eaten with arroz con leche.

In Spain, families enjoy hornazo on Easter morning. Hornazo is a savory bread stuffed with egg, chorizo, and bacon. Sometimes the traditional Spanish blood sausage is thrown in for added flavor.

In northern Italy, people enjoy Easter Gubanas. A gubana is a rolled sweet bread, filled with dried fruits, nuts, and spices. It is traditionally served soaked in grappa, an alcoholic drink made from the remains of pressed grapes.

Pasca is a traditional Romanian Easter bread. Sweet, soft, and filled with cheese! What’s not to love!? Roxana from A Treats Affair describes it “Like a cheesecake in a bread.” Yum!

Baba (also called Babka) is a dessert from Poland and an Easter favorite. It’s a sweet yeast bread that may or may not include raisins, depending on who’s making it. And it’s wonderful both with and without frosting.

Mämmi is a favorite in Finland around Easter time. It is a type of rye bread pudding with a hint of orange. Served with a dusting of powdered sugar and cream on top, this dessert is a treat.

Kulich is a bread eaten across Eastern Europe and associated with the Russian Orthodox Easter. The kulich is placed in a basket on Easter morning. Then after the church service, the basket is blessed by the priest. Blessed Kulich will be eaten at breakfast. Historically it was served with cheese marked with “XB” a symbol meaning “Christ is Risen.”

In the Philippines, families eat puto on this holiday. The little cakes are traditionally steamed in banana leaves. There are several variations, including some made with flour and some made with rice. However, they are generally sweet, and can be served for breakfast, dessert, with a meal, or simply a snack.

In India, many Christians observe Lent by fasting from all meat. Therefore, Easter is not just the celebration of Christ’s resurrection, but the breaking of their fast. This warrants a meat-hearty feast. On Easter, many in Southern India enjoy a breakfast of curry and appams, a South Indian bread.

Who likes cookies? Maamoul is a traditional Lebanese cookie made on holidays, such as Easter. There are a variety of fillings from pistachios to dates, and it’s shaped with a traditional wooden mold.

This sweet Easter bread comes from Palestine and is full of Biblical symbolism. The kaak asfar is a round shape, which symbolizes the stone that covered the tomb where Jesus lay. It’s flat, to symbolize the bread without yeast, which God instructed the Jewish people to make before they embarked on their journey out of Egypt. Kaak asfar is traditionally eaten with breakfast after Sunday service.

Finally, Hot Cross Buns! These are an Easter favorite in Australia, New Zealand, Great Britian, Canada, and the United States. They are a soft sweet bread, laced with cinnamon and raisins. Icing usually makes a cross on the top to represent the crucifixion of Christ. Though these are a traditional Easter food in the United States, and I am from the United States, I have never actually had a hot cross bun. Maybe this year I will have to change that. 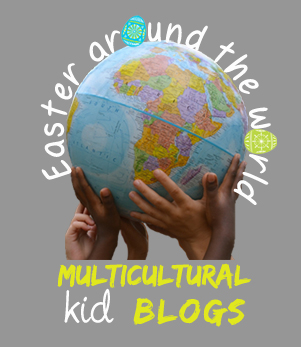 Easter is approaching, and once again we are excited to take you on a tour of the world and how it celebrates Easter! Explore the diverse traditions of Easter with us, and don’t miss our series from last year, or from 2017, 2016 or 2015. You also will enjoy this wonderful overview of global Easter traditions. Find these posts and more on our Easter Around the World Pinterest board:

Kid Minds: 5 Ways to Celebrate Easter Like a Russian Tsar

Kayla lives with her husband and two daughters in Minnesota, USA where she blogs part-time and moms fulltime. She can usually be found drinking a black cup of coffee and working on her Spanish skills. Kayla blogs about introducing babies, toddlers, and preschoolers to the Bible at Baby Devotions.