Travel with Kids to Israel? 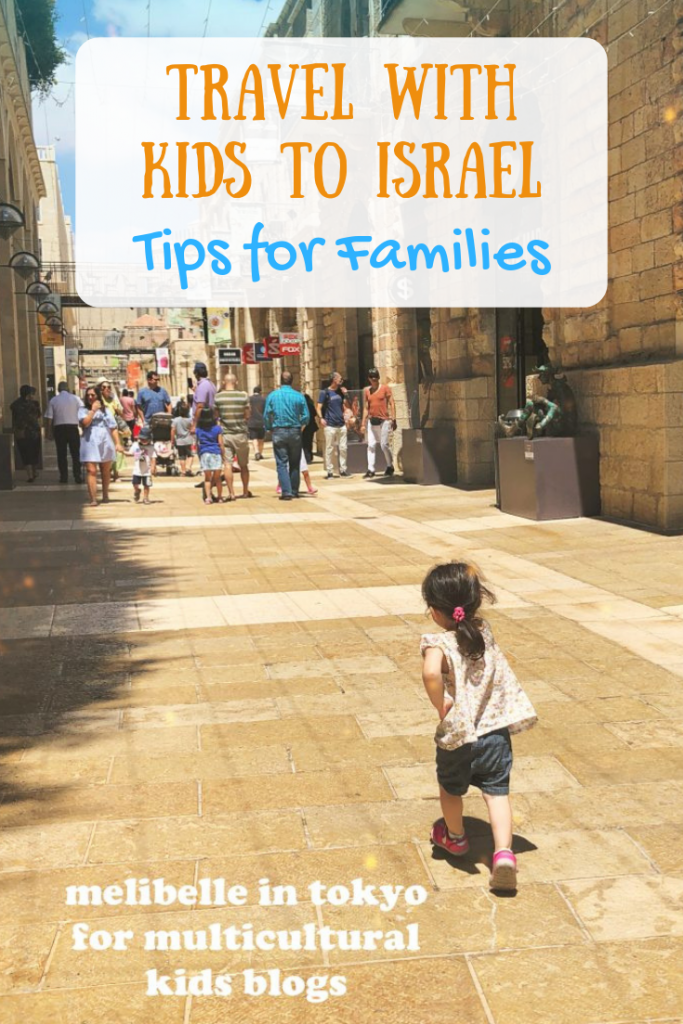 Israel is a wonderful place for family travel. This is not a place to “shush” children, many of my friends living in Israel assured me. Kids get to be themselves, and families can feel free to enjoy all that Israel offers. For such a teeny state (we’re talking New Jersey-size), Israel offers the snow-capped mountain of Mt. Hermon for skiing, stunning hikes, biking, and rental bikes with wide bike paths. It also has the most stunning beaches in Tel Aviv as well as Dolphin Reef in Eilat – voted one of the most amazing beaches in the world.

It is no problem to travel with children here. Children are prized and doted on, as I witnessed, true to my friends’ words.

Visiting Israel can feel surreal, especially if you have even a small foundational understanding of some of the places of the bible. Israel is a pop-up book with so much to say.

Jericho, for instance, is a beautiful city known for the most delicious dates in the world (boy, were they tall!). The city also has more than 20 unearthed settlements. The oldest of these goes back 11,000 years, making Jericho one of the oldest inhabited cities in the world. This is where my children rode a camel while I drank pomegranate juice and sampled hummus and mint tea while talking with the man selling necklaces that reminded me of my dad. Of course, I bought two.

Food as a window to the magic:

If you go in summer like we did, look out for practical ways to cool the kids off. Hotels offer pools. There are beaches that sprawl across an incredible coast. Before and after splashing, kids will gobble up the color within all of the many juice, smoothie, and ice cream shops dotted the way. Reserve money for the tantalizing fruit! Visit a shuk/market and scan the wealth of produce and flavor that Israel is able to grow. For vegetarians, Tel Aviv is especially known for being one of the most incredible vegan-friendly cities in the world. Exciting things are happening with food! Street food and flavors rock Israel. These past two years, shakshuka with cumin, pepper, and paprika is all I wanted. The best shakshuka, hands-down, appeared on the dining room table of our dear friend. It is truly soul food. This simmering dish, and perhaps any dish I ate, like the spicy spread below, could be the soundtrack to my time there, in scent-form! PS You really can sprinkle z’atar on most foods. Another food takeaway? Get a friend, new or old, to take you to a market or grocery store. We bought me a cabinet of spices and scrawled the names and suggested pairings/dishes for them in the car. This is how to buy souvenirs!

Things to keep in mind:

Don’t have the kids do too many sightseeing and historical things, warned our host and shakshuka friend. Don’t burn them out. Give them laughs. Give them time to play, especially in the water. Certainly, the local children will. There are water parks, those famous beaches and pools, and plenty of splash pads.

When going to certain religious sites, arms and legs will need to be covered, especially on the Temple Mount, in Jericho and in churches. Kids will be fine, but men and women will need to bring a shawl or scarf with which to cover. They can also use one of the long skirts or scarves provided at the entrance to one of these sites. You may get some chuckles seeing your male friends donning the regulatory skirts and scarves when they wore shorts instead of long pants.

Yad Vashem, the Holocaust memorial, is only for children ages ten and up. The museaum is so full and so well done, visitors may want to reserve a full day or half-days, perhaps. It is, as you may imagine, a bare-bones, stark witness of Holocaust atrocities under Nazi Germany. The museum also tells the story of how Israel got here. The state was given when Jews were fully needing to be rescued and placed on solid ground. It was one of the most poignant parts of our whole trip.

About moving around, car rental is available. In Tel Aviv, bike rental abounds and the tree-lined neighborhoods are made for cycling. Look out for blooming cactus and friendly people. Many of these friendly people will be walking or carrying dogs; Tel Aviv prides itself in being progressively friendly for pups and their owners.

If in Jerusalem on the Shabbat (Friday afternoon through Saturday sundown), transportation will be shut down for the most part. Certain hotel restaurants will also close for this time (there may have been a certain family who ate their just-delivered pizza on the walls of their Jerusalem hotel).

Have everyone suited up in hats and bring plenty of bottles of water. Apply and re-apply that sunscreen.

Read up and watch programs to prepare:

To get your appetite going, watch the Somebody Feed Phil: Tel Aviv episode (first Course season on Netflix). Watch this, too!

There is so much to say “sababa” over, which means “cool” or “great.” English is generally spoken, but having some Hebrew is useful and fun. Gearing up for our trip, the kids loved adding to their wee bit of Hebrew (our seven-year-old daughter prides herself in counting from one to ten and now higher, thanks to her time there).

Just like in Japanese, “excuse me” covers a lot of ground. Say “slichah” (slee-hah) to apologize or get someone’s attention.

You may know “Shalom” (hello, goodbye, and peace), but “Laheetraot” means see you later.

When interacting with an Arabic speaker, try using some Arabic phrases. Many are quite similar to the Hebrew. “Salam alechem” is so close to the Hebrew “Shalom aleichem.” To say “My name is Melissa” in Hebrew, say “Ani Melissa” and in Arabic it is “Ana Melissa.”

Again, it is the people who make a great difference on any trip. Everyone was fantastic, from waiters in Jericho who took turns lavishing praise sweetness to our youngest girl, to the old men I spoke with who sold me books and told me stories of coming here seventy-four years ago, before Israel was the state of Israel.

Some results and positive effects:

My children better see themselves as Jews now, which is especially important as we live in Japan. In Japan, they are the only Jewish children in their whole school, and maybe even in this whole prefecture within Tokyo.

I think they better understand other faiths as well and will be better equipped to understand some of the struggles that take place. Like any kind of travel, the joy is in going. It is a hands-on education. It matters to my family that we were there. We swam and worshiped. We hiked and felt welcomed.

Did I tell you about the food, though? Get ready to taste it all yourself!

Israel with kids? Ken. Undoubtedly. Our kids played with kids on trampolines and in hotel lobbies, hearing Hebrew and eating up pita with falafel. They ran around in sandles, their tanned cheeks giving way to smiles. They joined us in every meal, took in every wafting scent, every old stone, every kindness and “Shalom”. Israel is theirs and mine. It was our vacation and a way of returning to something grand.

Here’s the best word I’ve got: “Lahitraot. See you soon,” because we’ll be back.

Header Image: By the author

Christmas in Bethlehem
Purim: How We Celebrate a Festive Redemption
Jewish Kitlit Awards

Melibelle in Tokyo is Melissa Uchiyama, an American who has made her home in Japan for ten years. She mainly writes about home, old and new, and raising bicultural kids in Tokyo.