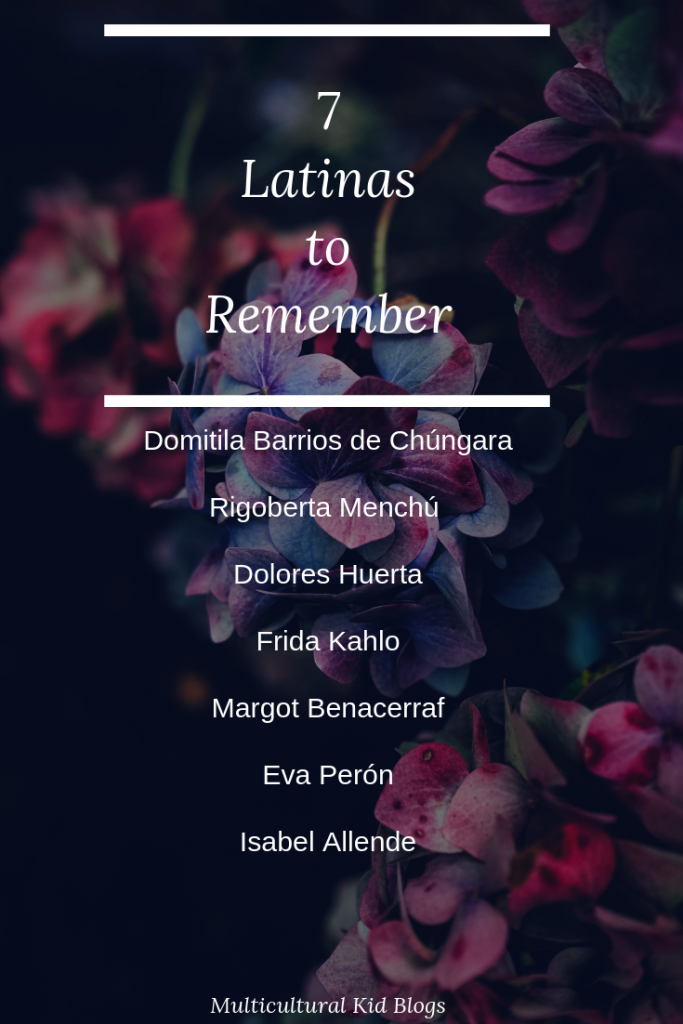 Latinas are known to be passionate, caring, and strong women. They are seen as deeply committed to their family values and traditions. I think that these features, alongside with many other traits, have made us capable of achieving great goals despite the obstacles that we may have encountered. Thus, National Hispanic Heritage Month is a great opportunity to honour those Latinas who have dedicated their lives to furthering women’s rights as well as for those who fought against the discrimination of indigenous people in Latin American Countries.

Many strong-willed and passionate Latinas have raised their voices.  They have fought for voting rights, protected minorities, pushed for reproductive health care reforms, and took part in many other different protests. They didn’t stay silent. The world is not the same after the presence of these powerful women and their crusade for equality.

From Mexico to Patagonia, Latinas such as Rigoberta Menchú, Domitila Barrios, Dolores Huerta, Eva Perón, and Frida Kahlo were ahead of their time and overcame the difficulties of a patriarchal and castrating society. These forces against them have tried to make them invisible and have also tried to separate them from the issues inherent in the construction of their nations.

With creative rebelliousness, they’ve managed to leave their mark in different fields of life, among them culture, politics, science, art, and legal reforms. Today, I bring you seven notorious women who are known for their opposition to injustice in North, Central, and South America. This is just an enumeration that can always be expanded to share the footprints left by other fearless women of Latin American history.

“I am like a drop of water on a rock. After drip, drip, dripping in the same place, I begin to leave a mark, and I leave my mark in many people’s hearts.” Rigoberta is a prominent K’iche’ activist and 1992 Nobel Peace Prize recipient with a lifelong dedication to furthering indigenous rights within the Americas.  Born in Laj Chimel, Guatemala, Menchú’s foray into political activism began in the 1970’s. She spoke out against the Guatemalan army’s human rights violations during the country’s civil war. Along with an estimated 1700 Ixil Mayans, Menchú lost her father, mother, and two brothers during the Guatemalan genocide. Importantly, Menchú continues to serve as the president of the organization Salud Para Todos which seeks to provide indigenous people with affordable medicine.

“We do need women in civic life.” Dolores is a Mexican American labour leader and civil rights activist known for founding the United Farm Workers alongside Cesar Chavez.  She advocates for the rights of immigrants, agricultural workers, and women. She began her career in activism in the 1950’s as an organizer for farm workers’ rights. In 1960, she began lobbying for legislation in support of Spanish speakers and undocumented people. She officially became the first Latina to be portrayed in the Smithsonian National Portrait Gallery.

“Feet, what do I need you for when I have wings to fly?” Frida was a Mexican artist whose paintings were inspired by the nature and artifacts of Mexico. She always tried to showcase her culture in every portrait.  Her art explored questions of identity, post-colonialism, gender, class, and race in Mexican society. Frida is also regarded as an icon for feminists and members of the LGBTQ movement. Kahlo’s “The Frame” is a 1938 self-portrait notable as the first work by a 20th-century Mexican artist to be purchased by a major international museum when it was acquired by The Louvre in 1939.

“I wanted to do more than a simple documentary.” Margot is a Venezuelan director of Moroccan Jewish descent. She was one of the first Latin American filmmakers to study at Institut des hautes études cinématographiques in Paris. After years spent in Europe, Margot directed two films: Reverón and Araya. Her documentaries are landmarks of Latin America narrative non-fiction. Margot’s goal was to raise awareness of one of Venezuela’s most isolated regions. She highlighted some of the impoverished harvesters who were descendents of families whothat have worked the same salt marshes since the days of the Spanish colonizers in the 1500s. Margot is a pioneer in using documentaries in Latin America to raise awareness of violation of workers’ rights, poverty, and isolation from technology.

“I demanded more rights for women because I know what women had to put up with.” Eva was the First Lady of Argentina from 1946 through 1952. Born into poverty in Buenos Aires, Perón achieved her dream of becoming an actress at the age of 20. As First Lady, Eva became a highly active, outspoken advocate for women’s suffrage and the poor. She also created the Eva Perón Foundation which sought to provide financial support to build homes, school, orphanages, and hospitals. She founded the first large-scale female political party and helped to gain women the right to vote in 1946.

“What I fear most is power with impunity. I fear abuse of power, and the power to abuse.” Isabel was born in Peru to Chilean parents. She worked as a journalist in Chile until she fled to Venezuela after the assassination (1973) of her uncle, Chilean President Salvador Allende. In 1981 she began writing a letter to her terminally ill grandfather that evolved into her famous novel La Casa de los Espíritus. Isabel’s concern in many of her works is the portrayal of South American politics. Her novels reflect her own experiences and examine the role of women in Latin America. History considers her one of Latin America’s most influential and successful woman novelists of all times.

Impressive list, right? I encourage you to continue searching for Latina activists who have shaped the future of their countries. One step at a time. Somewhere now, there is an empowered woman fighting to make equality (igualdad) a guideline for region’s policies. Somewhere now, there is a Latina raising her voice to build better societies for women, children, and Latinos in general. We won’t stay silent and neither should you.