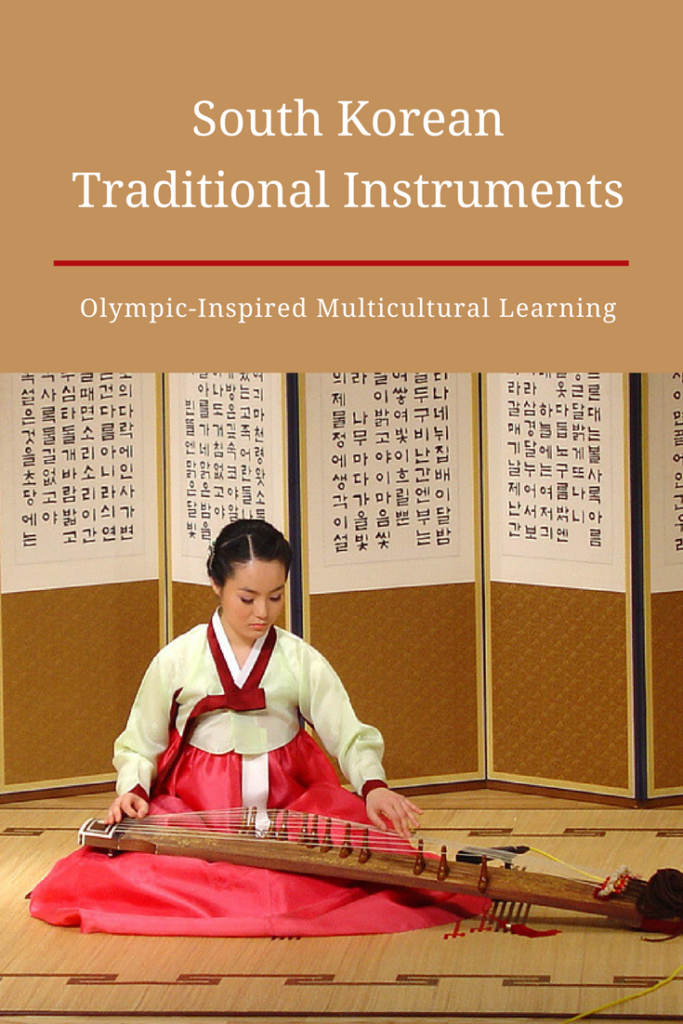 This year, when I introduced the Korean traditional instrument called Hae Gum, many students remembered last year’s lesson and called it an Ehru. The two are similar and demonstrate the ways that musical influences flow back and forth between cultures and places.

We learned about other South Korean instruments as well. The students put them into groups based on their characteristics: stringed instruments, wind instruments, and percussive instruments.

The Yanggeum is a hammered dulcimer and is unique from other stringed Korean traditional instruments because it has metal strings. Most have silk strings like the Kayagum.

The Kayagum is one of the most representative instruments of traditional Korean music. It is more than 1,400 years old. The Kayagum is played by the performer’s bare fingers rather than with a pick or artificial nails like the Japanese Koto or the American Banjo. It produces a delicate sound and originally had 12 strings; today most have between 19 or 21.

The Senap is a well-known double-reed instrument. It is also called Tae Pyong So or Nal Ra Ri. The Senap was traditionally used by military bands similar to the bugle in American military bands. It is unique among Korean reed instruments because of its volume, which is quite loud compared to others.

A one-of-a-kind instrument is the Saeng-Hwang, which was by far one of my students’ favorites because it is so unique. It is a mouth organ constructed from 17 bamboo pipes. To play it, air is blown into a hole in the wind chest at its base. This causes the metal reeds to vibrate; vibrations are necessary for all sound and music.

Another type of a Korean flute is called the Piri, which is a generic term for recorders and flutes made of bamboo. It is a favorite instrument in Korea and used often for folk music and other traditional songs.

We watched the Kayagum, Hae Gum and a Korean flute being playing together. The students thought it was cool to see a Spanish vlog in Japan highlighting Korean music — very multicultural!

The percussion Korean traditional instruments were a big hit with my own children and with my elementary music students. This was not a surprise. My students always love percussion instruments!

The Jing is a Korean brass gong. My students were surprised that the sound was not louder, but the mallet is wrapped in fabric to soften the sound. The Jing is primarily used for ceremonial music.

The Janggu is fun because it is a two-sided instrument. The left side features cowhide and the right side horsehide, and the left produces low tones, while the right produces high tones. In class, we created our own two-sided drum using class instruments and compared different drums in class that had high and low tones.

We had fun pretending to play along and dance along with this Janggu performance.

My students also loved watching other children perform on the Janggu.

The Janggu was my son’s favorite Korean instrument, and he drew a picture of it for me. I love encouraging students to combine art and music and draw an instrument while they listen to that instrument being played. In my son’s picture, his favorite comic book characters (of his own creation) are each playing one end of the drum. The villain is playing the dark/lower tone and the light/higher tone is being played by the hero of his comics. 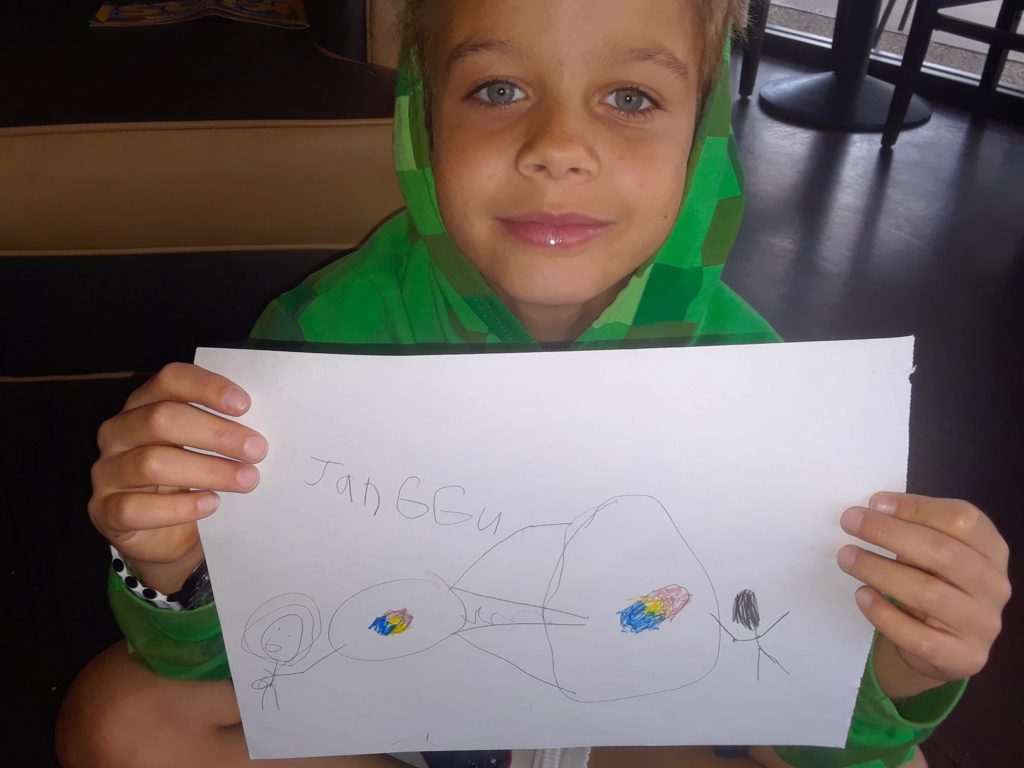 I hope you enjoyed learning about just a few of the most popular Korean traditional instruments. I encourage you to listen to them with your children/students and to encourage them to draw some of the instruments or pretend to the play the instruments and/or dance along as they listen to a performance. I’ve found music to be an incredible way to expand my children and students’ knowledge of the big, beautiful world that we share with others!