Ireland is a fantastic country to visit with kids. Famous for its stunning green scenery and friendly attitude towards visitors, the country is safe, beautiful and rich in cultural traditions. Ireland is sure to capture the imagination of adults and children alike. Here are my top tips for visiting Ireland with kids. 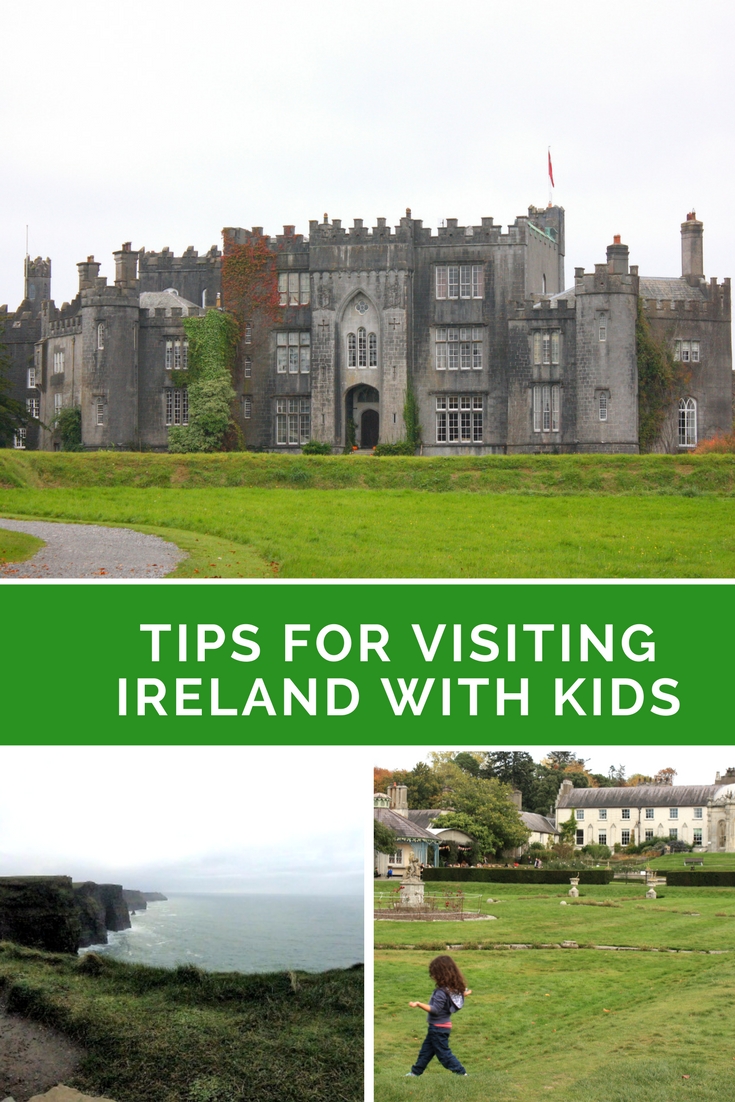 People come to Ireland for many reasons. Some love its literature and follow the footsteps of James Joyce and Jonathan Swift in Dublin’s dusty pubs. Others prefer the magic of fairy rings and hilltop medieval castles and come for the rugged scenery of the Irish coast, where the edges of Europe meet the Atlantic.

Whatever aspect you are after, a holiday here is likely to exceed your expectations. After 12 years in Ireland, these are my top tips to make the most of your time visiting the Emerald Isle.

Ireland has a terrible reputation in terms of weather. The one thing everyone seems to know about Ireland is that it rains often. This perception is so exaggerated that sometimes visitors are surprised to discover that some days are actually dry and some are even sunny!

Ireland is rainy but the weather is not as awful as you may think, especially in the summer. Some days are indeed wet, but grey skies and intermittent showers (rather than solid rain for hours at a time) is also common. There are plenty of dry spells to go sightseeing.

I recommend visiting Ireland with kids during August and September as these are usually the driest months. Summer is a lovely time to visit because of the long hours of daylight.

The wettest, darkest months are from November to February, when darkness sets in from 4.30pm.

Whatever season you choose, make sure you pack layers. Ireland is windy and the weather changes frequently, often meaning you experience all four seasons in one day!

Must see places and attractions in Ireland

Ireland is full of cultural and natural gems, many of them close enough to each other to be part of a travel itinerary around the country.

You can see here our recommended family friendly itineraries for 7, 10 days or 2 weeks in Ireland.

Great cities to visit in Ireland with kids

All Ireland itineraries should include a stop off in the Irish capital, Dublin. Located on the east coast of the country, Dublin is where most international flights arrive and it is a fantastic first stop before you venture across the country.

The best way to visit Dublin with kids is to find accommodation in the city centre. From here you can easily take a stroll around town. Stops not to be missed are the famous Trinity College library, home of the ancient book of Kells, Dublin castle, the old bastion of English power in Ireland, and Dublin’s beautiful parks.

Make sure you stop off at the playground in Merrion square. Here Ireland’s elegant Government buildings open up onto a large green space with a beautiful playground, overlooked by the statue of one of the country’s most beloved writers: Oscar Wilde!

You can read our guide to Dublin with kids here, full of practical information and tips for families

Two beautiful smaller cities worth visiting are medieval Kilkenny and Galway. Located, respectively, in the centre of Ireland and on the West coast, these two cities are the ones that most closely matched the Ireland of my imagination when I first moved here.

Medieval streets, colourful houses and the sound of violins rising from the warm interiors of the traditional pubs are a normal occurrence here. But there is also a dynamic intellectual vibe and lots of colourful street art. They both are an exceptional overnight stop when visiting Ireland with kids and tend to become a visitor’s most distinctive memory.

The real beauty of Ireland, however, can be found in its natural and windswept landscapes. Probably the most famous spot of all are the Cliffs of Moher, in the West of the country. These tall cliffs plunge into the Atlantic Ocean from a height of over 200 metres!

The Cliffs of Moher are the most visited site in Ireland. Despite the large influx of tourism, they retain their attractiveness and stay high on the list of must-see places in Ireland.

The West of the country is also the home of one of the country’s most famous routes: the ring of Kerry. Kerry is a small peninsula stretching into the Atlantic Ocean. The ‘ring’ is a looping road that follows its edge and that offers incredible panoramic views. The road is very popular and you can drive it all in one (long) day. It is one of the most scenic drives in Ireland but it is not for the faint-hearted; the road is narrow (Irish roads often are) and some bends bring you worryingly close to the cliff edge. Do not attempt if you are afraid of heights!

Ireland is said to be the home of over 30.000 castles. I find this number hard to believe and I suspect many of these ‘castles’ are little more than a pile of bricks (I have often gone on a quest for a castle to then find just a derelict wall). However, there are some impressive castles in Ireland that are worth a visit. Two of my favourite are Dunlough Castle at Three Castle Head and Trim castle (in the photo), which you may recognise as the shooting location for ‘Braveheart’.

How to get around when visiting Ireland with kids

Ireland is a relatively small country and the best way to get around is by car. If you do not drive, a reasonably good bus network exists. Trains also connect bigger cities. Be aware that some of Ireland’s most beautiful areas are almost the most remote ones, where buses and trains do not go. Should you opt for public transport, my suggestion is to base yourself in Dublin or Galway and book local day tours from local providers. The choice is usually vast and the quality, overall, good.

Ireland has a plethora of accommodation options from hotels to holiday cottages and private stays (homestays, B&Bs, airb&b). Irish people holidaying in Ireland usually select holiday cottages but for those of you visiting Ireland with kids, I recommend B&Bs or farms stays. Irish hospitality is famous and the Irish adore kids. Staying in a private home will truly give you a sense of this hospitality. It will also give you the chance to speak with the (usually very chatty) locals.

Fact about Ireland for kids

Marta is an Italian expat in Ireland with a passion for travel and cultural discoveries. Fuelled by coffee and curiosity, she travels with her husband and two little adventurers through Europe and beyond searching for authentic, slow travel experiences for all ages.

Latest posts by Marta (see all)