Hi everyone! I am Tara from Tara’s Multicultural Table and this is my first time writing for Multicultural Kid Blogs. Different cultures have always fascinated me. I was born in Japan, spent my early childhood in Germany, and now live in the United States with my Filipino-American husband and two young children. On my site, I search for recipes from around the world and through cookbook reviews to share with my family. I was asked to share something from Iraq and found this recipe for Samoon (Samoun). 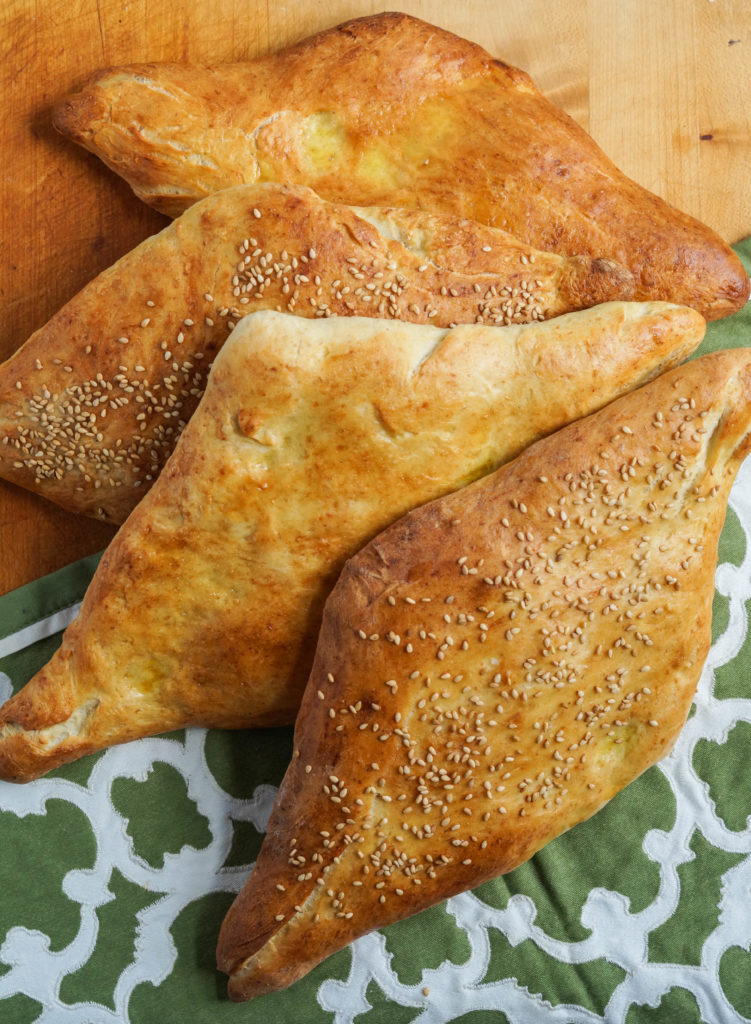 While trying to decide on a recipe to make, I ran a few ideas by my 4 year old son, Evan. He turned them all down and was quite insistent on making bread. His current favorite kitchen tool is my stand mixer and most mornings I am greeted with the question: “Make bread today?”

So with him in mind, we decided on Samoon. Samoon is an Iraqi flat bread formed in the shape of a diamond. It is traditionally baked on the walls of a tandoor oven and often served as a part of breakfast with Gaimar (cream) or cheese. It is also delicious with a variety of dips (like hummus or baba ghanoush) or sliced in half through the middle to use as a sandwich filling for grilled meat. In Iraq, yellow diamonds are painted on the outside of shops to signify that samoon are sold there. 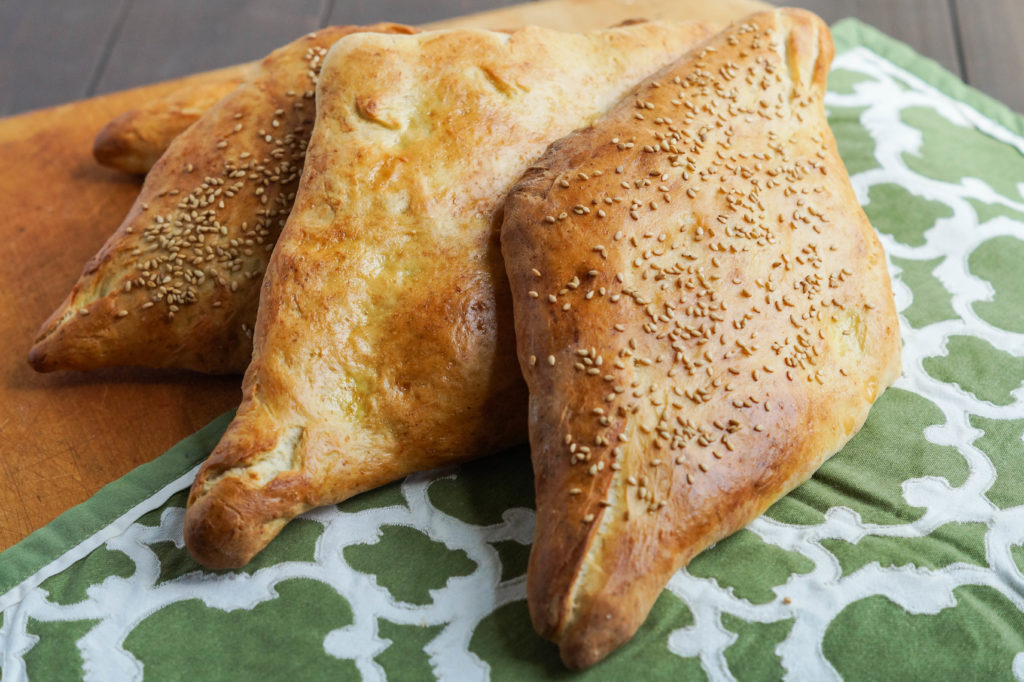 The base for this particular recipe includes yeast, flour, wheat bran, and buttermilk. Other recipes use only water in place of the buttermilk/milk. Wheat bran is the outer layer of the wheat kernel that is generally discarded when making flour. It is a great source of fiber/other nutrients and can be found in some larger grocery stores or health food stores. Store wheat bran in an airtight container in the refrigerator. It tends to go bad and become bitter more quickly than flour. 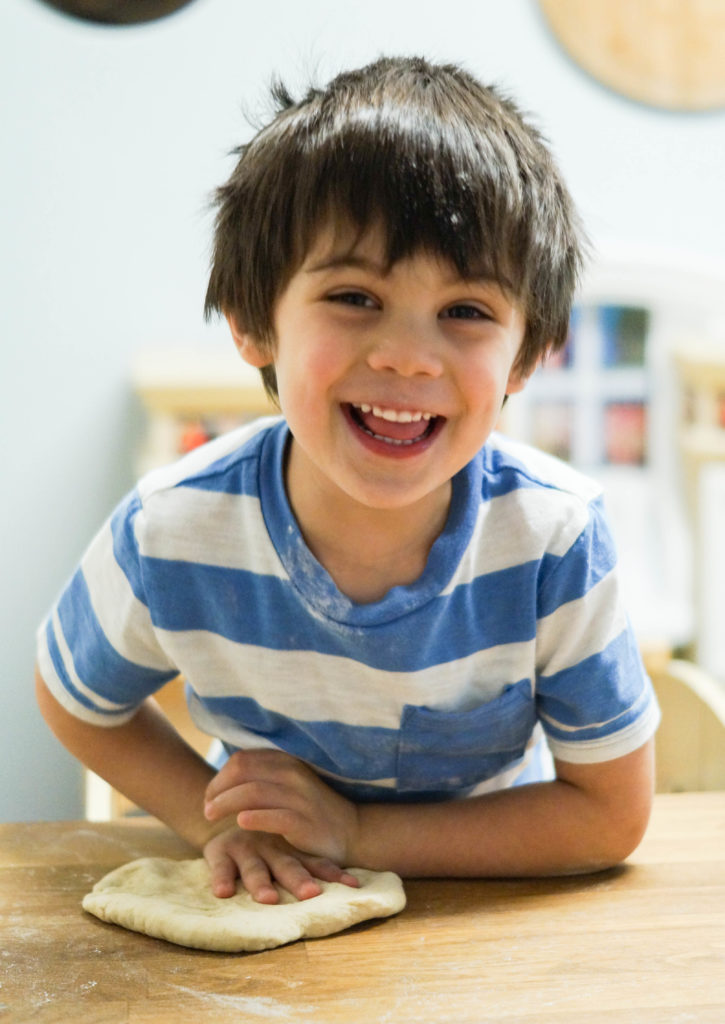 This was a fun bread to make with Evan. The dough is easy to work with, only has a handful of ingredients, and doesn’t involve any intricate patterns. He was even able to make the shapes himself. He now refers to the bread as “Diamond Bread” or “Yoda Bread” for the other Star Wars fans out there.

To form the bread, divide the risen dough into four equal pieces (you can also double the recipe to make eight). Roll one piece of dough into a flat rectangle. Pull two opposite corners, like the top left and bottom right in opposite directions to form the rectangle into a diamond shape 7-8 inches across. Pinch and taper the two opposite ends to make them thinner than the rest of the diamond.

Some Samoon are topped with sesame seeds. Some are left plain. Others are slashed once or twice across the top before baking. Evan is not a fan of sesame seed toppings, so I brushed all the samoon with the egg wash but only covered half with the sesame seeds. 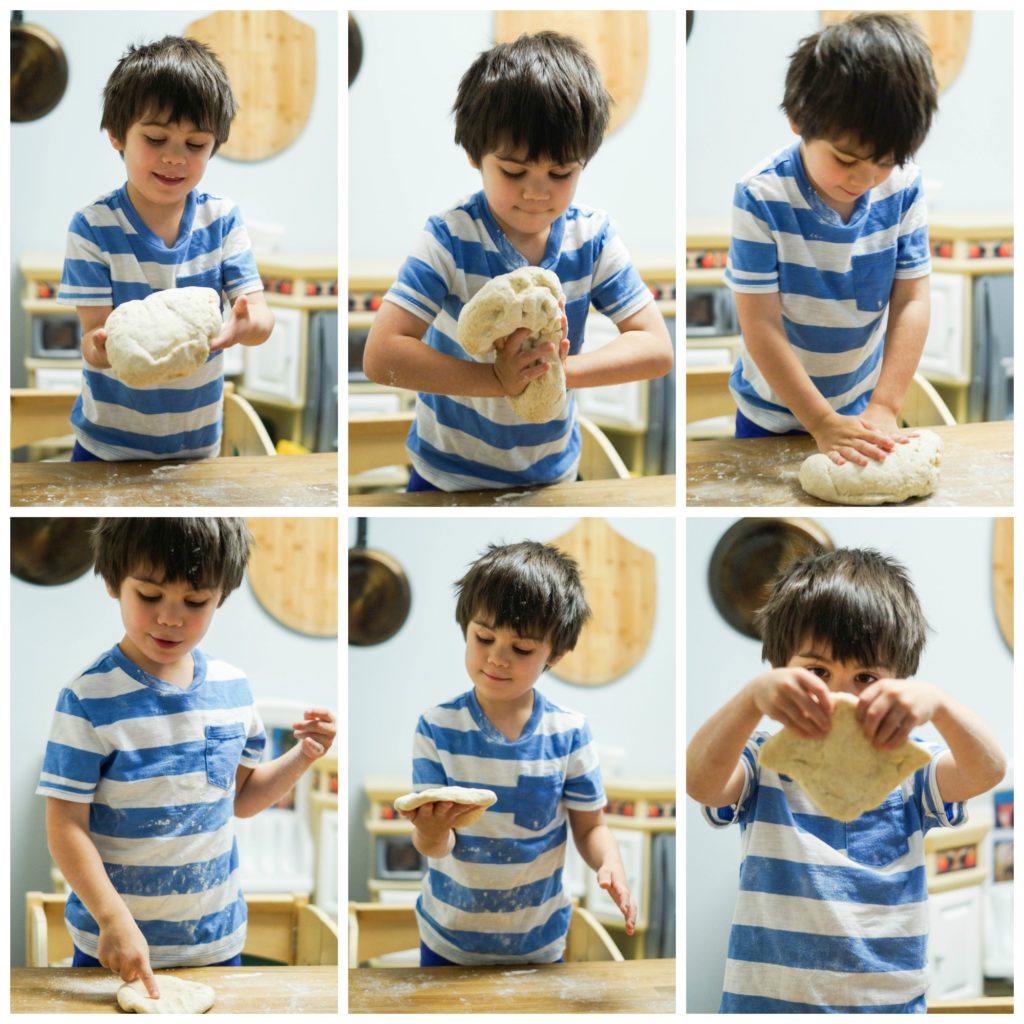 Some bread recipes call for spraying water in the oven while baking to help create steam. I am a bit nervous about trying this (particularly since I am renting and don’t want to accidentally ruin a perfectly good oven). Instead, I filled a small loaf pan with water and kept it on the bottom rack while the samoon baked.

After baking, wrap the warm samoon in cloth towels or inside a paper bagto keep them soft and chewy. If you want a more crisp exterior, leave them to cool on a wire rack. 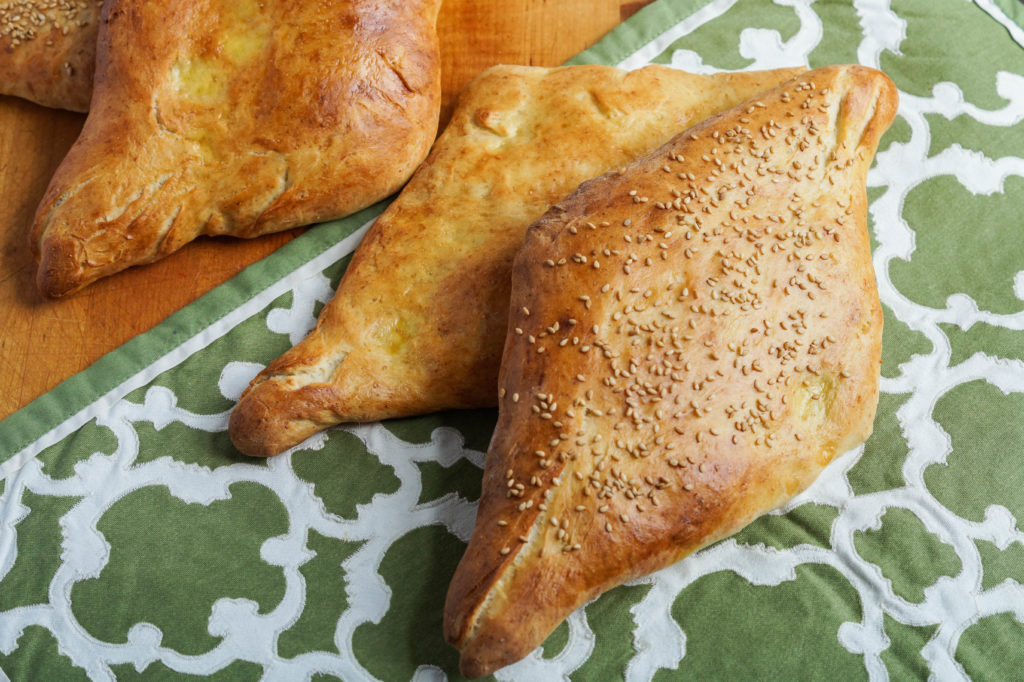 In a small bowl, whisk together the yeast and sugar with 1/2 cup of the lukewarm water. Allow to rest until frothy, 5-10 minutes.

In the bowl of a stand mixer fitted with a dough hook or a large bowl, combine the flour, wheat bran, and salt. Mix in the buttermilk, vegetable oil, and remaining 1/2 cup water until the dough comes together. If too crumbly, add a little more water. If too sticky, add a little more flour.

On a lightly floured surface, knead until smooth and elastic. Transfer to an oiled large bowl, turning to coat. Cover with a cloth or plastic and allow to rise at room temperature until doubled, about 1 hour.

On a lightly floured surface, punch down the dough and divide into 4 equal pieces. Cover and allow to rise for 10 minutes.

Place the oven racks in the top and bottom thirds of the oven. Preheat oven to 450 degrees F. Line two baking sheets with parchment or lightly grease. Fill a small loaf pan with water and place on bottom rack.

Roll one piece of dough into a flat rectangle. Pull two opposite corners, like the top left and bottom right in opposite directions to form the rectangle into a diamond shape 7-8 inches across. Pinch and taper the two opposite ends to make them thinner than the rest of the diamond. Place on prepared baking sheet and repeat with other pieces. Arrange two on each baking sheet. Cover lightly with a towel and allow to rise until puffy, about 30 minutes.

In a small bowl, beat together the egg and water. Right before placing in oven, brush the tops of the bread with the egg wash. If desired, sprinkle with sesame seeds.

Bake in preheated oven until golden brown, 15-18 minutes. Repeat with other baking sheet.

Best the day they are baked. Allow to cool on wire rack to develop a crisp exterior or wrap in cloth or a paper bag after baking to keep the bread soft.

This month we are learning all about Iraq, so link up below any old or new posts designed to teach kids about Iraq – crafts, books, lessons, recipes, music and more!

Tara Margetson is the blogger behind Tara's Multicultural Table. She was born in Japan, spent her early childhood in Germany, and now live in the United States with her Filipino-American husband and two young children. She features recipes from around the world along with cookbook reviews and travels with her family.