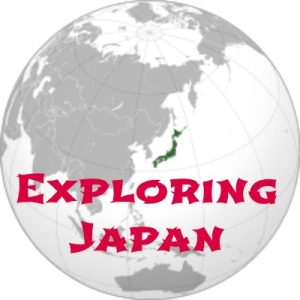 Today we are starting two new things. This post gets to be the start of both! The first is our annual Asian Pacific American Heritage Month Blog Series and Giveaway. All month, various Multicultural Kid Bloggers will be sharing posts having to do with Asian Pacific American Heritage and our giveaway will be running all month with some fabulous prizes (scroll down to enter!). 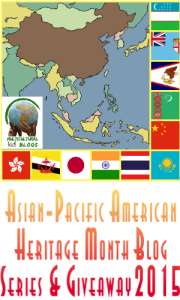 The second is a new endeavor called Global Learning for Kids. Each month we will feature a country and host a link party to collect all the various posts people about teaching kids about that country–crafts, books, lessons, recipes, etc. It will create a one-stop place full of information about the country.

Since it is Asian Pacific American Heritage Month, our first country in the Global Learning for Kids series will be Japan.

The island nation, Japan, is located in the Pacific Ocean and is part of East Asia. It lies to the East of the Sea of Japan, China, Russia, and North and South Korea.  The Kanji word for Japan means “sun origin” and Japan is often referred to as the “Land of the Rising Sun.” Kanji is the written Japanese language or letters.  Japan is made up of 6,852 islands. The four largest make up 97% of Japan’s land area.  The capital city is Tokyo which is home to about 9.1 million people. The Greater Tokyo Area has over 30 million residents and is the largest metropolitan area in the world.

Seventy three percent of Japan’s land is mountainous, forested, and unsuitable for agriculture, industrial and residential use. The result is that the habitable land has dense population and thus Japan is one of the most densely populated countries in the world. Japan is located in the volcanic zone of the Pacific Ring of Fire. Japan has 108 active volcanoes. During the twentieth century some new volcanoes have emerged in the Pacific. Also there are destructive earthquakes often causing tsunamis several times each century. Due to its location in the Pacific Ring of Fire, Japan has the highest natural disaster risk in developed world.

The climate of Japan varies from place to place. The northern part has long, cold winters and warm, humid summers.  The central zone depends on which side of the islands. The Sea of Japan has heavy snowfall in the winter and is cooler in the summer than the Pacific side except the foehn wind can bring extremely high temperatures. The Central Highland has extreme temperature differences between summer and winter as well as day and night and can see extreme snowfall. The mountainous regions shelter the Sheto Inland Sea so it has mild weather year-round. The Ryukyu Islands have warm winters and hot summers. The average temperature in Japan during the winter is 5.1 °C (41.2 °F) and during the summer is 25.2 °C (77.4 °F).

Japan was first inhabited around 30000 BC. Buddhism was introduced by Baekje of Korea and was heavily influenced by Chinese Buddhism.  It was met with resistance but became more widespread during the Asuka period (592 – 710).  The Samurai emerged as a dominating ruling class of warriors during Japan’s feudal era.  In the 16th century Jesuits missionaries from Portugal reached Japan for the first time. This began a direct trade with the West.

In the 1800’s several treaties with the Western world brought crises and changes to Japan. Following this the Imperial Diet was assembled. Today Japan is a constitutional monarchy. The power of the Emperor is very limited. The Emperor is defined in the Constitution as “the symbol of the state and of the unity of the people.” The current emperor is Akihito. Power is held by the Prime Minister and other elected members of  the National Diet. The Diet consists of a House of Representatives with 480 seats elected every four years and a House of Councillors with 242 seats elected every six years.  The Prime Minister of Japan is appointed by the Emperor after being designated by the Diet from its members.

Primary and middle school are compulsory and have been since 1947. These schools cover nine years (ages 6 – 15). Almost all students continue with a three year senior high school and then around 76% continue their education with a university, trade school or some form of higher education.  The culture of Japan has been greatly influenced by many other cultures, but traditional culture includes the tea ceremony, Geisha,  origami, ikebana (flower arranging), calligraphy, martial arts and more. Japanese music is also very diverse but includes instruments like the koto (introduced in 9th and 10th centuries) and the shamisen (from the 16th century).  Sumo is the traditional sport of Japan. Japanese martial arts are practiced by many. Western sports have been introduced and now baseball is the most popular spectator sport. Japanese cuisine combines some staple foods such as Japanese noodles or rice with a soup and okazu. An okazu is a dish made from fish, vegetable, tofu, etc. to be eaten with the rice.

This is a brief introduction to Japan. For more information or suggested activities check out any of these wonderful posts shared below. 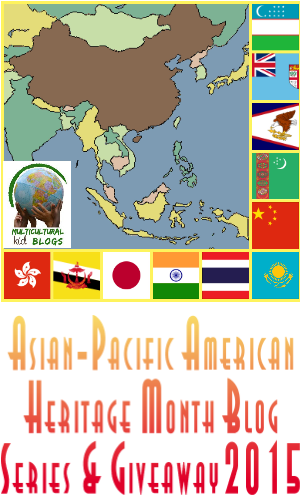 Multicultural Kid Blogs is excited to announce our second annual Asian-Pacific American Heritage Month Blog Series and Giveaway! See our main page for a full schedule, and be sure to enter the amazing giveaway below! The giveaway starts Monday, May 4 and goes through Monday, June 1. Enter for a chance to win one of these amazing prizes! Please note that there are shipping restrictions on some prizes. In the event that the winner lives outside of the shipping area, that portion of the prize will be added to the following prize package. 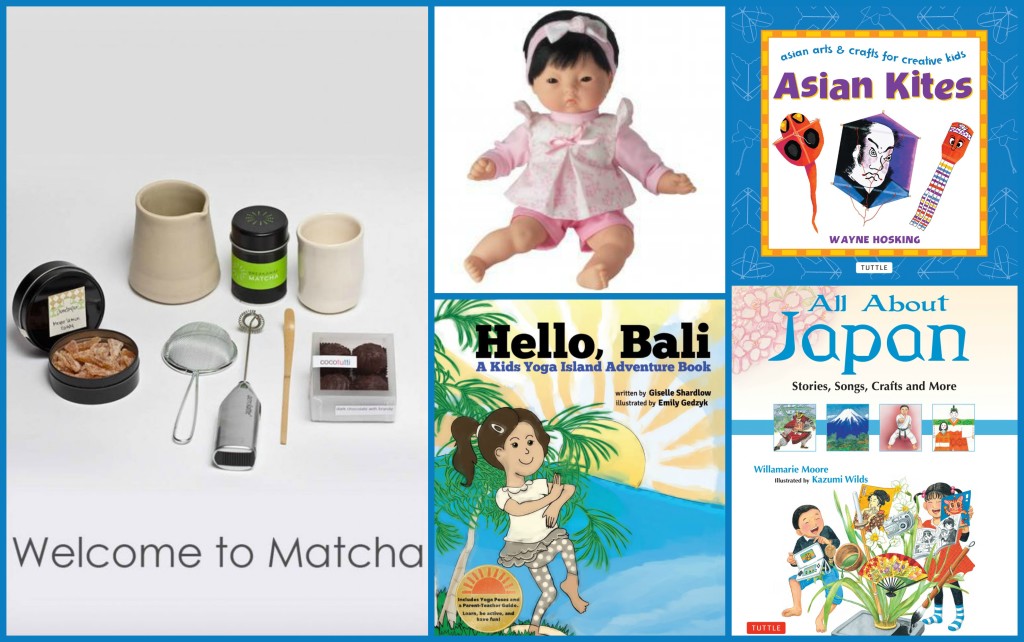 Personal Tea Ceremony Gift Set from Gift a Feast Includes everything you need to prepare and enjoy matcha, the tea served in traditional Japanese tea ceremonies. Enjoy being part of the journey of matcha tea from the temples of 12th century Buddhist monks to today! US shipping only

Calin Yang Doll from Pattycake Doll Company For the parents of Multicultural, Biracial, Black or Asian children, finding that perfect doll used to be a challenge. But today all that has changed. Pattycake Doll Company is the recognized source for Black, Asian, Hispanic, Biracial, and Multicultural Dolls as well as Dolls for Boys, and donate 10% of profits to children’s charities. This month’s contest winner will receive the most popular Asian Baby Doll in the world – Calin Yang by Corolle.

Asian Kites from Tuttle Publishing Kids will learn how to make colorful kites while exploring Asian culture and history with this easy-to-follow crafts for kids book.

All About Japan from Tuttle Publishing 2012 Creative Child Magazine Preferred Choice Award Winner! A cultural adventure for kids, All About Japan offers a journey to a new place—and ways to bring it to life! Dive into stories, play some games from Japan, learn some Japanese songs.

Hello, Bali from Kids Yoga Stories Say good day to the magical island of Bali through these energizing yoga poses for kids. Join one of the Yoga Kids, Anamika, as you surf like a surfer, dance like a Balinese dancer, and sit like a monkey. Included is a list of Kids Yoga Poses, Basic Indonesian phrases, and a Parent-Teacher Guide with tips on creating a successful yoga experience. 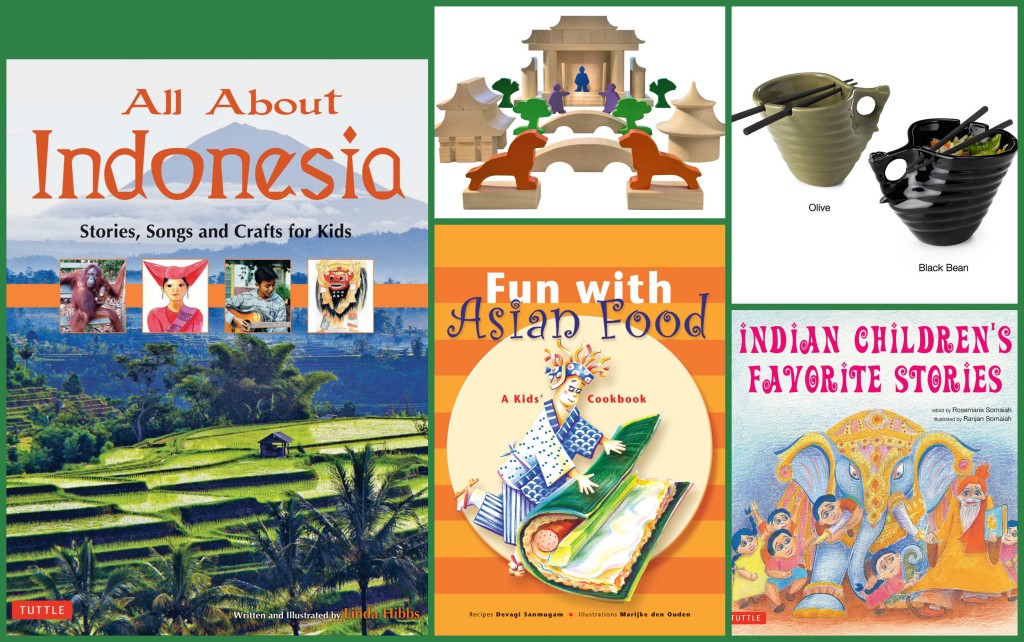 Udon Noodle Bowls from Uncommon Goods Whether you’re hosting a dinner party or lounging on the couch, this creation is ideal for udon, soup or stir-fry. A blend of a mug and a bowl, the handmade piece is contoured to fit snugly in the palm of your hand. Black lacquer bamboo chopsticks included. US Shipping only

Japanese House Architectural Blocks Set from HABA One of the oldest cultures in the world also has one of the most beautiful forms of architecture. Complicated multi-tier roofs and ornate pagodas allow the builder to create temples, palaces or calming formal gardens. With this set your child can take their imagination on a trip to Japan in the safety of their own living room. US/Canada Shipping Only

All About Indonesia from Tuttle Publishing A book for children that takes them on an adventure through one of the world’s largest and most culturally diverse countries. Along the way, kids are introduced to Indonesian culture and history, the food, the language, and the natural beauty of this fascinating country!

Fun with Asian Food from Tuttle Publishing This Asian cookbook for kids contains fun and easy recipes that children will love to cook and dishes that even the pickiest eaters will savor! 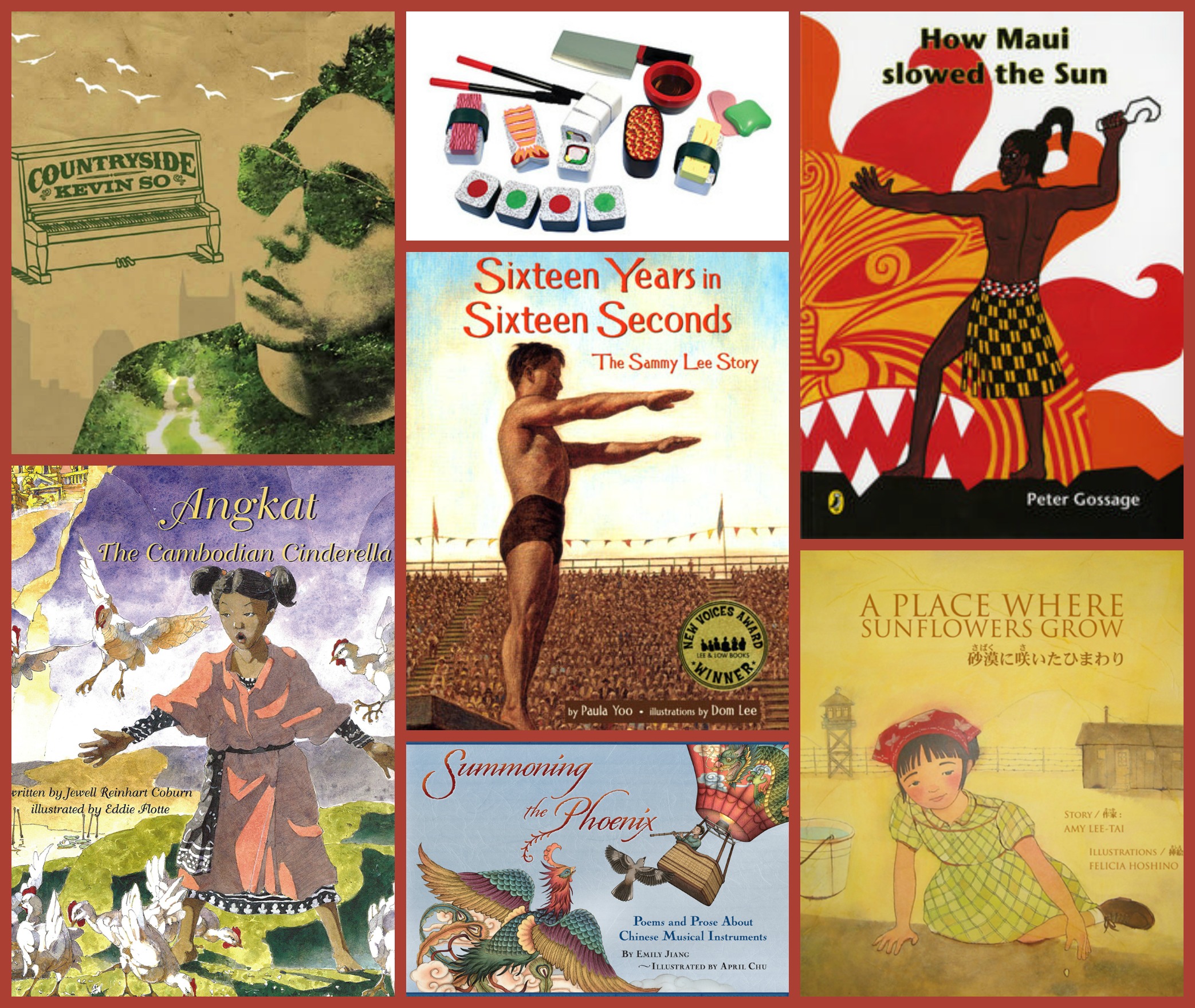 Countryside from Kevin So An album filled with “heartfelt great songs, great singing and great playing…simply something you’ll love if you’re a fan of originality, melody, surprising lyrics and beautiful instrumentation, beautifully played.” Learn more about this artist and listen to samples of his work here.

Book from the Maui New Zealand series from Global Kids Oz Enjoy a book of from this collection of New Zealand Maori Myths and Legends that every New Zealand child is brought up with in school!

Angkat: The Cambodian Cinderella from Lee & Low In the first English retelling of this ancient Cambodian tale, our heroine goes further, survives more, and has to conquer her own mortality to regain her rightful place. Angkat—child of ashes—endures great wrongs as she seeks to rise above the distresses caused by her own family. US Shipping only

Summoning the Phoenix: Poems and Prose About Chinese Musical Instruments from Lee & Low Including both flights of fancy and practical considerations, lively poems capture each child’s musical experience with a different Chinese instrument, while sidebars provide more information about each one. US Shipping only

Juna’s Jar from Lee & Low When her best friend moves away, Juna sets out to search for him with the help of a special jar. What Juna finds is that adventure—and new friends—can be found in the most unexpected places. US Shipping only

A Place Where Sunflowers Grow from Lee & Low A powerful story of hope, recounting the little known tale of the art schools that offered moments of solace and self-expression to Japanese Americans in the US internment camps of World War II. US Shipping only

Enter for a Chance to Win!