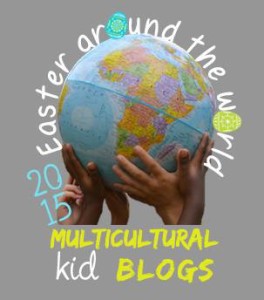 Easter is the most important holiday for Christians around the world. Easter is called a movable feast since it is not a set date each year. The Western churches celebrate Easter on the first Sunday following the full moon after the vernal equinox, March 21, which means it can fall between March 22 and April 25 every year. Orthodox Christians use a Julian calendar, and their Easter usually is a week or two after the Western Easter, which follows the Gregorian calendar.

The source of the English name Easter is unknown. There are several thoughts as to where it could have come from. In Spanish Easter is Pascua and in French it is Paques. Both of these names are derived Greek and Latin words for Passover (Pascha or Pasch), since Jesus’ crucifixion occurred during Passover.  The date of Easter as the first Sunday after the first full moon after the Vernal Equinox (or the Paschal Full Moon) was determined by the First Council of Nicaea in 325 AD.

Easter is more than just a one day holiday. The Easter season begins with Ash Wednesday, which is the first day of Lent. Lent lasts for forty days (plus Sundays) which represents the forty days Jesus spent in the desert fasting and being tempted by the devil. After being fasting for forty days in the desert, Jesus began his work.

The time of Lent is usually a time for penance, sacrifice and prayer. It is also a time of preparation. The color purple can symbolize preparation, and during Lent (and Advent) purple is used in churches. Lent sacrifices and penance vary by culture and church. The Catholics, for example, give up meat on Fridays during Lent. Eastern Orthodox churches sacrifice even more. Many Western Protestant churches do not have set sacrifices but the individual chooses what to give up or do during Lent.

The week before Easter is called Holy Week. It begins with Palm Sunday.  Palm Sunday celebrates when Jesus rode into Jerusalem for the Passover celebration.

As Jesus rode into Jerusalem, crowds of people gathered to see Him. They waved palms and branches and yelled, “Hosanna!” to Him. Crowds gathered to see the Lord, the King of Israel. The people of Jerusalem asked the crowds who the man was and they replied he was Jesus, the prophet from Nazareth in Galilee. During the week Jesus angered and scared the leaders, who plotted to kill Jesus. One of Jesus’ disciples, Judas, went to the chief priests and asked what they would give him to betray Jesus. They paid him thirty silver coins.

As Passover began the disciples and Jesus planned to have the Seder dinner in a room at a friend’s house. The disciples argued over who would wash each one’s feet.  Jesus began washing their feet, and they got upset. Jesus told them if He did not wash their feet they would not be with Him. They allowed him to wash their feet. Then it was time for the special meal. Jesus said a blessing and then broke the bread. He said, “Take eat. This is my body.” Then He takes the cup and after a prayer said, ““Drink from it, all of you;  for this is my blood of the covenant, which is poured out for many for the forgiveness of sins. I tell you, I will never again drink of this fruit of the vine until that day when I drink it new with you in my Father’s kingdom.” This is where Christians get the Sacrament of Communion. This dinner is thought to have taken place on Thursday, and the day in Holy Week is called Maundy Thursday or Holy Thursday.

After the meal Jesus told the disciples how they will deny Him and desert Him. They went to the Garden of Gethsemane. Jesus wanted to pray and asked his disciples to stay awake and on guard for Him. Three times He had to awaken them. While He was speaking to them the third time, Judas arrived with a crowd with swords and clubs. Judas kissed Jesus on the cheek and then the soldiers arrested Jesus.

Jesus was tied and taken to the High Priests. They questioned Him and eventually He was taken to Pilate, the Roman Governor. Pilate was not sure what to do and did not want Jesus’ death on him, so he offered to release a prisoner. The crowd chose a robber over Jesus to be saved.  Jesus was beaten and whipped. The Roman soldiers mocked Jesus. They made a crown of thorns and placed it on His head and put a robe on Him. They told Him if he was a king he should have the crown and robe.  Again Pilate tried to release Him. Pilate brought Him to the crowd and said he had found no guilt with Jesus. The crowd yelled to crucify Him. Pilate ordered Jesus to be crucified. Jesus carried his cross on which Pilate had inscribed “Jesus of Nazareth The King of the Jews.” When Jesus was crucified, the soldiers divided his clothes into fours. His tunic however was one piece and they decided to cast lots for it instead of ripping it. Standing near his cross were his mother, Mary, Mary Magdalene and his mother’s sister.  When Jesus saw his mother and one of his disciples He said to his mother, “Woman, behold, your son!” and to his disciple, “Behold, your mother!” That hour the disciple took Mary to his house. After this Jesus said He was thirsty. The soldiers put a sponge in sour wine and held it with  a branch to his mouth. After this Jesus said, “It is finished,” and bowed his head and died. Upon his death the sky went dark even though it was day. His death is supposed to have happened on Good Friday.


After Jesus died his friend took his body and wrapped it in linen and took it to a tomb. There the Roman soldiers closed the tomb with a large boulder and guarded it.  Three days after his death, Mary Magdalene and the other Mary came to the tomb at dawn. They were surprised to see the boulder rolled away and find the tomb empty. Then an angel appeared and told them not to fear that Jesus was no longer dead. Mary Magdalene was crying and had trouble believing and she bumped into someone and realized it was Jesus. He asked her to tell his disciples that He was alive.  The celebration of Easter Sunday is that Jesus is risen. Christians throughout the world celebrate that through Jesus’ death and resurrection, God has forgiven them of their sins and now they can live with God and Jesus in heaven. 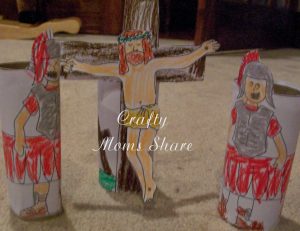 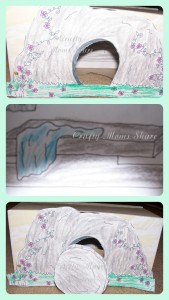 My daughter loves to reenact the story and we made these toilet paper roll props so she can. We used the printables from Catholic Icing. I hope you will continue to follow the series as we explore Easter celebrations throughout the world.