The kitchen timer softly chimed, its numbers half worn away by years of use. Two bubbling pots now playing the lead in the chorus of Christmas dinner sounds. A red and white dish towel lay spread under the window covered by dozens of small gingerbread angels, fish, stars and moons. This latest batch will soon join the Vanilkové rohlíčky (vanilla rolls), Linecké cukroví (Linzer cookies) and Išelské dortíčky (Išel’s tarts) in the shoe box on the dining table. Cookies we’ll be eating for the next two months.

The smells in the house are undeniably festive. Děda (grandpa) is bringing up more coal from the basement to refill the heater in the living room, while I prepare alternative heating measures with a round of plum brandy. There’s a Carp swimming in the bathtub. This is Christmas in the Czech Republic. Soon we’ll be gathering around the Christmas tree to sing along with a cassette of Czech Christmas hymns. When we’re done singing, the tape will be rewound, ready for next year. It hasn’t left the tape player in twelve years.

Most people get their tree from a tree vendor in the city. The scene is pretty much what you would find in any western country. However we get ours from the woodsmen that manage the forest in Divoka Sarka, a big nature park near our house. At the end of bumpy dirt road a booted and heavily bearded fellow with a red nose and a big axe points out the trees they have on offer. Czech Christmas Trees are shorter than their American cousins. We take one of the bigger ones, and it still barely matches my 5 feet and 8 inches. Back at home we decorate the tree with the mishmash of ornaments we’ve amassed over the years. Among them are traditional woven straw stars and angels, hand-blown glass balls that were produced in the communist era, and other decorations purchased in Prague’s famous Christmas markets. My older son Oliver gets the honor of donning the tree topping star.

Dinner on Christmas Eve is simple and wonderful. Fried Carp with potato salad, preceded by fish soup and some type of tasty liquor. There’s a coin under each plate to bring luck in the coming year, as well as a scale from the visiting Carp for each wallet. It’s festive and memorable for everyone. Except perhaps the Carp.

A week or so before Christmas the fish mongers from South Bohemia come to every town, filling giant vats of water with their most prized fish. Queues of eager shoppers line up to purchase their traditional dinner. In earlier days most would take the fish home alive in a large plastic bag where they would keep it in the bathtub for a few days. The fresh water in the bath cleansing the fish, and the fish entertaining the kids. Then a day or two before Christmas Eve, a mallet and an hour or so of gutting and cleaning transform the would-be pet into a memorable dinner. However now fewer people are willing to undertake the mallet routine themselves, so the fish mongers offer to do the deed for a small additional fee. A modern twist on the traditions.

Many Czechs go to midnight mass on Christmas Eve, despite that fact that the Czech Republic is one of the least religious countries in the world. Even though most people are atheists, the church remains deeply woven into the culture. Christmas today is much like Christmas a hundred years ago. Of course now there’s more shopping, but the traditions live on. 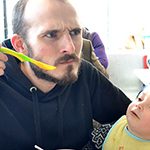 Ryan Cole is the father to two Czech American boys who are growing up in Prague. He is also the creator of Little Lexicon, an online phrasebook for bilingual toddlers.

I'm father to two Czech American boys who are growing up in Prague. I'm also the creator of Little Lexicon, an online phrasebook for bilingual toddlers.