Today we are kicking off our fun Christmas in Different Lands Blog Hop. To start this year’s blog hop we are discussing Advent Around the World. Advent is the time to prepare for Christmas. The word Advent means “coming” or  “arrival”. During the month before Christmas, Christians prepare for the Advent of Jesus Christ. The church celebrating Advent goes back at least as far as the fifth century. In some religions and in the past people fasted during Advent. The fasting also once began with St. Martin’s Day which is forty days prior to Christmas and this was sometimes called St. Martin’s Lent. It was later shortened to the four weeks prior to Christmas. Advent always starts on the Sunday closest to November 30, St. Andrew’s Day. The Greek Orthodox Church still continues the fast during Advent, but not with the same rigor as the fast of Lent. (Source) The two most common practices around the world seem to be the Advent wreath and candles and the Advent calendar.

At one point Advent was a serious and solemn occasion. Nowadays it tends to be a time for celebration and anticipation for many.  Traditionally the primary color of Advent was purple (like Lent). Purple is the color of penitence and fasting as well as royalty. Some churches have switched to royal or bright blue to differ from Lent. The third week’s candle is often rose or pink now. At one point it was tradition of the Pope to give someone a rose during the third week of Advent mass to liven up the solemn time, and this tradition became the rose colored candle. (Source) The fifth candle in the middle is white and represents Jesus Christ. Some Advent wreaths do not have it.

Now in most countries that celebrate Advent, an Advent wreath is involved. Many Advent wreaths are made with evergreens to symbolize everlasting life. The wreath is a circle representing God’s continuous love as well as soul’s immortality (Source), similar to the one pictured above from Marianna at Bilingual Avenue. This Advent wreath looks very similar to the ones Marianna remembers from her childhood in Venezuela. She remembers having one in her classroom growing up.  Each student would bring it home for a night.  The family would light the class wreath and pray around it and then each student would add a little something for a decoration. Marianna reminisces about the wonderful bonding experience the class had creating their own wreath.

Others give the Advent wreath a modern twist like the one shared above by Ilze from Let the Journey Begin. She is originally from Latvia and now lives in Germany. The idea of an Advent wreath is thought to come from pre-Christian Germany. There is evidence of people using wreaths with candles in the long, dark days of December as a sign of hope for the future warm days of light in spring. In Scandinavia people light candles around a wheel and offered prayers to the god of light to turn the earth back towards the sun. By the Middle Ages, the Christian Church had adopted the Advent Wreath. (Source) There are different meanings for the candles. In my church the order of the candles are hope, peace, joy and love with the center candle being for Christ. It is also said that the four candles each represent 1000 years for the total of 4000 years from the time of Adam and Eve until the birth of the Savior. (Source) In some traditions the first candle is for prophecy or expectation, and the other three can represent Annunciation, Proclamation, Fulfillment or parts of the Christmas story like Bethlehem, Shepherds and Angels. (Source) 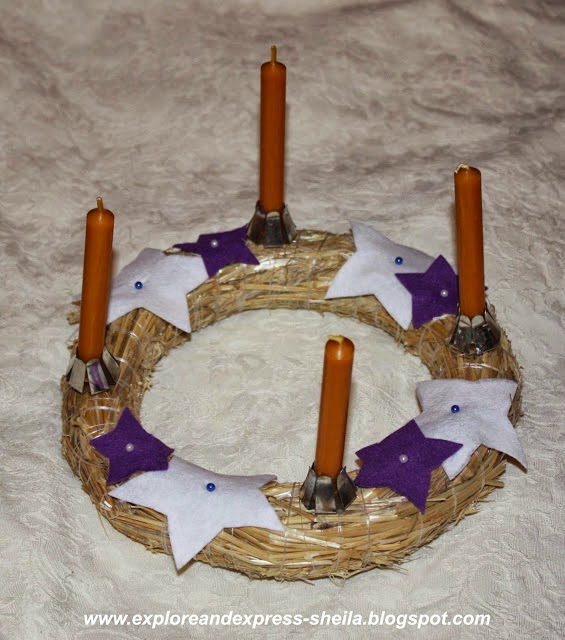 There are some variations on the Advent Wreath. For example the Advent wreath above from Sheila at Explore and Express. The use of straw is traditionally a Norwegian style, however Sheila got the idea from a German blog. (She provides a tutorial.) 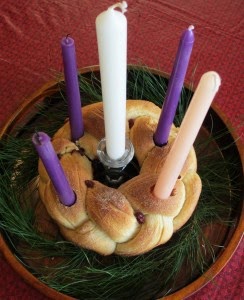 A Danish variation is to use bread as the wreath. The one pictured above is from Christy at One Fun Mom (she shares the recipe and tutorial).  Advent wreaths also can be hung. Here is one from Germany hanging in a church.

The Advent calendar was originally used to teach children about the Christmas story and Jesus; however, parents quickly realized that it also could be used to help with the child’s behavior leading up to Christmas. Most are now just used as a countdown to Christmas. There are many versions of the Advent Calendar, from store bought ones with pictures behind doors or chocolates to homemade ones. There really are no rules about them besides that they usually begin on December 1st and count down to Christmas Eve. We have a wooden Advent calendar that my parents gave us one year. I believe my mother said it was Scandinavian, but cannot remember for sure. 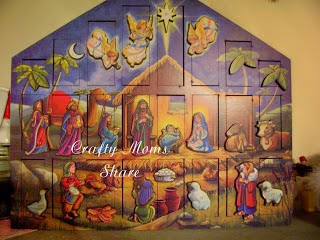 Other Customs by Country

The use of Advent calendars dates back to the 1800s in Germany. In Southern Germany Advent is the time of Knocking Nights. This is where the children go door to door making much noise and get candy or money as a treat.

In Denmark Calendar Candles are popular. These are candles that get burned a certain amount each night until it is finished on Christmas Eve. They often make their own Advent Calendars and they have Advent Calendars or Christmas Calendars as they call them in schools. Some teachers have each child bring a small wrapped package for the Christmas Calendar and then the students get a turn opening a gift one of the days. Nisse decorations come out or are made as well. Nisse are equivalent to Santa Claus’s elves. The entire family also works on cleaning the house and yard as well as stables or barns if they have them. This must be completed by Christmas Eve. (One Source)

In Finland the Advent wreath is at churches and homes. Candles play an important part of the Advent season and often yards have ice or snow lanterns with a candle burning in it. Advent is also a time of Christmas parties at work, groups and friends. (One Source)

In the Netherlands there is a big parade for Sinterklaas Day, December 6th (St. Nicholas Day). Some sources say this happens on December 5th.  Sinterklaas arrives by boat and then is taken through the streets of a city or town. Then Sinterklaas delivers candies, nuts and treats for to the children in their shoes that they leave out. (One Source)

In Mexico the celebration begins on December 16th. They have a nine-day Las Posadas procession. During Las Posadas a boy and girl are chosen to play Joseph and Mary and they go to houses each night looking for a room. The rest of the procession carries lanterns, candles and often an empty manger. Often the procession sings asking for a room and the people in the house respond in song. A star-shaped pinata is typically broken and then a meal is shared by all. The other Mexican tradition is the Nacimientos which are small often homemade creches. (One Source)

In the Philippines the season begins on December 16th at 4 a.m. when the church bells ring and the Misa de Gallo begins. The Misa de Gallo is the Mass of the Rooster in Spanish. Some believe this daily early morning mass is a way to show penance. The Philippines has also earned the title of longest celebrated Christmas season. The Christmas carols start in September and last into January. A traditional decoration in The Philippines is a parol which is a star-shaped lantern. Traditionally they are hand-crafted and lit with candles, but now there are also electric ones. (One Source)

In Puerto Rico a tradition is parrandas. Parrandas is the Puerto Rican form of caroling. Friends gather late at night and go from house to house singing Christmas carols. The singers must wake the homeowner, who has been given hints to be prepared for the singers. At each house they party for a bit and often the homeowner joins the group. (One Source)

In Ukraine the houses must be fully cleaned before Christmas. All the field work and harvest must be done by December 4th, Feast of Presentation (celebrating when Mary was presented at the temple as a child). Many people also partially fast through Advent. (One Source)

In Switzerland a big celebration is on December 6th, St. Nicholas Day. There are processions called Klausjagen from Lake Lucerne. People wear large bishop’s hats lighted with a candle in honor of St. Nicholas. (Source)

This is a sample of some of the different ways  Advent and the pre-Christmas season are celebrated in different lands. Please visit the rest of the blogs hosting Christmas in Different Lands and learn about Christmas traditions around the world!

Additional sources for this post include The World Book Christmas Series (there is a book for each place discussed)and Catholic Online.