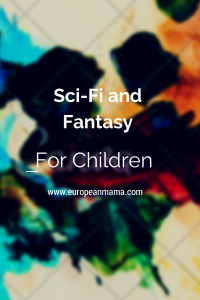 I must admit I am a little bit of a geek. But as Wil Wheaton has put it, “being a geek is about what you love”, and I second his definition wholeheartedly. The thing I love most is books. Books in all shapes, sizes, written in all kinds of styles. I love them all and hardly have I ever quit on a book. And fantasy and science fiction are among my very favourite genres.

Surprised? I know that they’re often not considered “real” literature. Especially fantasy is often laughed at for talking about fairies and wizards and dragons, while sci-fi has at least the word “science” in it which generally makes it the more approved genre.

I however really think that all children – and our little global citizens specifically – should read these books. Why? Here are at least some reasons. I am sure there are more.

The cool thing about fantasy and science fiction is that they tell stories about worlds that don’t exist. It takes some imagination to write about something that isn’t reality. Many characters in the books are not human. I guess after you’ve talked to someone from another planet, meeting someone from another culture isn’t so scary. Additionally, a lot of fantasy is about Otherness. Sometimes, it’s scary, like the Others in George R. R. Martin’s A Song Of Ice And Fire. Sometimes it gives you additional powers, like the Others in Sergey Lukyanenko “Night Watch” series. But look closely and you will see the “other” motive more clearly.

The writers who write sci-fi and fantasy not only have to invent a whole new world with consistent and reasonable rules, they also have to think of a language- and sometimes even multiple languages to go with the world. Tolkien himself was interested in languages and considered them a foundation of his work. The whole “Lord of the Rings” trilogy features at least 3 of them. The “A Song Of Ice And Fire” series, better known as “A Game Of Thrones”, features at least 5. There is an interesting point about making the TV series because the author hasn’t considered how Dothraki would actually sound, and they made a whole new language just for the series! It’s not the first time a new language was invented when a film was made out of a sci-fi or fantasy film. But it can also foster interest in existing languages: I personally know at least one person who learned Finnish because it’s the closest language to Elfish! Also, if your native tongue isn’t English, you soon will find yourself get bored with waiting for the books to get translated and will read the original- that’s how my brother read the Harry Potter books. And did you know that the town of Sto Lat in Terry Pratchett’s novels was named after a Polish birthday song- Sto Lat means, “Hundred Years”!

Many fantasy books are based on real historical events, countries and persons. For example, the Wall in George R. R. Martin’s “A Song Of Ice Fire” reminds me of the Great Wall of China, GRRM himself said that “ASOIAF” was based on the War of the Roses in Medieval England. Terry Pratchett’s Discworld Series is seemingly a book about wizards, witches and dwarves, but in fact each instalment to the series tells a different story based on real events. One for example is about feminism (“Equal Rites”), another is about the history of Rock Music (“Soul Music”), or even about the history of the cinema (“Moving Pictures”)!

4)      Reading books from other cultures

Both fantasy and Science fiction are actually quite diverse. For example, if you watched the movie, “Solaris” you may not have known that the book the film was based on was written by Polish writer Stanisław Lem (the “ł” is pronounced like “w” in “window”). Additionally, fantasy or sci-fi in one culture is not the same in another. For example, Polish anti-hero Jakub Wędrowycz is an exorcist, he drinks spirit that he brews himself and he is a character you wouldn’t want to meet in a dark alley. And the “Night Watch” series by Sergiey Lukyanenko will give you a totally different idea about what Twilight is- in the books, it’s a different level of reality that only Others can access.

I know that sci-fi or fantasy is not exactly considered “great” literature. But it could get your child started on reading. And besides, some of the sci-fi and fantasy authors are very fine writers! The cool thing about this genre is that it can get you started in many directions: from history books, through great literature (consider, for example, the Arthurian tales) and other books!

Sci-fi and fantasy have a strong loyal community worldwide. Global Citizens and TCK’s often feel out of place, but maybe their interest in this genre can give them a sense of belonging. I think it’s amazing that a common interest brings together people from different countries who don’t necessarily speak each other’s languages. In fact, sci-fi and fantasy are often read by people who feel they don’t belong anywhere but find support and friends through their hobby. These books often turn into something more: an opportunity to get together, play games, talk about common interests and have fun. 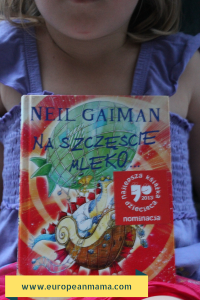 Not only readers of various languages will appreciate these great books. Readers of all ages will too. While many sci-fi or fantasy books are written with an older audience in mind (young adults to adults), children can enjoy them too- I think they’re so much better than the traditional fairy tales! A great example is Neil Gaiman’s “Fortunately, The Milk” (the photo above shows it in Polish), that can be read to children as young as 5 or 6. The Harry Potter series is meant for slightly older children (except maybe for the later books that are scarier).

There is more to sci-fi and fantasy than aliens, wizards and magic. It’s actually a great literary genre and I believe everybody will benefit from reading them, especially children. I can’t wait to introduce my own kids to all these magical worlds!