The World Cup is truly a multicultural event – global in a way that virtually no other sporting event is. For many, attending the World Cup is a lifelong quest or dream. I’ve followed the World Cup with a little bit of jealousy through the Facebook thread of a friend of mine, another multicultural mama, who is actually in Brazil and has been able to attend several games. I decided to ask her a few questions about her experience and about raising her daughter bilingually – only to be corrected and informed that, now that they’ve moved to Brazil, they are raising their daughter to be trilingual! It was fun to get her first-hand account of the World Cup. 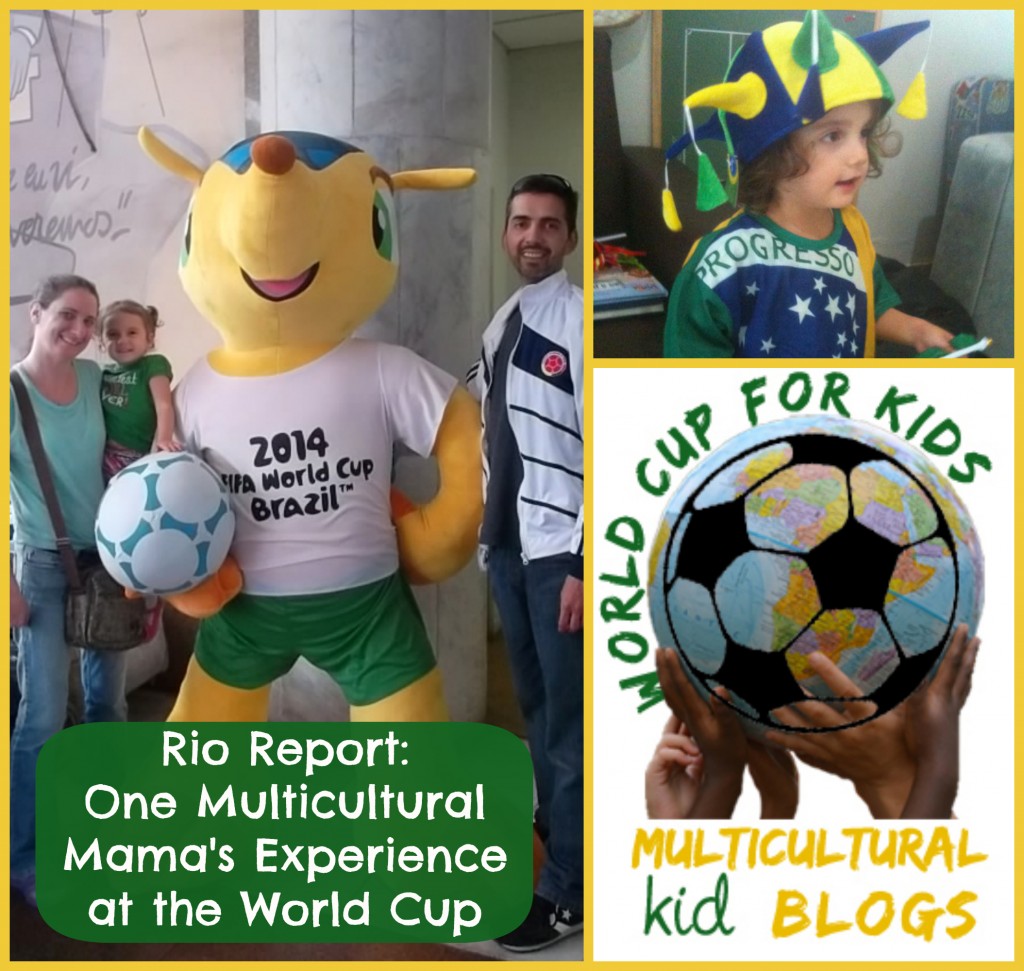 Adrienne is from Texas and married to a Colombian. She lived in Colombia for 6.5 years, and moved to Rio de Janeiro in February of this year. She has an almost three year old daughter. Here’s a little about her experience of the World Cup.

Q1: How have you seen the World Cup bring “the world” together?

People from all over the world are here for the events, not just the countries competing but from all over. Rio de Janeiro is a diverse city anyhow, but even more so right now. I have seen competing team fans hug one another and shake hands.

Q2: How many different languages have you heard spoken?

I’m not good at recognizing other languages but there have been a lot! Spanish has been a big one here. French and Dutch are also being heard all over the streets here in Rio.

Q3: Have you seen families involved with the World Cup? If so, how?

Many families are attending the games together. In Rio, we saw lots of families at the Fan Fest and at a practice for the Dutch team.

Q4. Why did you decide to attend the World Cup?

Several years ago, while we were living in Colombia, we found out Brazil would be hosting the games. Immediately, I chatted with my best friend who is from and lives in Brasilia (the capital) and reserved her couch to sleep on for the games. We figured Brazil was close enough to Colombia that we could try to attend something. We had no idea we would be living here for the games. My husband loves the sport and I have grown to enjoy it, too. Fast forward to a few months ago, shortly after our arrival in Brazil we realized FIFA was selling tickets to the games. Since all the games in Rio de Janeiro (where we live) were sold out, I bought some tickets to games in Brasilia and reminded my friend that the couch was reserved years ago for us. She responded by saying the couch would be too small for our family and we would have to stay in her guest room and she even offered to watch our daughter while we attended the games. We attended two games in Brasilia. Each one was special. The first one we watched was Ecuador vs. Switzerland. This was special because almost 20 years ago I was a HS exchange student to Ecuador. The next game we watched was Colombia vs. Ivory Coast. We chose to attend this one since my husband is from there and because we lived there for so long. Once Colombia advanced and we were back home in Rio, we got lucky and a friend offered us some tickets to a round of 8 game here where Colombia beat Uruguay. 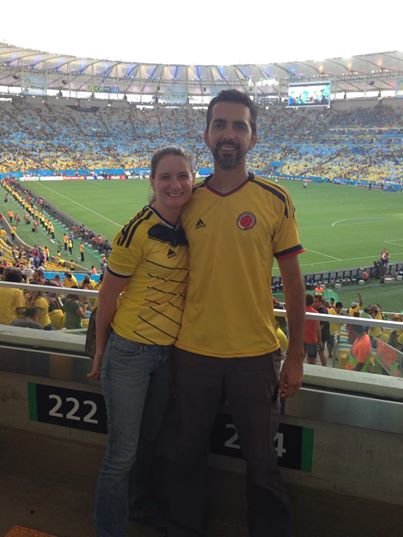 Q5. What is your favorite thing about your multicultural family and how do you balance two languages – or do you just focus on one language?

Actually we are balancing three languages now: English, Spanish and Portuguese. I love having an almost trilingual almost three year old daughter. My husband and I have always spoken English with her directly since birth. She picked up Spanish in Colombia from extended family, her nanny and preschool. Now she is attending preschool in Brazil from 8am to 5pm each day and all they speak is Portuguese. We are lucky to use Facetime so she can keep up the Spanish with Jorge’s family and many of our friends here in Brazil are Spanish speakers that she is still exposed to it. I feel this approach has worked well for us.

I’ve enjoyed Adrienne’s first hand account of the World Cup. It also reminds of how travel can change lives and create amazing experiences that stay with us forever. Adrienne met her husband in Colombia and the seeds for living abroad were certainly planted when she was a foreign exchange student in Ecuador in High School. As for me, I met my husband while studying abroad in Cairo Egypt; he was a Bostonian studying abroad in Cairo as well and thus the Texan and Bostonian met. Not only do travel experiences expand our worldview and enrich our lives, but sometimes they also lead to love! 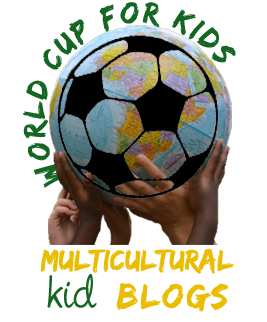 Jennifer is a mom of two, as well as an independent filmmaker who has taught filmmaking to youth, most notably with her Spotlight On Hope Film Camp, a free film camp for Pediatric Cancer patients. She writes about her experiences with Wild Thing and Caterpillar at The Good Long Road with an emphasis on mindfulness, imagination, and creative activities related to her toddler and preschooler’s favorite children’s books. You can also find her on Facebook, Twitter, Pinterest, and Google+.