In much of the Northern hemisphere, things are warming up. Here in Singapore, it’s the same old temperature and humidity as always. You want to know some beat-the-heat strategies from a country with year-round summer? Why on earth am I punctuating that with a question mark? 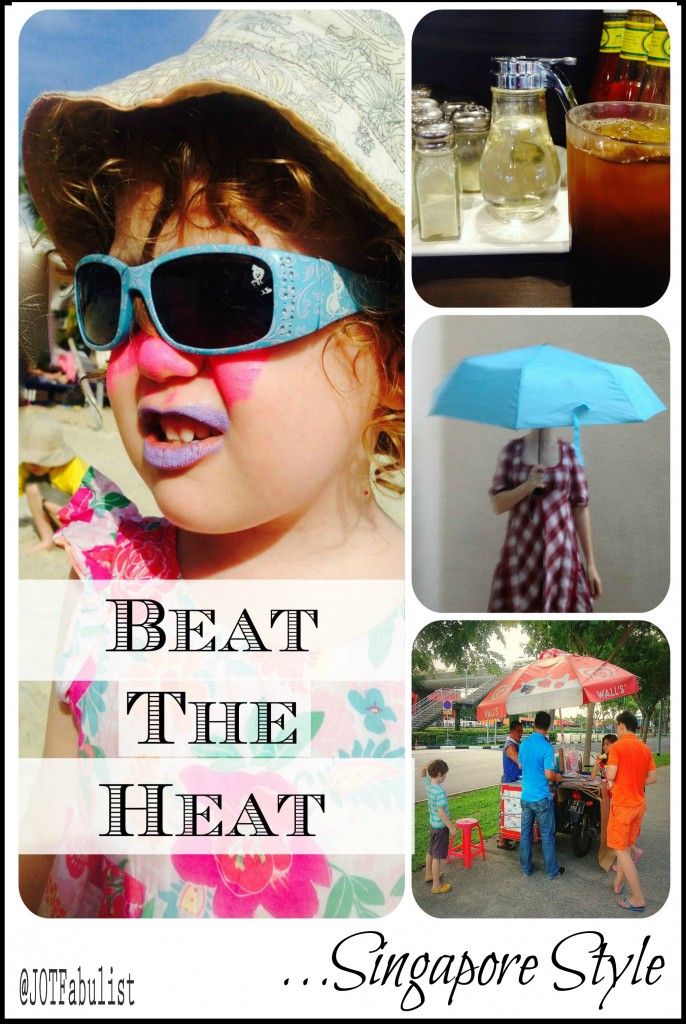 You know about hats. They’re great for little kids who don’t have enough hand-eye coordination to avoid poking anyone’s eyes out.

For the rest of us, there are umbrellas. Umbrellas are superior to hats, because they provide more shade, allow ventilation around the head, fold neatly into your handbag when you don’t need them, double as rain-umbrellas in the inevitable event of a tropical rainstorm, and at no extra charge – won’t give you hat hair.

But don’t stop with umbrellas! There are other ways to make use of shade when outdoors on sunny days. You can start by choosing your side of the road according to which has the most trees to walk under, and not according to where you want to end up. Then, if stopped at a traffic light waiting for a green man, either stand in whatever shade is available even if this puts you well back from the crossing, or angle your body away from the sun in order to shade yourself, even if this confuses vehicular traffic. Don’t worry – the traffic is used to it.

And be sure to cover up. Many in Singapore clothe themselves for tradition, and the fact that their long sleeves, head scarves and sarees also help keep the sun off is a bonus. But that doesn’t mean you can’t use your own style of long skirts, sleeves, and scarves for the primary purpose of not frying your skin.

Singapore does things with ice that other countries have never dreamed of.

Not only can you get the more conventional iced lime juice, barley water, or grass jelly drink, you can also add frozen cubes to the local tea and coffee. For extra credit, order it “packet” – take away – in a plastic bag with a straw (top tied for transport, or untied for refreshment on the go).

Don’t fret if you prefer a more European-style iced tea or coffee, though. Just remember to sweeten it to taste using the clear syrup instead of the granulated sugar (which won’t dissolve very well in an iced drink).

Ice in beer is more controversial amongst the international beer-drinking community, and participation is left at the discretion of the individual drinker.

Stay In (Til Dark)

Shade and ice are great ways to keep cool when you’re out, but Singapore has gone so far as to question whether you need to go there. Malls are famous not only for their sometimes over-active air conditioning (get out your scarf again), but also for providing an indoor village vibe, complete with everything from public libraries to kids’ playgrounds; ice skating rinks to canal boats. And if you want something closer to nature, you can try the climate-controlled domes at Gardens By The Bay.

Too far from home? You could always hang out on the void deck of your HDB apartment block.

Or just follow the lead of local children and fitness fanatics, who come out at night. Lots of local kids nap during the afternoon, then stay up late. You’ll find outdoor playgrounds busy from five to ten pm, and in the early morning. Likewise, joggers emerge once the sun sets, with many bike clubs waiting til after midnight, when the traffic also subsides.

At times, we ignore all this in favour of the same tricks we’re used to from home: hats, sunglasses, lots of sun cream and plenty of drinking water, long-sleeved swim wear, and a beach, pool or splash park. It’s good to have a fall-back in the unlikely event someone turns down syrupy beans with shaved ice.

Bronwyn Joy lives in Singapore, which is handy for her children, husband, and job, which are all there, too. She writes about kids, travel, geography, history, culture, social responsibility, logistics, marine biology, civil engineering (and sometimes, coffee or wine) over at Journeys of the Fabulist. Her hand-eye coordination is truly not that good.

I write about kids, travel, geography, history, culture, social responsibility, logistics, marine biology, civil engineering, and sometimes, coffee or wine (plus anything related) but MOST FREQUENTLY AND USEFULLY about how we manage to travel with young children, how we get along as foreigners in Singapore, and the stuff we accidentally teach our kids.