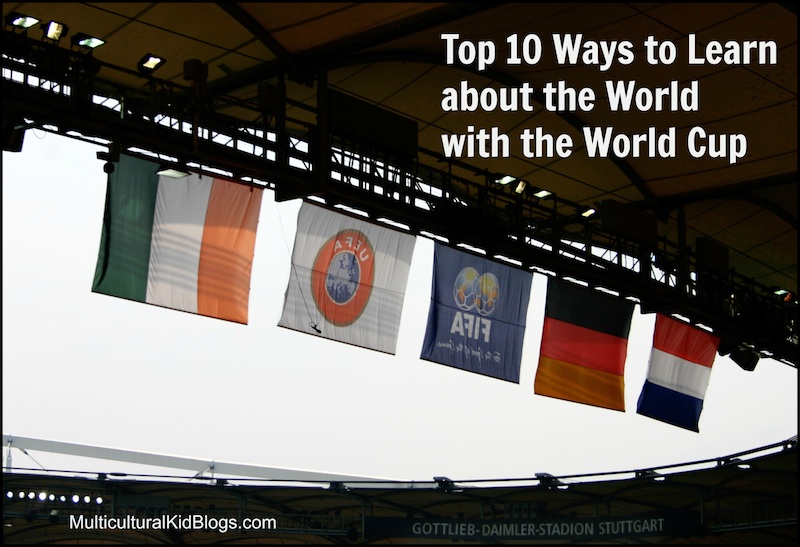 This post is part of the School’s Out! Top 10 Summer Blog Hop (see below for details).

The FiFa World Cup combines sport and culture on an enormous scale. How can you help kids learn from an event that spans the globe and a full month? Explore these 10 features of the World Cup to help kids understand more about the tournament and the world.

Soccer starts conversations and establishes connections all over the globe. Whether your child is already a fan or is new to the sport, the World Cup is an opportunity to learn more about the beautiful game. Mommy Maestra and Delightful Children’s Books have lists of soccer books for children.

Each team playing in the World Cup is a country waiting to be explored. This map from Activity Village is an excellent place to start. Use these articles organized by country to learn more. Look for a new post on each country, each time its team plays! This World Soccer Cup 2014 Activity Pack also has great materials to help children learn more about the 32 participating teams.

Each World Cup since 1966 has had an official mascot. These cartoon characters are a fun way for kids to see where the tournament has been played. The designs show a typical feature of the host country, such as a costume or animal.

The mascot for 2014 is Fuleco. He is a Brazilian three-banded armadillo, an endangered species found only in Brazil. Fuleco has his own website, and even has a Twitter account where he shares kid-friendly information about the World Cup in English and Portuguese. 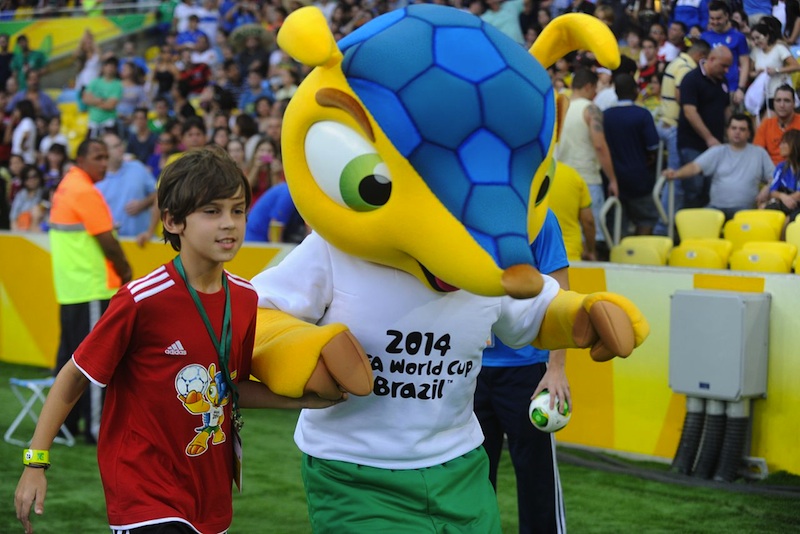 Each Fifa World Cup has one official anthem and several other songs used to promote the event. The anthem is usually in several languages including English, the official language of the host country and Spanish. In addition to being a fun way to practice language, the songs introduce kids to artists from different nations.

The 2014 official song is We Are One (Olé Olá) by Pitbull and featuring Jennifer Lopez and Claudia Leitte of Brazil. The song is part of One Love, One Rhythm: The 2014 FIFA World Cup Official Album.

Learning about how the soccer ball has evolved gives kids a glimpse into the history of the game. Read the about the ways the ball has changed.

In addition, each World Cup has an official ball that you can read about on Soccer Ball World. This fun 30-second video shows the evolution of the World Cup ball from 1966 to Brazuca, the official ball in Brazil.

World Cup players will capture the hearts of children and teach them about much more than soccer. Players share their feelings about winning and losing, fitness and what they value. Kids can read an interview with Lionel Messi in Time for Kids and a 24-hour food diary by Uruguayan player Diego Forlan. They can also read player anti-discrimination interviews with both men and women that FiFa has collected as part of an anti-racism and anti-discrimination campaign.

The World Cup offers language learning opportunities for children of all ages and levels. Beginners can practice numbers with scores and statistics, days of the week with a schedule in the target language and pronunciation with players’ names. More advanced students can read biographies of players on the team web site and watch player interviews on YouTube. You can adapt these ideas for learning Spanish with the World Cup to any language.

From amazing animals to soccer stars, Brazil has everything to capture a child’s imagination. The Embassy of Brazil in London has many resources to teach kids about Brazil. Be sure to check out the activities under Brazil in the Primary School Fact Sheets and Brazil for Kids, a 24-page copyright free publication. National Geographic Kids is also a good place to start to explore this vast country.

Countries, individuals, languages and cultures come together each time two teams face each other in a World Cup match. The games are a chance to talk about the different elements, and above all, the sport. Undoubtedly your child will have questions as she watches. Follow her lead and learn together as you look for information. You can find the complete schedule here.

The World Cup is a natural springboard for talking to kids about the shared human experience and the challenges that face us as global citizens. Brazil’s president Dilma Rousseff said in her welcome, the 2014 World Cup will “be the Cup for peace and against racism, the Cup for inclusion and against all forms of discrimination, the Cup for tolerance, for dialogue, for understanding and for sustainability.”

Help your child learn about global concerns by reading about initiatives like the One World Futbol Project and The Homeless World Cup. FiFa also has a variety of social responsibility projects. There is an Anti-Racism Project with player interviews and a campaign where kids can send in a selfie with #SayNoToRacism banner (a random selection will be shown before the quarter finals). In conjunction with Sony, there is a photo contest for young photographers. Learn more about the contest and follow the link in the article to vote for your favorite picture.

This post is part of the School’s Out! Top 10 Summer Blog Hop organized by This Reading Mama.  For a full list of all the amazing posts in this series, visit the main page.  Be sure to check out Top 10 Ways to Travel the World Without Leaving Home and Top 10 Tips for a Road Trip with Kids.

Jennifer raised her three children speaking English and Spanish, and she has been teaching Spanish to other young world citizens for over twenty years. On her blog Spanish Playground, she shares resources for parents and teachers of Spanish language learners.

Latest posts by Jenny B (see all)