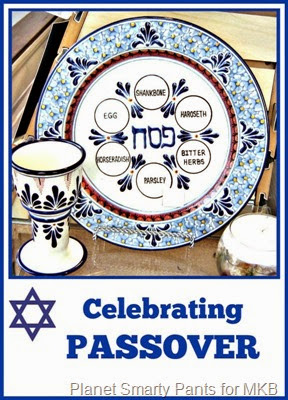 Disclosure. “Creative Commons Seder Plate” by Karen is licensed under CC BY 2.0. I am an Amazon associate and this post contains affiliate links. For full disclosure, please click here and thank you for supporting my blog!

Passover of My Childhood.

I was raised in an atheist family in the former Soviet Union. My grandparents on both sides were “true believers” in Communist Party and chose to raise their children completely non-religious. In fact, my paternal grandfather’s name was Moses, but he wouldn’t tell me what the name meant. I grew up thinking that it’s just a funny “old name” that is not in use any longer. Nevertheless, every spring my father’s Mom would get everyone together for a Passover dinner. Before that dinner, my Dad and I would drive to a tiny rundown building in Minsk with a strange name “synagogue”. There would be a line of people all coming there with the same purpose – to get matzah bread for Passover celebrations. It didn’t matter that my grandmother’s dinner featured regular bread and freely mixed milk and meat – it was still a holiday that was not celebrated by anyone else I knew and made me wonder about why we are special. It also made me wonder why the adults are saying, Next year in Jerusalem when I knew fully well that nobody was going anywhere any time soon.

Connecting to Our Roots

I came to US as an adult, and now we celebrate both Passover and Easter in our non-religious house as a way to connect to our roots and celebrate our heritage. I want my daughter to know that she has a Jewish part in her, just as she has an Orthodox Christian Russian part of my maternal grandmother and German heritage from her father who was raised Lutheran. My seven year old is really looking forward to Passover. When she is older, she will be free to choose whether she wants to become a Christian, a Jew, choose any of other religions of the world or stay an agnostic like us. In any case, I am hoping that she will still celebrate Passover as a holiday that connects her to her Jewish roots like it connected me in my childhood.

The Story of Passover is one of the best known stories from The Old Testament that came into even non-religious Western living rooms with the famous The Ten Commandments movie and with Disney’s The Prince of Egypt. The Story of Passover by David Adler gives a great overview of the story for younger children. You can also read a very short “executive summary” of the story on Passover for Kids.

How Is Passover Celebrated?

The most important part of Passover celebration is the feast on the first day of Passover called Seder. Seder means order, and the proper Seder includes 15 steps, where each step is steeped in tradition that was passed over for many generations. You can read more about 15 steps of proper Seder on Jewish Kids site. 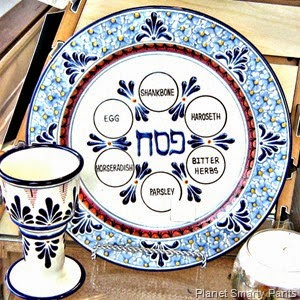 I have to say that since we are not a religious family, we don’t follow Haggadah (a special Passover book), we don’t do all these steps, and we don’t even have a proper Seder plate like the one pictured above. I guess on my next visit to Israel I might get one for us, but we are using a plain plate for now. There are several traditional foods on this plate reminding us of different parts of Passover story. Two bitter foods (horseradish and bitter herbs) is a reminder of bitter slavery in Egypt. Haroseth is a mixture of apples, chopped nuts and wine that has a texture of mortar that was used by slaves while building houses and palaces for the Egyptians. Parsley reminds us of rebirth and a roasted egg is a reference to other Jewish festivals and, yet again, to rebirth and new life. Finally, a lamb shank bone (or a beet root for vegetarian families) represents a lamb blood that was smeared on doorposts of the Israelites, so the Angel of Death would pass over their houses during the tenth plague.

Things We Love About Passover

For me Passover is a chance to get friends together for a special dinner that is not the same as usual weekend dinners in our house. It’s also a great chance to introduce our international smattering of friends to this part of my heritage.

My daughter really likes making and eating haroset. Her other favorite part of Passover celebrations is looking for Afikoman. Afikoman is a piece of flat matzah bread that is hidden early during Seder celebrations. Children are supposed to look for it later and get chocolate or small prizes for finding it. She is slightly concerned about Elijah’s visit – she keeps asking if Elijah is going to be visible if he comes or is he going to be a ghost, but she is really looking forward to Passover celebrations this year. Natalie was born in Belarus and lives  in California with her German husband and one daughter. Natalie blogs at Planet Smarty Pants about playful literature-based activities and nurturing engaged thinkers through science, engineering, and math. She works full time for a big tech company in Silicon Valley. Follow Natalie at her blog, Facebook, Pinterest, and Google+.

Natalie is an engineer and a project manager working for a big technology company in Silicon Valley. She was born and raised in the former Soviet Union, married to a German and raising her daughter to be knowledgeable and respectful of different cultures and traditions around the world. Natalie is passionate about supporting gifted children and all things STEM.