To honor the amazing achievements of black people throughout the world, members of the Multicultural Kid Blogs are going to highlight a person or event in the Worldwide Civil Rights Movement and link up to the blog hop here. This way there will be one place for all to come and gather some of the history. We invite you to share your activities about the Civil Rights Movements as well here. To help you get started I thought I would share some general Civil Rights Movement picture books. 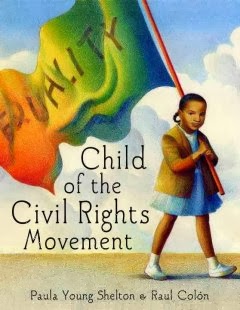 Child of the Civil Rights Movement by Paula Young Shelton and Raul Colon personalizes the civil rights leaders in the United States. At age four, Paula joined her family in the first day of the march from Selma to Montgomery. After a short time she was carried and passed along to all her “aunts” and “uncles”, they referred to the other civil right leaders as aunt and uncle. She also shares her memories of seeing Uncle Martin at the YMCA pool and running into his arms and of the many dinners they had with their civil rights family where the adults were planning the next action. At the end of the book, there is a paragraph and photograph of the civil rights leaders she discusses. 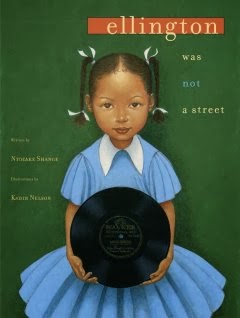 Ellington Was Not a Street by Ntozake Shange is a simple text that goes through memories of the people of the Civil Rights Movements and how some things have now been named for them or have become common place in our minds. It is again written by a child of a civil rights leader remembering the gatherings at her house and the things that happened around her. 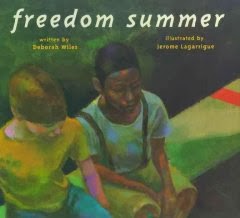 Freedom Summer by Deborah Wiles is a fictional story based on real events. In her own note, Wiles discusses how she felt the summer of 1964 when she began to realize how differently black Americans were treated from white Americans like herself and she imagined what it might be like to be a black child her own age at the time. The story describes how two friends a black boy and a white boy play together while the black boy’s mother works for the white boy’s mother. They discover that the black boy is not allowed all the places the white boy can go and they question what is really going on. After the Civil Rights Act passes, the town pool closes instead of opening it to the blacks. It goes through how two young friends may have experienced the events of the summer of 1964. Grandmama’s Pride by Becky Birtha is a fictional story about a black Northern girl who visits her grandmother every summer down in the South. Her mother has told the girls that the back seat on the bus down is the best for them and they always take it. When the bus stops for the white people to buy lunch the mother reminds them they packed their lunches. The girl does not understand why their grandmother insists on walking everywhere and not taking the bus. She also does not understand why her grandmother, aunt and their minister (who has a car) wait in the stand only waiting room at the bus station until that summer when her aunt teaches her to read. Then she sees the “White Only” signs and starts to realize what is going on. She begins to make excuses like her grandmother does for her little sister instead of explaining segregation to her. Then one summer when she goes to visit, they no longer have to sit in the back of the bus and they sit in the front.  It is a wonderful story about how northerners dealt with segregation. 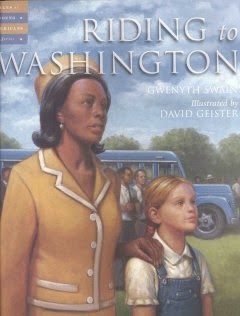 Riding to Washington by Gwenyth Swain is a fictional story about a white girl from Indiana who takes a bus to Washington with her father and his black co-workers and their families to hear Dr. Martin Luther King, Jr. speak. She does not understand what is really happening. The bus ride down shows much of the discrimination from no place to stop for dinner that would serve a mixed racial group to the bathroom at the gas station. At the gas station one of her father’s co-worker’s wife gets off to use the bathroom, but there is a sign saying “No Coloreds”, the girl gets off with her and they go in to get the key holding hands. She convinces the man to let them use the bathroom. Then in Washington she realizes how important Dr. King’s speech really is.

Join the discussion in our Google+ community, and follow our Black History board on Pinterest!  You can also share your own posts about Black History below.