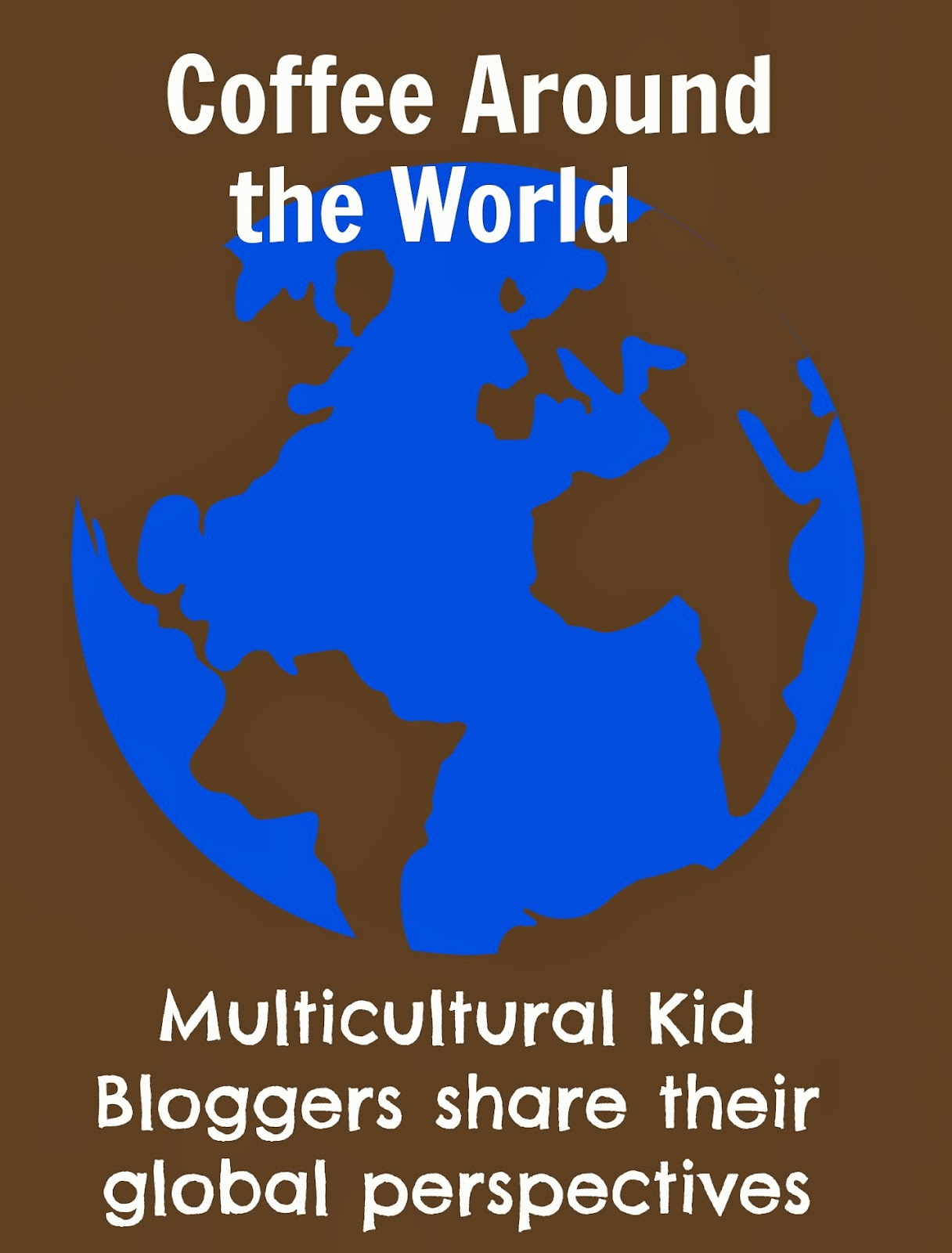 Some might argue that coffee makes the world go round. I thought I’d at least explore how coffee drinking varies around the world, and National Coffee Day (for me, here in the U.S.) seemed like the perfect time to do it.

In the U.S., it is estimated that 85% of American adults drink coffee. As I’m thinking about coffee in a global perspective, I’m realizing that your morning cup of coffee could be a good conversation starter for some geography and/or multicultural learning. Where does your coffee come from, originally (meaning not the grocery store or coffee shop)? How does it get from place to place? Why does coffee grow better in certain areas? How does coffee drinking vary according to one’s culture?

In celebration of all things coffee as I myself love my morning cup of jo’ – here’s a look at coffee drinking around the world from the talented bloggers of MKB.

I’m starting off with Stephanie, of InCultureParent, who shares a fabulous breakdown of coffees from various countries showing the diversity and treasure that coffee is in many countries.

Her husband is from Morocco, and says that there coffee “when served at home [it] is more like sugar and milk with coffee as it’s always milky and sugary.”

The two countries she ranks highest for quality coffee are Italy (no surprise) and Germany (a bit of a surprise): “A little known secret of Germany is it has excellent coffee, much like Italy. No, there aren’t little espresso bars you can just pop into for a quick five-minute latte like in Italy, but there are excellent coffee shops everywhere with fantastic coffee and a refreshing lack of chain coffee shops.”

She rounded out her personal coffee around the world drinking knowledge with Ecuador: “..for a coffee-exporting nation, the everyday domestic coffee of so many families is Nescafé! At first I balked at mixing a tablespoon in with my hot water but soon developed a fondness for the artificial coffee if served sugary and milky.” — Now that is some serious coffee knowledge!

Kali from For the Love of Spanish also shared a memory of Nescafe: “In Peru my host mom always served us Nescafé with sweetened condensed milk and sugar. I actually grew fond of the taste and have tried to recreate it back home in the states, [however] the best coffee I’ve had is a café con leche in Spain.”

For another take on coffee from the Americas, Leanna of All Done Monkey and the fabulous wonder woman who made MKB possible, shared a photo of her coffee maker: 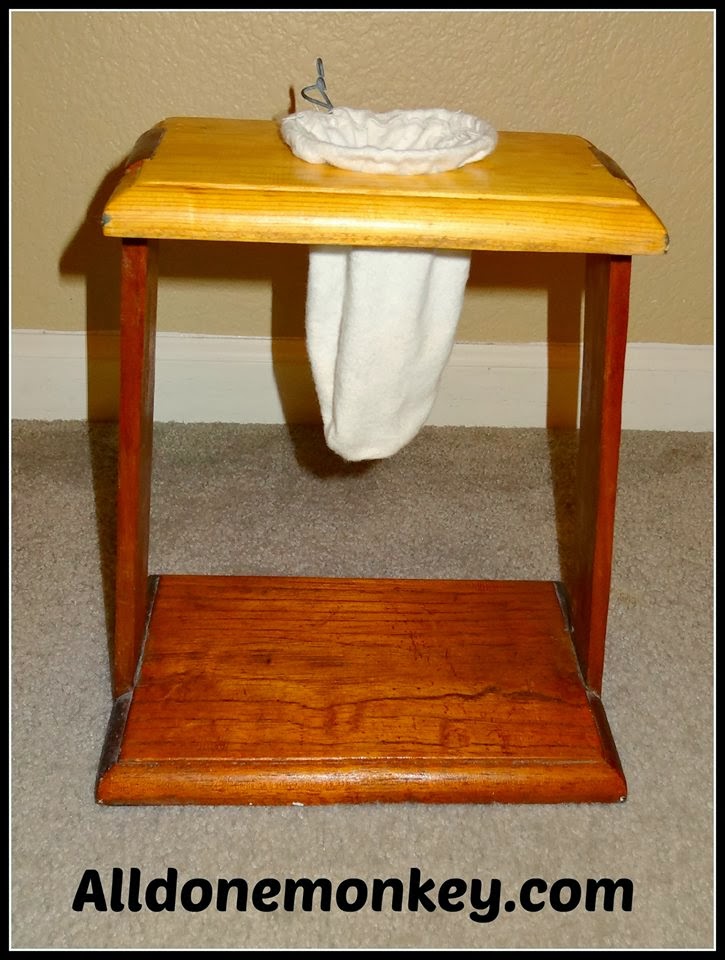 “This is a traditional coffee maker from Costa Rica. The ground coffee beans are put in the white sack then boiling water is poured in the sack, so that the strained coffee drips into a coffee cup waiting below. While many people have switched to electric coffee makers, many still prefer this traditional method. In Costa Rica, the afternoon coffee break is still a cherished time, as family and friends relax together with a cup of locally grown coffee and a snack (bread, cookies, etc.)”

Would you have guessed that this was a coffee maker? I wouldn’t have, though I also prefer a non-electric coffee maker going with an Italian stovetop coffee maker, which was also the type of coffee maker my husband’s mother, from the Dominican Republic, preferred. Here’s a photo of it, taken by my (then) 2 year-old! 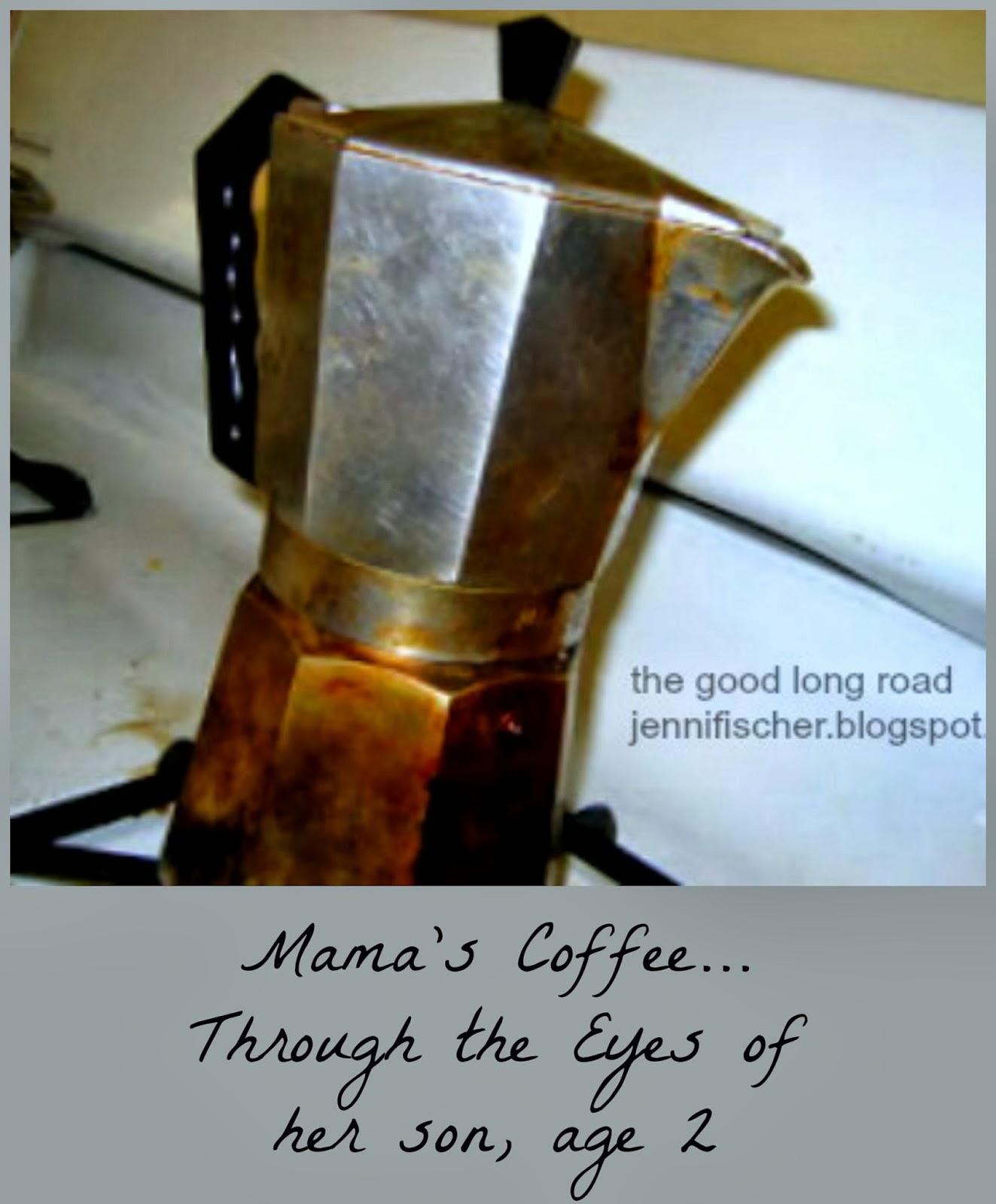 And, just for fun, an art piece we made using that photo (and a few others). 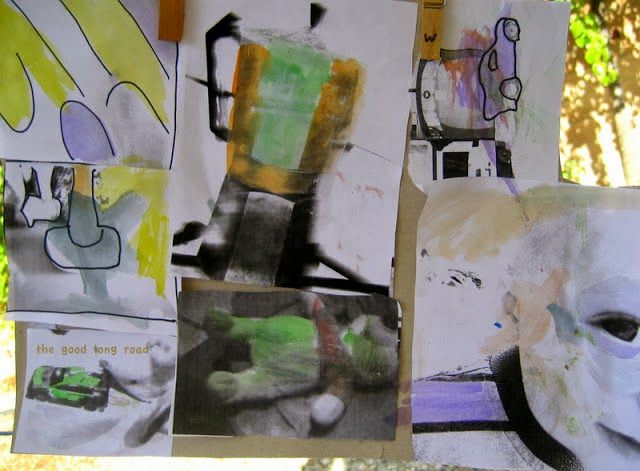 Natalie of Afterschool for Smartypants shares her first memories of coffee growing up in Belarus: “It was instant coffee that was “hard to get” at the time of my childhood. I remember the cylinder tin cans it came in. My Mom, however, preferred Turkish coffee made in a special pot. My German husband loves coffee as well – we take ours with milk and no sugar.”
Varya, a former coffee addict, did the unthinkable and stopped drinking coffee! Read all about it! She still loves the smell of coffee, though, and goes to Starbucks in China where she lives to get her “fix.”
Ute is another former coffee lover who no longer drinks coffee, but still loves the smell. She now lives in the Netherlands where they love their coffee (or kopje koffie) : “While the average consumption worldwide is 1.3 kg per person in The Netherlands the average is at 8.4 kg per person.” (according to Wikipedia) Though Swiss, Ute grew up in Northern Italy: “In Italy we say that coffee (the espresso, ristretto ;-)) needs to be: “Il caffè, per esser buono, deve essere nero come la notte, dolce come l’amore e caldo come l’inferno!” i.e. “the real coffee needs to be good, it has to be black like the night, as sweet as love and hot like hell!”
I also want to take a moment on National Coffee Day to share two coffee projects that give back and/or promote sustainability: Coffee for Water and Long Miles Coffee Project, particularly given that coffee beans grow in many of the most economically depressed regions of the world. Coffee for Water is a company that blogger Homa Sabet Tavenger recently introduced me to as it was started by her brother-in-law. This company provides safe drinking water in for coffee growers in Haiti. Your coffee purchase supports their clean water program. And the talented Homa blogs at Growing Up Global.
Through Long Miles Coffee Project, which Jill of Moms Gone Global shared with me, I learned that 800,000 families in Burundi farm coffee and 96% of the countries foreign income comes from coffee. I already knew that Burundi was also the poorest country in the world, with the world’s lowest GDP. I learned about Burundi’s low GDP when my students at a low-income elementary school decided to raise enough funds for a school in Burundi to have a toilet. You can read that story here. Long Miles Coffee Project is the project of a family working to create coffee roasting projects that support and improve the lives of coffee farmers in Burundi. I’m interested in learning more as their projects evolve.

Now, how do you take your coffee? Is there a specific type of coffee (from a regional/cultural perspective) that you prefer – Turkish? Italian? Arabic? Are you a cream and sugar person? Perhaps you prefer it black with nothing added or super sweet? Or do you skip it altogether and stick with tea like Varya and Ute? If so, do still love the smell of coffee? For me, my morning coffee is as much about the ritual as it is about anything else. It’s my little morning moment, and I savor it.

Jennifer is a mom of two, as well as an independent filmmaker who has taught filmmaking to youth and has run after-school programs through her company Generation Arts. She writes about her experiences with Wild Thing and Caterpillar at The Good Long Road with an emphasis on mindfulness, imagination, and creative activities related to her toddler and preschooler’s favorite children’s books. You can also find her on Facebook, Twitter, Pinterest, and Google+.