When parents and educators think about Hinduism, Holi and Diwali are the two major holidays that come to mind. But, Krishna Janmashtami {john-mahsh-tah-mee}, the celebration of Krishna’s birth, is also popular, fun, and kid-friendly. It usually falls sometime during August, and it’s a great way to explore both Hinduism and Indian culture. Here are a few of our best suggestions for sharing Krishna Janmashtami with the kids in your life. 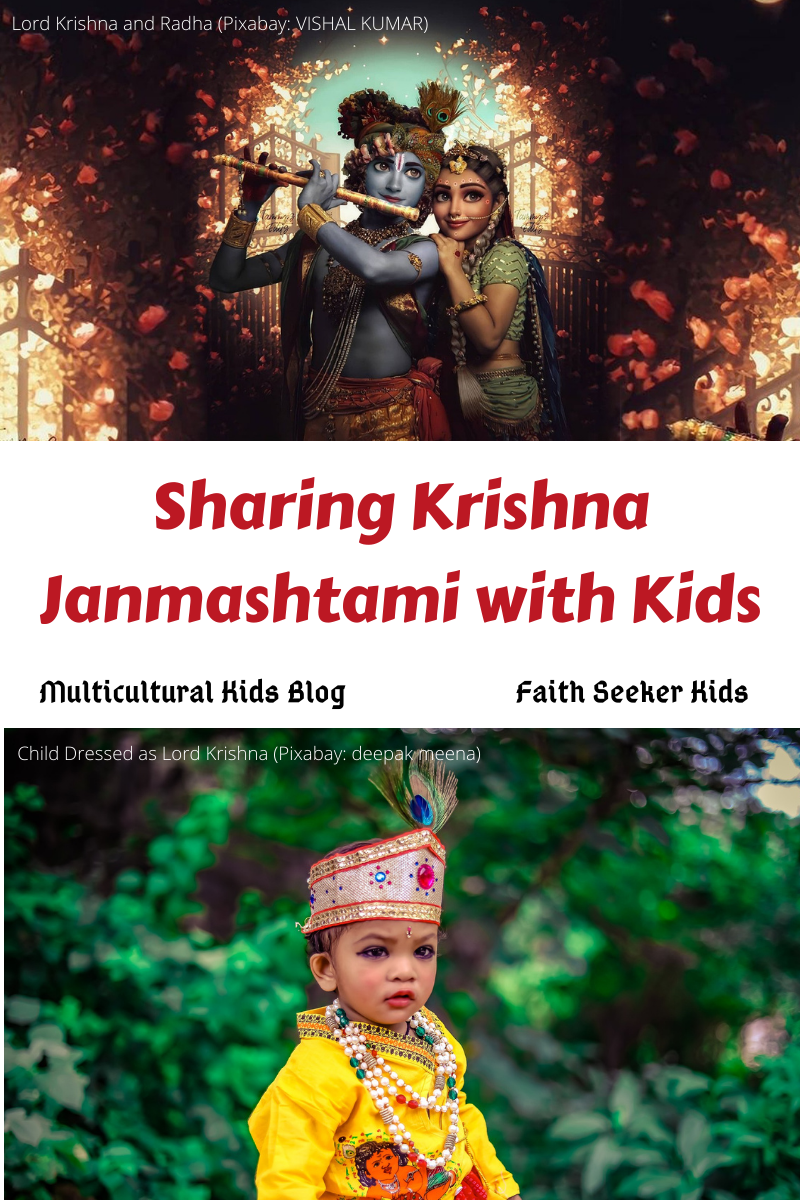 Brahman, Vishnu, and Shiva are often named as the 3 primary Hindu gods. Brahman is the Creator, Vishnu is the Protector/Sustainer, and Shiva is the Destroyer/Transformer. Sometimes, in order to restore the balance of the universe, Vishnu needs to appear in an earthly form, called an avatar. According to Hindu mythology, Vishnu has appeared as many creatures over the eons, including a fish, a tortoise, and a boar. But the 8th time he appeared, he arrived as a boy named Krishna.

Krishna as an Infant

Krishna was born as the 8th child of Devaki, the sister of the evil demon king named Kamsa. A prophecy had indicated that this would be the child to destroy Kamsa, which did not make the king very happy! However, when Kamsa tried to kill the newly-born Krishna, Krishna’s father, with the help of the deities, was able to carry Krishna to the other side of a raging river. There, Krishna was raised by his aunt and uncle.

As a fun way to remember this story, infants and toddlers sometimes dress up in Krishna costumes during Janmashtami celebrations. Many times, temple altars — where devotees make offerings of money, flowers, and food — also have baby cradles on them. This video presents one version of the Krishna birth story in English. Several Hindi options are also freely available online.

Krishna as a Boy

Krishna is also commonly depicted as a playful boy who was well-liked by everyone in his village. He, his brothers, and his friends worked in the pastures as cow-herders, and they often made a bit of mischief by swiping butter or buttermilk for tasty snacks. Cow crafts and recipes that use buttermilk make great Krishna Janmashtami activities. In some Indian communities, people even form human towers to help them reach clay pots of buttermilk that hang high in the air.

When Krishna wasn’t hanging out with his friends, he was protecting the universe by slaying demons. There are many enchanting stories about Krishna’s adventures, and several published kids’ books are available. These are three of our favorites.

All three books include the most popular legends about Krishna — being saved at birth, stealing butter, defeating the demon crane and the demon serpent, and his final victory over Kamsa. The Complete Krishna Trilogy is part of the Amma Tell Me series by Bhakti Mathur. It’s an excellent resource for anyone interested in sharing Hindu stories with kids. Geared to kids age 2-8, these books can be read in a single sitting. This is also true for The Fantastic Adventures of Krishna by Demi. The third book, The Magical Adventures of Krishna by Vatsala Sperling, has much more detail. You would probably need to read this book over several sessions. Although the styles are very different, all three have excellent illustrations, as well.

It’s notoriously difficult to depict deities or other important religious figures, but people still try! Krishna is often shown playing a flute and wearing a peacock feather. He’s also frequently shown with blue skin, which can be interpreted in various ways. Some say the color blue reminds people that Krishna has no beginning and no end, much like the sky and the oceans which are also blue.

Krishna, especially when depicted as a young boy, nearly always holds a flute, called a bansuri. When he played it, all of Nature would become mesmerized. Rivers would overflow, calves would perk up their ears, and trees would fill themselves with flowers and fruit. Krishna’s music filled the world with love, beauty, and goodness, and everyone wanted to hear it.

Paper bansuris are the perfect Krishna craft. You can find online video instructions – like this one or this one — for various paper flutes. Here’s one we made with our Upper Elementary (ages 9-11) group.

One day, Krishna’s charming bansuri melody inspired the nearby peacocks to dance with joy. Before departing, the peacocks offered Krishna their feathers, so he picked one up and tucked it in his turban. And that’s why Krishna is often shown wearing a peacock feather.

The peacock is the national bird of India. Their feathers have long been symbols of power and beauty, and the feather’s eye is said to represent divine wisdom. Given all that, paper peacock feathers and feathered crowns have also become popular crafts for Krishna Janmashtami. Again, you can find various crown templates and video tutorials online. Here’s the one we made with our Lower Elementary (ages 5-8) group. 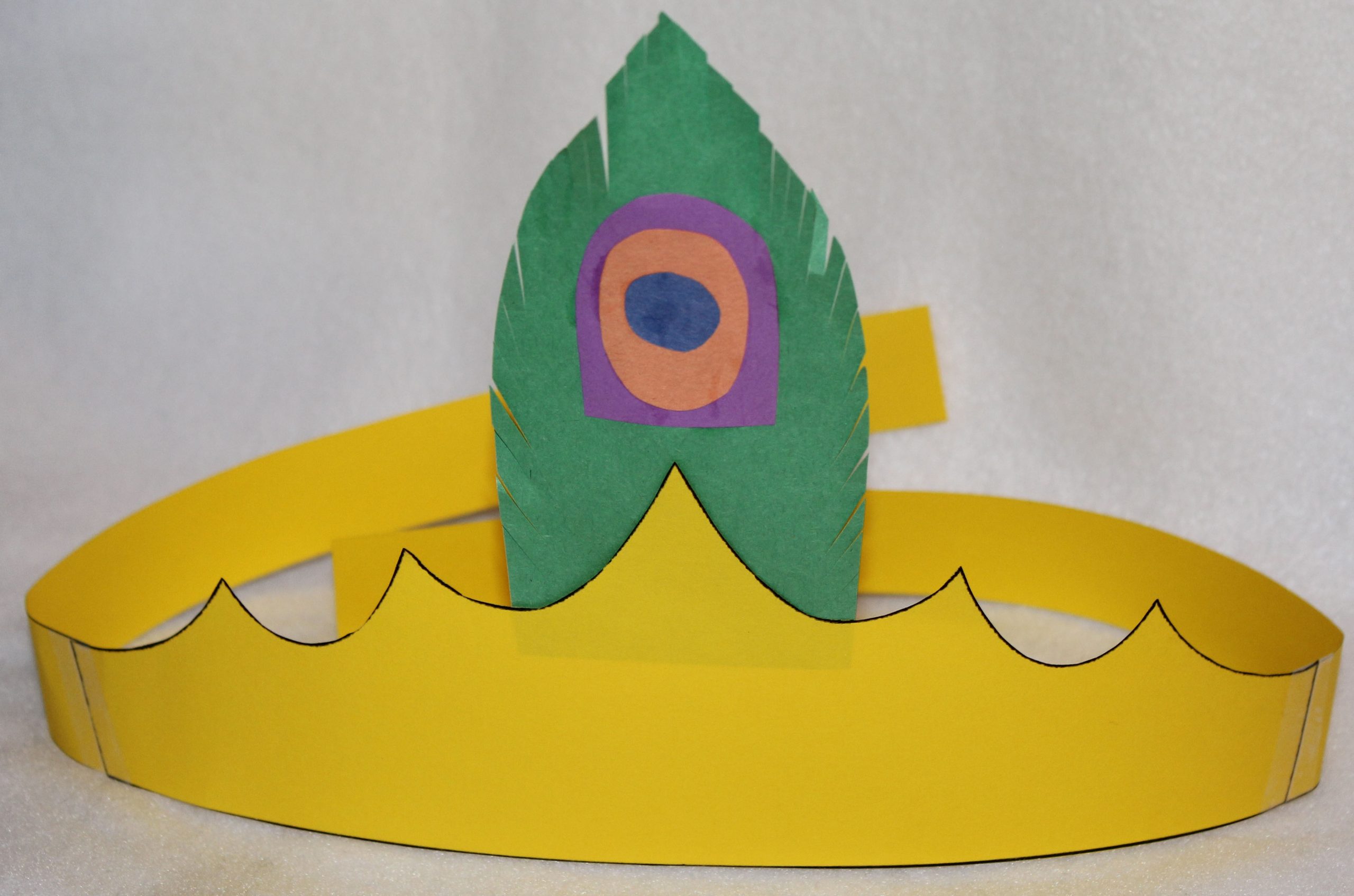 Krishna as an Adult

After defeating the evil King Kamsa, just as the prophecy had predicted, Krishna became a mighty prince. He was the chariot-driver for Arjuna, the super-human hero in the Indian epic, the Mahabarata. In fact, during a lengthy conversation with Arjuna, Krishna reveals his full divinity and teaches Arjuna how to attain spiritual liberation. This extracted conversation, known as the Bhagavad Gita, is a popular and sacred text in the Hindu tradition.

In addition to various holiday activities, many Hindus also celebrate Krishna Janmashtami by visiting a temple. If there’s a Hindu temple in your area, please consider taking your children to see it. You can simply enjoy the exterior and the grounds. Or, if you’re feeling more adventurous, remove your shoes and step inside. If you’re not sure where the nearest Hindu temple is, click here for a comprehensive list of Krishna temples around the world.

There’s nothing special you need to know when visiting a Hindu temple, so feel free to walk around. You will probably see a statue of the primary deity in the center, and it might be decorated with flower leis. You will also probably see at least one altar with offerings of food, flowers, or money sitting on it. Simply treat the area with the respect it deserves. Anyone present will be happy to answer any questions you might have, as long as you don’t interrupt them while they are chanting, praying, or engaging in other rituals.

If an in-person visit is not an option, consider taking a virtual tour online! This video, by Mint, offers a 3-minute tour of the Krishna temple in Udupi, Karnataka, India.

Being a global citizen means both learning about, and appreciating, the array of cultures found around the world. Faith-based practices — which can influence what people wear, what people eat, and what holidays they celebrate — are often important aspects of culture. Krishna Janmashtami is a fascinating holy day from the Hindu tradition. And its rich legends, playful stories, and easy craft ideas make it particularly fun to share with kids.

Do you regularly celebrate Krishna Janmashtami with your family? If so, what traditions do you have? Please share!

Celebrating Diwali as a Multicultural Family

10 Fun Facts About Diwali for Kids