In the United States, we lag behind in foreign language learning compared to many other countries. From Europe to Africa, there are many countries where there is more than one official language and the local citizens learn and use multiple languages in the home, in school, and at work. Help your children learn a foreign language with these five easy hacks for parents raising bilingual kids. 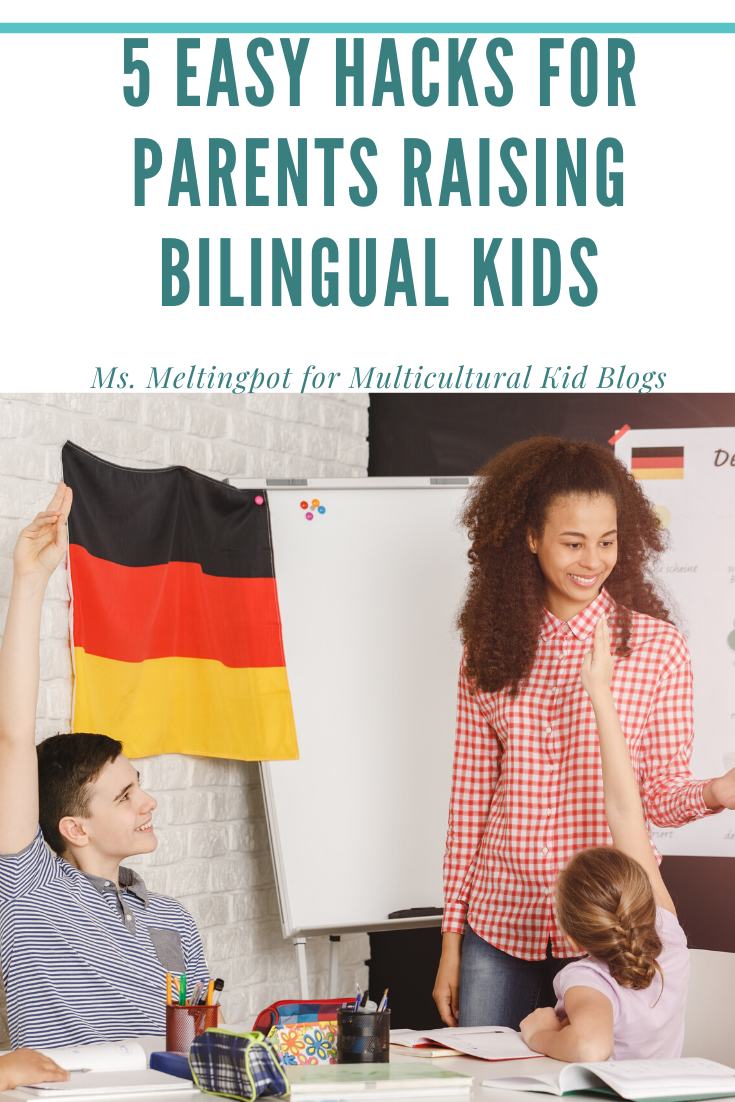 Study after study shows that, contrary to what many people used to fear, raising a child with more than one language leads to several positive outcomes, from cognitive to financial benefits. The problem is, even with the best intentions, many parents still struggle with teaching their children more than one language.

Of course, there are many reasons why plans to teach our children another language fall flat, but the one problem almost everyone struggles with is reinforcing the language outside of conversations with mom or dad. In fact, often times a child only has one parent who speaks the target language so there isn’t a lot of opportunity for the child to increase her vocabulary, hear other accents and /or just get more practice with the non-dominant language.

But just because you may not have a native speaker nearby or bilingual schools in your neighborhood, doesn’t mean there aren’t myriad ways of exposing your children to the target language you want them to learn.

Believe it or not, there are resources and activities that you’re probably using right now that can be turned into language lessons with minimal effort from you. Most of these activities are ones your kids will be thrilled to engage with because, nine times out of ten, they’re probably doing them already.

Use Netflix to Learn a Language

If you have Netflix, then you already have a treasure trove of foreign language tools at your fingertips. In addition to a wealth of foreign films on the streaming service, you can go to settings and switch the language or subtitles to your target language. Last I checked, there were more than 20 different language options, including Arabic and Korean. If your child wants to watch a favorite movie or a TV show, say, yes, but change the language settings. It’s a win-win for everyone.

Play a Video Game in a Foreign Language!

If your kid loves to play video games, don’t make him give them up. Instead, adjust the settings and let them play Minecraft in Mandarin or Fifa in Finnish. You can change the settings on many popular video games so your kid is learning even while he’s playing. Score!

Learn a Language Through Music

You can tap into the music scene of almost any country with Spotify (or another music streaming service) without ever leaving your house.

Find a playlist of the Top 20 pop songs in Sweden or Spain and let your kids hear another language set to music. Spotify plays advertisements too, so they’ll also hear commercials in the target language, which is just more vocabulary and accent practice.

Depending on your target language and where you live, this may not be so easy, but if you live in a relatively diverse city and can find a grocery store where they speak a different language, use a trip to that market as a lesson. Grocery stores are great because a child can hear another language being spoken by employees; they can practice speaking with said employees, and they can read package labels and signs throughout the store. Plus, you just got your shopping done!

It goes without saying that reading books is a great way to improve a child’s language skills. But depending on where you live and the resources available to you, finding books in the target language may be challenging.

Rather than feeling guilty for not having the time to track down new books for your child in Spanish, consider investing in a subscription service, like Booklandia where they will send you new books in Spanish every month. If there isn’t a subscription service in the language you’re looking for, consider ordering a subscription to a magazine from the country where the language is spoken. Yes, it might be costly with international shipping, but those magazines can be used for so many projects and activities in the future! Plus you are guaranteed new material on your doorstep every month, and you didn’t have to move a muscle.

At the end of the day, raising bilingual kids requires a lot of commitment, but try to find ways to incorporate lessons into activities you’re already doing instead of adding to your to-do list. I hope these five easy bilingual parenting tips give you inspiration and ideas to keep going.

What are your favorite hacks for parents raising bilingual kids?

Introducing A Second Language to Your Child

Language Learning for Parents: 8 Tips to Learn Like a Bilingual Kid

Lori L. Tharps is the author of the book Same Family, Different Colors:Confronting Colorism in America's Diverse Families (Beacon). She is the mother of three biracial, bilingual, bicultural kids and she hosts the podcast and blog, MyAmericanMeltingpot.com.