For families living in the Northern Hemisphere, May Day is a great time to celebrate longer days, warmer weather, and the increased presence of the sun. With centuries of history behind it, May Day offers numerous ways for kids and families to tap into the spirit of the holiday. Here is a brief history of May Day, along with fun May Day activities and crafts for kids! 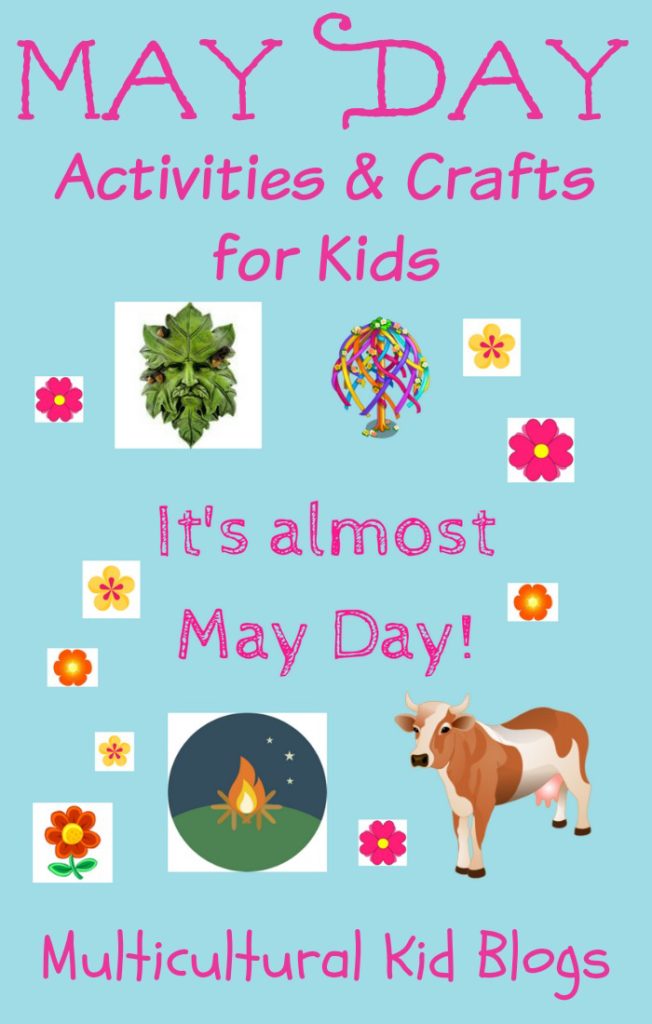 Origins of May Day

Like most holy days, May Day finds its roots in pagan, earth-based traditions associated with the seasons and the land. In those traditions, the end of April/beginning of May was a time to honor the start of summer. The flowers are now in bloom, the first greens are ready to harvest, and the baby animals – born in the preceding months – are now scampering about.

In the northern parts of Europe (now known as Ireland, Western Scotland, and Isle of Man), the Gaelic people celebrated May 1st as Beltane. Astronomically, Beltane marks the half-way point between the spring equinox (around March 21) and the summer solstice (around June 21). It also rejoices in the union of the Green Man and the May Queen. Yep, it’s about sex, but you don’t have to tell your kids that part! Try this explanation instead:

Thanks to the spring rains, Beltane/May Day marks a time when the earth is teeming with an intensity that’s ready to burst forth. The Green Man (who represents energy, vitality, and fertility), falls for the beautiful May Queen (the earth goddess whose hair is decorated with a ring of springtime flowers). It is their love that ushers in the abundance of summer.

For the Green Man craft, we used liquid glue to cover the mask with paper leaves printed on various shades of green paper. You can find our leaf templates here.

Since it is spring in my part of the world, we cover our May Queen masks with real flowers using a hot glue gun.

South of the Gaels, in the modern-day countries of Germany, France, Belgium, and Great Britain, were the Celts. We know that Celts decorated and worshipped sacred trees. And while some cultures probably honored the trees at the height of the summer (e.g., summer solstice), instead of around May 1st, those tree-celebrating traditions probably served as the precursors to the modern-day maypole. Since the first flowers are usually in bloom by Beltane, it’s easy to envision trees being decorated with the local flora.

It’s also easy to imagine how the maypole motif might easily be incorporated into other Beltane rituals – especially since some historians have suggested that the maypole, with its accompanying dance, was a way to merge the masculine (represented by the pole) and the feminine (represented in the circle dance). The goal of such magic rituals was to encourage fertility and abundance. In support of this idea, several written accounts on both sides of the Atlantic indicate that Christians were not amused by these ancient, heathen practices. The maypole idea managed to survive anyway, and nowadays, it seems fairly harmless to most people.

Constructing a full-sized, functioning maypole requires a fair amount of time and energy. Here’s a quick, inexpensive miniature maypole you can make with kids. 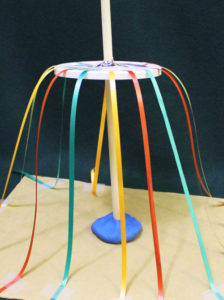 1 wooden dowel (this one was ¼“ in diameter)

small piece of clay and cardboard base (we used a recycled cereal box) are optional.

Instructions
Cut an “X” in the center of the plastic lid with the utility knife, so the wooden dowel will fit through it.

Cut the ribbon into 12” lengths and tape one end to the top of the plastic lid. If you want to straighten the curling ribbon, place it between your thumb and forefinger and pull the ribbon through.

You can call your craft complete at this point if the kids want to roll the dowel between their hands and make the maypole spin. The more ribbon you add to your maypole, the better it will look, but our kids usually get a little bored by the time we’ve taped on 8-10 ribbons.

If you want your maypole to stand up, place the small piece of clay in the center of the cardboard base and use it as a stand for the dowel.

You can also tape the other ends of ribbon to the cardboard base.

Moving south yet again, to ancient Rome, we find a version of May Day/Beltane called Floralia, in honor of the goddess, Flora. As a goddess of important things like flowers, vegetation, and fertility, she was widely revered by the ancient Romans. In fact, she was one of only 15 deities in the Roman pantheon to have an officially assigned priest (flamen) to oversee the rites and rituals associated with her cult. In modern times, that means you can always celebrate May Day with flower crafts!

There are lots of ideas out there, so here are just a few links to get you started.

For Gaels, Beltane was also the time when livestock were driven out to the summer pastures. Bonfires were lit, and rituals were performed to protect the animals and to encourage abundant growth. Many of us think of sitting around fires as a mid-winter activity, but the cool nights that often happen at this time of year are perfect for a small fire that’s just warm enough to take the chill out. Beltane also offers yet another way to celebrate May Day…cow crafts!!

Check out these links for cute cow crafts.

One of the downsides of industrialized society is that many of us are disconnected from the earth. May Day is the perfect holiday to begin renewing our relationship with nature. Notice the seedlings pushing their way through the soil and emerging as a little shoot. Stop and smell the newly-arrived spring flowers. Visit a farm so you can see (and smell!) the animals that serve as a major food-source for many of us. Feel the increasingly warm sun on your skin. And appreciate the coming of summer as our planet continues her miraculous journey through the cycle of seasons. Whether you view May Day as a spring holiday or a summer one, there’s a bit of magic and fun for everyone!