Since early October 2012, Malala has become a known name throughout the world. The attempt on her life was a shot heard around the world that continues to ring in our ears today.

“We realize the importance of our voices only when we are silenced.” — Malala Yousafzai

Malala Yousafzai was announced as the co-recipient of the 2014 Nobel Peace Prize, along with Kailash Satyarthi, for her struggle against the suppression of children and young people and for the right of all children to education. Aged 17 at the time, she became the youngest Nobel Prize laureate.

When Malala was just 11 years old, the age my son is now, she began to write a blog under a pseudonym for the BBC Urdu detailing her life under Taliban occupation, their attempts to take control of the valley, and her views on promoting education for girls in the Swat Valley. The following summer, journalist Adam B. Ellick made a New York Times documentary about her life as the Pakistani military intervened in the region.

As her efforts to speak up for children in Pakistan strengthened, Malala rose in prominence. She gave interviews in both print and television. She was nominated for the International Children’s Peace Prize by South African activist Desmond Tutu and the winner of Pakistan’s first National Youth Peace Prize. The Taliban began to take notice. 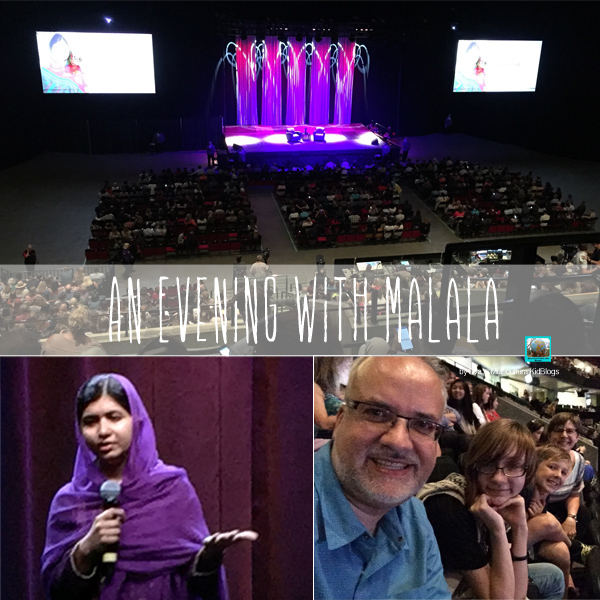 When I learned that Malala would be coming to the Theater of the Clouds at the Moda Center in Portland, Oregon to speak, I knew immediately that this was an opportunity I didn’t want my children nor I to miss. Her message is incredibly important, not just for girls, but for all people in every corner of our globe.

Malala spoke at length about her life in Pakistan before the rise of the Taliban. It was a delight to hear her speak of her love for country and family. We laughed with her and smiled widely as we identified our shared experiences and the lessons from which we learn as children. She later brought the audience of almost 4,800 to tears when she spoke of the intolerance of the regime that would attempt to silence her.

Hearing her speak of her life experience and determination to not only continue her own education but to strengthen her efforts to spread her message of education for all was inspirational. It was also humbling. My son stated in his reflective essay, “Here in the U.S. and in other developed countries, most children want a new X-Box or a new toy.  This tells me that they take their opportunities for education for granted. I think it is good to take into consideration what Malala has to say because education is really the only key to a successful life in this world.”

I fully understand that not all can access formal education for innumerable reasons. Education can come in many forms; life experience, world travel, and self-teaching. I fully believe it is the pervasive attitude driving the desire to learn that ultimately culminates in knowledge of self and acceptance of others.

“Believe in your voice, in your work and in your participation in this world.” — Malala Yousafzai

Her grace, wisdom, and ability to inspire others are far beyond her years.