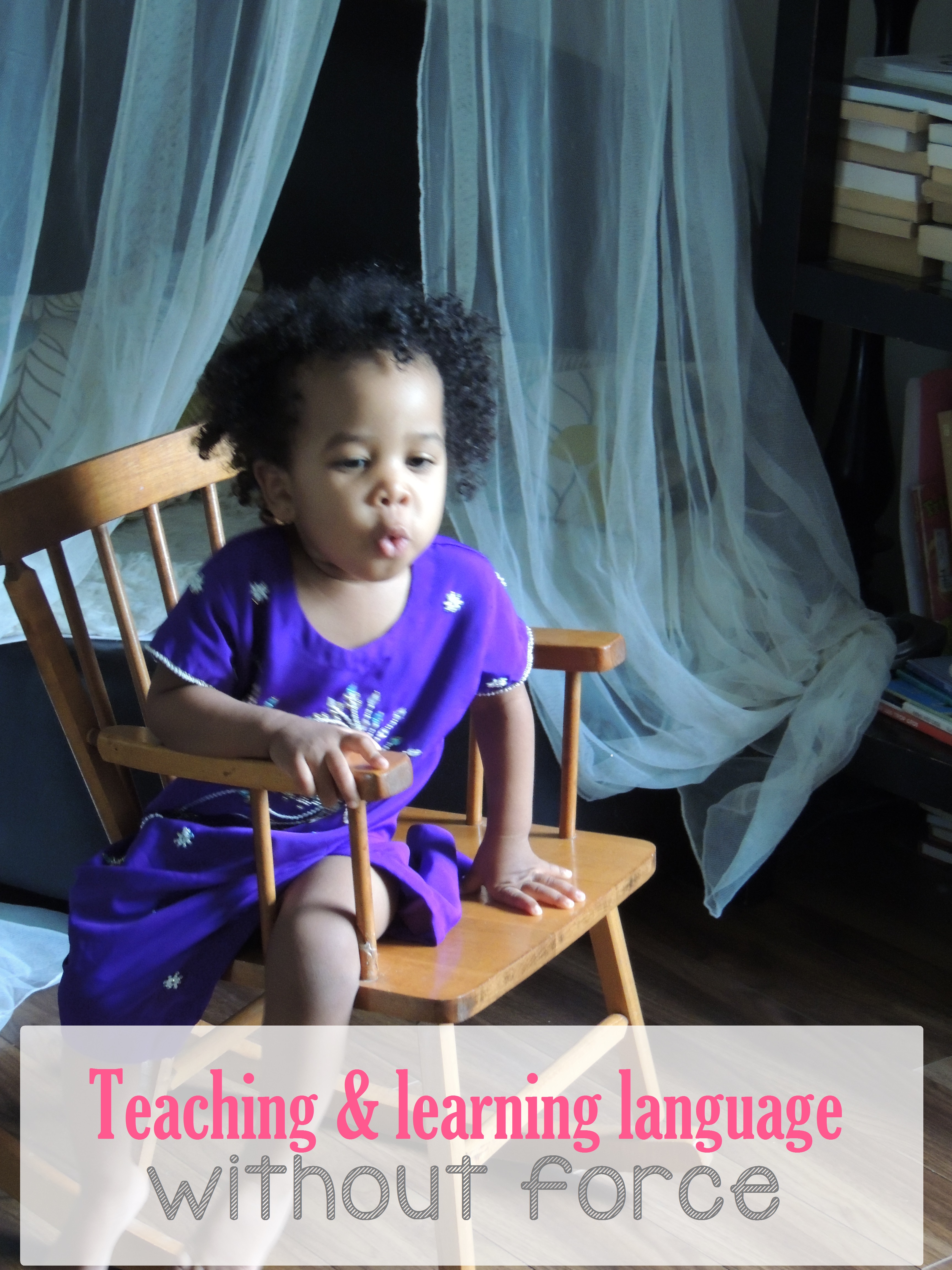 As the last of 5 children I had more or less given up on teaching language to my youngest daughter, born in 2013 (we call her Zbear). After years of attempting to pass on my husband’s native language (Arabic), and my 2nd language (French), I figured I would let the chips fall where they may.

The language struggle had been a thorn in my side for years, and I was finally coming to terms with it.  Extended family members on hubby’s side knew that the kids were learning Arabic, and I felt like a fraud, attempting to prime the kids with a few keywords that they could show off to their grandparents on their weekly Skype chats (cause who doesn’t do that?!) In the end, I was exhausted.

It got to the point where I just didn’t have the energy to do it anymore; I felt like a complete failure. In the Fall of 2014, after a failed-OPOL (one parent one language) agreement with my husband, my own struggles to learn Arabic, and hold on to the bit of French that I could speak, I was frustrated.

As a facilitator of play and homeschooling mama, I just couldn’t connect with the fact that this was one area in my life and my teaching that despite all efforts, it just wasn’t working for us. That all changed one day when Zbear and I were out on a mom and daughter nature walk.

Zbear who was 18 months at the time already had a great vocabulary English-wise. Words like avocado, guava, and tissue were as common to her as the words no, thank you, and mama. 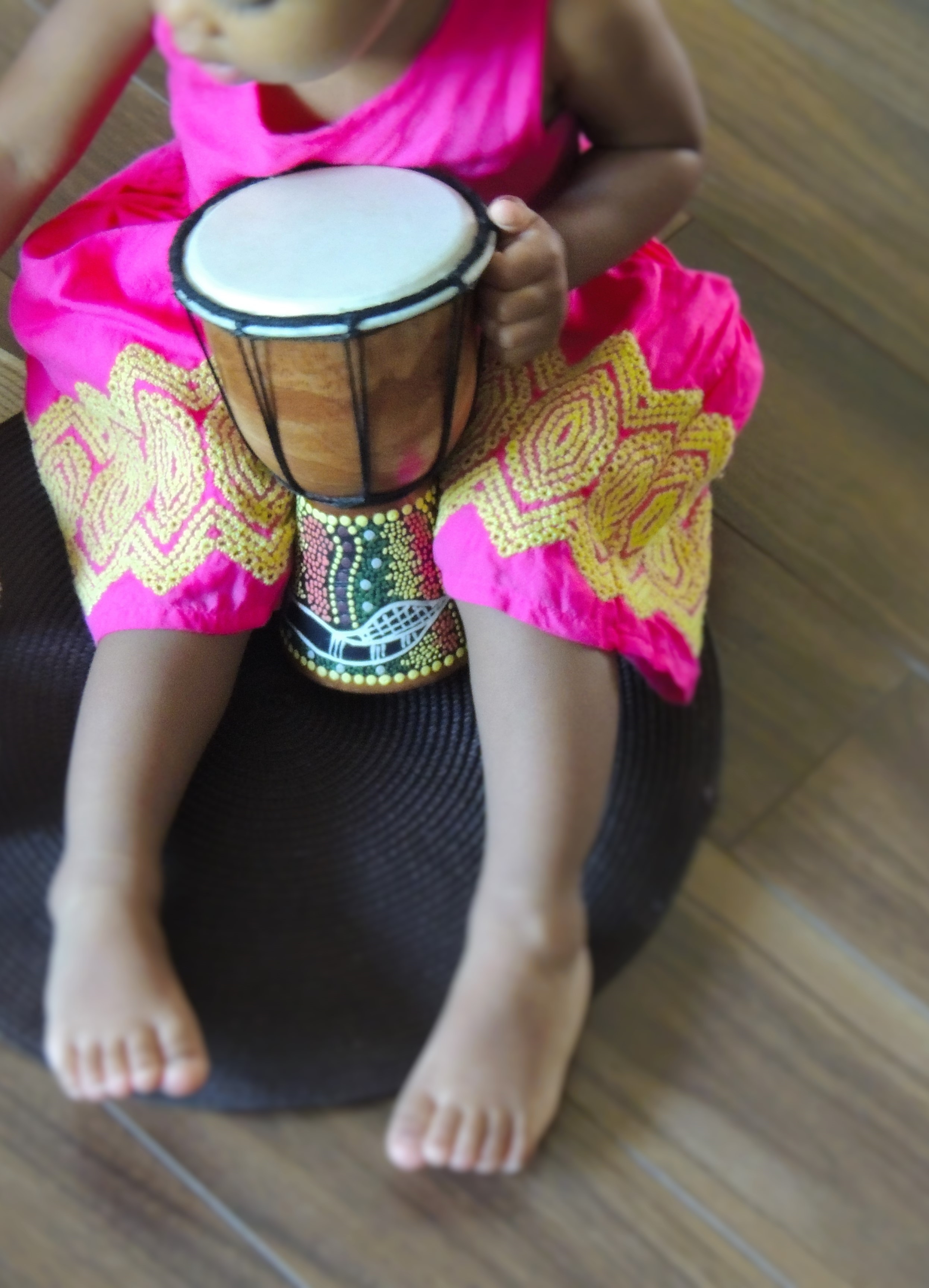 In all honesty, we were not as impressed with her command of English, as when she mimicked words in Arabic, and if she remembered them the next day, it was cause for celebration. At the same time, I was throwing in French words and phrases, but she would either ignore me or flat-out refuse to say any of these words. I gave up!

As a nature-based facilitator of play, I have always believed that kids learn best when they are outside, being one with nature. I believe that their minds are clear, and there’s nothing like fresh air to relieve stress.

My children and I, along with a group of children that I care for, spend parts of our days outside, but as one of the youngest in the group, Zbear often fades into the learning background.

On that particular day, as she rode in her wagon she was very vocal, and was speaking her own little language and humming songs.

I too enjoy nature, and tend to space out a bit when we get outside; thus, I was barely paying attention when she tried to point out something to me. I kept walking and interrupted her story-telling, to show her some of the small wonders that were before us – pretty flowers popping up here and there, and a few butterflies.

Again I heard a little voice, determined to be heard, it said, “mama…oiseau“…of course the word sounded more like “washoo”. I followed the direction she was pointing in and indeed there was a bird perched on a fence. 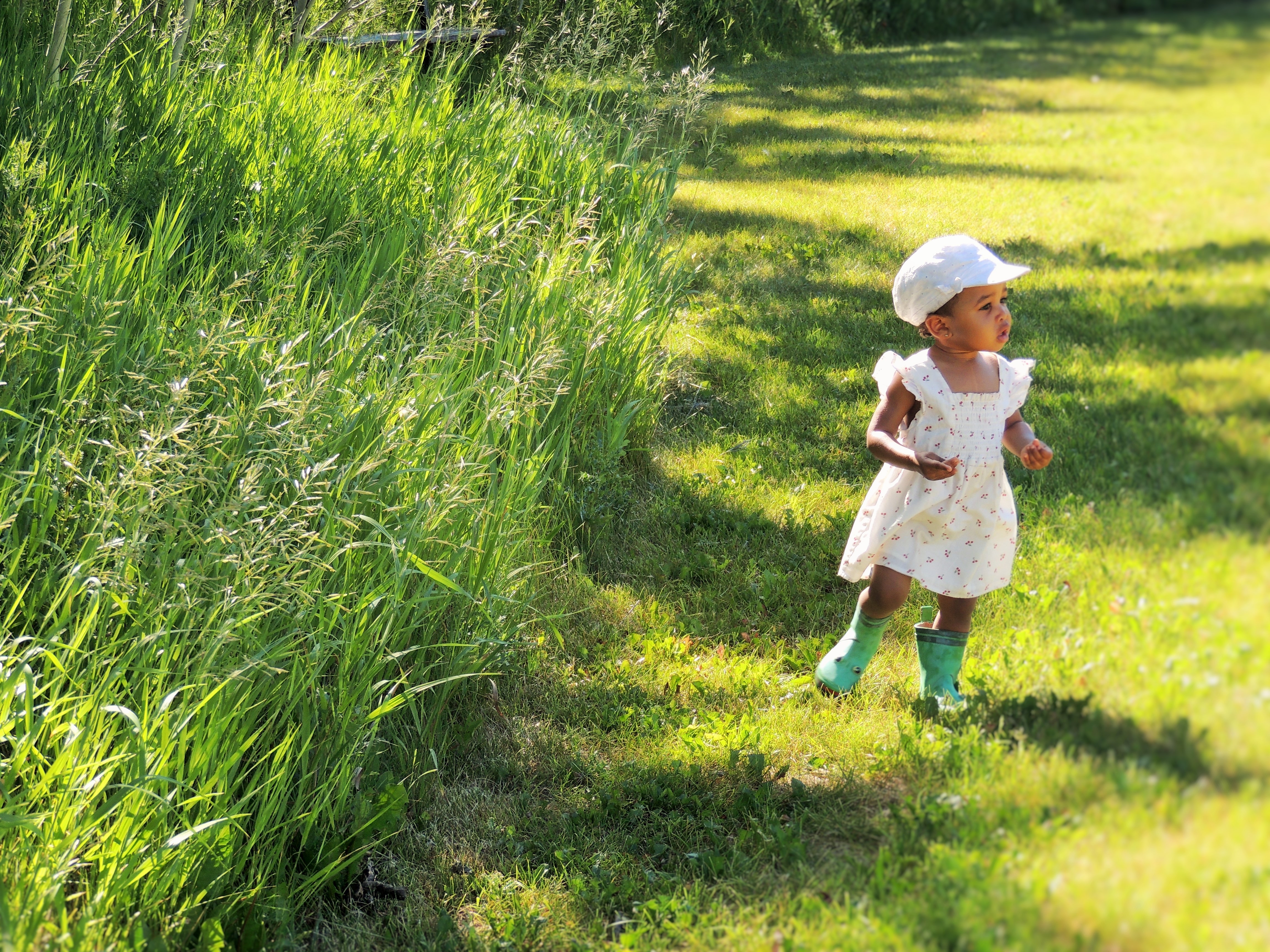 Words cannot describe how excited I was when I heard those words. I’d heard other parents bemoan about teaching (or) attempting to teach a 2nd or 3rd language to no avail. I, like them, was sure that child was just uninterested, and that it was a waste of time. In that moment I realized she had been listening, and she was interested.

Since that day, Zbear has said many more words in English, Arabic, and French…my most recent favorite was the word “bashava” (translation “baklava”) at our Eid celebration. Far from ignoring new words in English, I now try to celebrate every language milestone.

I have also learnt a few lessons as well. The first and most important is to Stop (what I am doing), Look (at what my child is showing me), and Listen.

I have noticed that aside from mimicking her brother, baba or sisters, she is a silent learner who learns best in nature. When we go outside, I try to find some time just for us. These teachable moments are unplanned, simply conversations between her and me.

I try not to be intrusive in her learning, to make the learning environment as stress-free as possible, and I NEVER parade her around others forcing her to show off her vocabulary…although she loves to show off to her big brother that she knows a new word, or two.
I have come full circle – almost. I am now trying to gain my confidence in attempting to speak more Arabic and French whenever possible.

A few weeks ago, I began thinking about my own language journey. There’s no doubt we learned our first language without much instruction; but when it comes to learning a second or third language we can sometimes feel like it is a chore or worse, a burden. My youngest daughter has taught me that languages are acquired through patience and a bit of innovation, not deliberate and complicated instruction. She has also taught me that language learning is essentially fun, when it is done naturally, without force.

I used to feel embarrassed to make mistakes when speaking with the kids, because I knew that hubby was listening – even if he wasn’t trying to. Now I don’t care as much. I am also learning from the kids. My 4 year old son has corrected me from time to time, and while he notes on occasion that I forget the same words, I’m happy to know that he is listening.

Salma is a Jamaican mommy, married to a Guy from the Other Side of the Fence AKA Mr. Yemeni. Together, they create chaos cleaning up cultural and multilingual messes as they try to bring up 3 girls and a boy. Salma is formally educated with an honours degree in Criminology and Women & Gender Studies, but runs a nature-based playschool program. She loves playful world travelling, unschooling (Waldorf inspired), learning to teach (& speak) in tongues (English, Arabic, French), and practicing her religion. Her biggest task of any day is to do it all – with grace.

Latest posts by Salma (see all)