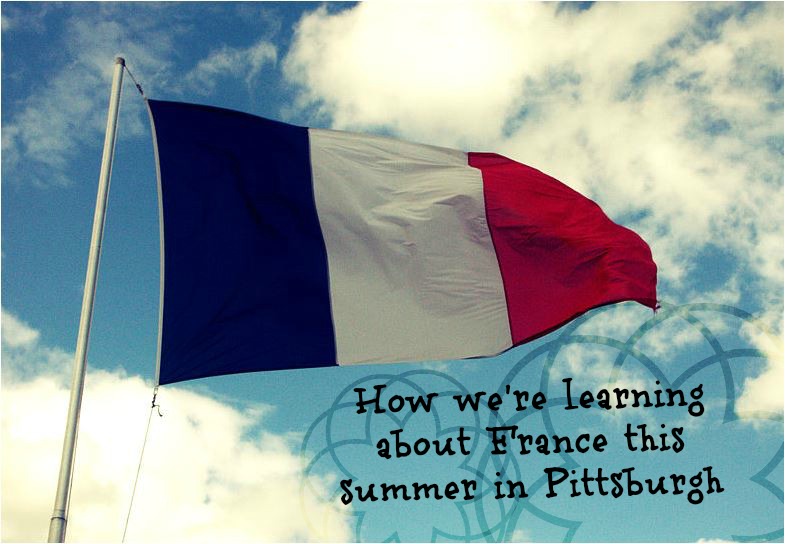 The summers here in Pittsburgh are fun – we take lots of trips to the pool, we try to go camping, we join the library book club and we do a lot of exploring around the city. But this summer, we have a new goal: the kids want to start learning another language and they decided on French.

I definitely encouraged them to embark on this goal, and I’m so happy they were excited to take it on. My children are upcoming 1st and 3rd graders, and language classes in our school district curriculum don’t start for another few years. I want them to get started now so I made a plan for getting started this summer through activities for learning about France right around our city. I took French in high school, so I’m excited to relearn with them. Here are some of the things we’ll be doing to learn the language and, beyond that, learn about French culture in Pittsburgh this summer.

This post contains affiliate links. If you click through and make a purchase, Multicultural Kid Blogs receives a small commission.

I signed my kids up for a week-long French camp. While there will be classroom-like sessions, the majority of the camp will involve learning French through activities like playing outside, swimming, cooking, canoeing, archery, crafts and sports. Even mealtimes will offer an opportunity to learn the language.

During July, we had hoped to take French lessons twice a week through a school program in our area. The lessons were divided by grade levels and, unfortunately, there were not enough children signed up for our section so we’re considering doing some private tutoring instead.

We have French bakeries and restaurants in Pittsburgh. Our plan is to visit each of the authentic bakeries which are in different neighborhoods (because can you ever have too many French pastries?): Jean-Marc Chatellier’s in Millvale, Gaby et Jules in Squirrel Hill and the original La Gourmandine in Lawrenceville. We may also have lunch one day at Paris 66 and practice reading the menus. We will also grab a savory or sweet crepe from the Pgh Crepes food stand that pops up all around town at community events. I’m also excited to cook some French recipes from the website Global Table Adventures.

We are fortunate here in Pittsburgh to have some wonderful art museums like the Carnegie Museum of Art and the Frick Art Museum. We plan to take a day or two and go visit the art museums to see work by French artists such as Claude Monet, Jean-Francois Millet, Paul Cezanne and more! Here’s a link to the Carnegie Museum of Art collection where you can sort by French artist and type of work. We’re excited to visit the museum again with just an eye for the French art.

5) Nationality Room at the University of Pittsburgh

The Nationality Rooms are a collection of classrooms that reflect the ethnic diversity of Pittsburgh. There is a French room that represents the Empire Period of 18th century France. We have visited before but we plan to go again this summer. You can click on the French room from this link and watch a short video that will give you an online tour. We’ll make sure to return to the Nationality Rooms in December for the Open House, which includes ethnic dancing, food, music and holiday decorations.

We plan to watch some French films like The Red Balloon

. We’ve watched this film before but we’ll watch it again along with some other age-appropriate films I found on these lists here and here. We’ll also check out some French cartoons from this list by Kid World Citizen.

We found several books that we’ll read this summer, including The First 100 Words in French

book by Usborne Publishing. I love the online feature that supplements this book. When you’re learning a new language, it’s extremely helpful to be able to hear the words spoken so you know you’re getting the pronunciation correct.

We also checked out a few French music CDs from the library that we’ve enjoyed listening to in the car and trying to hear French words that we know. Our favorite so far is the French Playground

These are a few of the things we’ll be doing as we learn French this summer. The kids can already count in French and say a few phrases – here’s hoping it’s just the beginning of a lifetime of learning. When we eventually visit France, we’ll be ready!

Mandy Fields Yokim is a nationally published writer and editor based in the Pittsburgh area. Her work has appeared in Parents Magazine, Blue Ridge Country Magazine, NEXTpittsburgh, Kidsburgh, TEQ Magazine, Pittsburgh Tribune-Review, Pittsburgh Post-Gazette and nearly 20 parenting publications across the United States and Canada. Her blog posts have appeared online at Pittsburgh Magazine, Kid World Citizen and Wonderaddo (http://www.wonderaddo.com/), the global education initiative she founded in 2013 to encourage kids and families to explore the world in Pittsburgh.