A few months back, our family went on a little road trip in the U.S.A. The trade-off to this otherwise great holiday was that I had to fly from Germany to Washington, D.C. by myself with my two children as my husband would already be in the U.S.A. on business. This meant saving on a flight for him and we thought it was a good opportunity not to miss. People either said I was brave or crazy when I told them about my plans. You read and hear so many horror stories about kids in planes and how you need to take the world and more in your bags that it all made me panic a little and doubt my own abilities and, dare I say, love of travel. Yet, after much thinking, I decided to go for it. 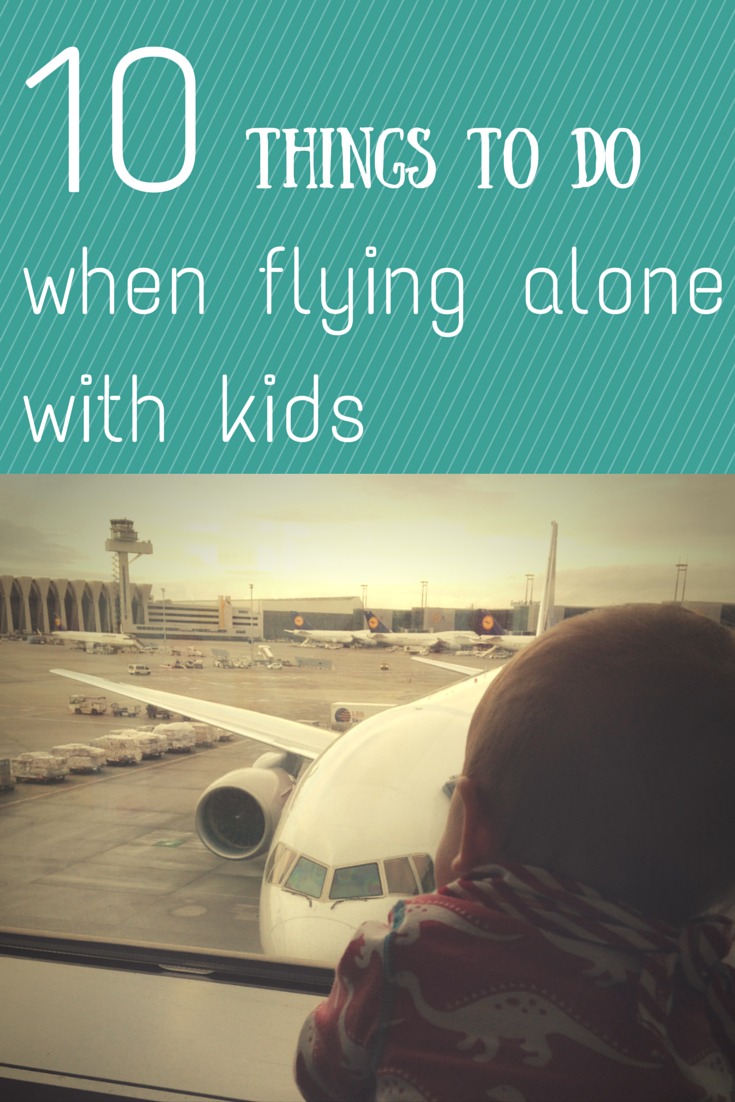 I have travelled and flown by myself with my girl when she was about 8-months old for the first time and on several other occasions since. She is a great traveller. She is used to planes and understands the whole checking in routine like having to part with her favourite toy while it is being x-rayed. But an almost-five-year-old and a very needy 9-month-old in a cross-Atlantic flight was an entirely different matter. I doubted my abilities and only made the decision at the last minute as my baby was a terrible sleeper and struggled to fall asleep without me nursing him. I envisaged the worse. I prepared for crying, screaming, no sleeping, and being stuck to my seat breastfeeding for most of the flight.
Weeks of planning, ONE packed suitcase, one tram, one train and a 9-hour flight, we arrived in a hotel room in Washington, D.C. completely exhausted, ready for bed at 5pm but all smiling and so happy to see the 4th member of our family and excited about the following 4 weeks.
Here are some of the things we/I did to prepare, hoping these can help anyone contemplating a similar trip.
1. Bring a baby carrier:
This is all you the baby equipment you need. I am not one for taking a whole load of baby equipment with me. Never. I took no pushchair, stroller or pram. If you need a stroller while there, hire one, get someone to lend you one, buy a really cheap one and get it delivered to your hotel. But we didn’t get one. We found a semi-structured carrier much easier in the airport and for public transport. Sightseeing with baby on your back is fine (no need to carry prams up and down stairs in museums) and we never really had any need for it. In Disney World, we rented a stroller for a day.
2. Buy a baby car seat (if you need one):
We bought one for baby E for the couple of weeks we had a car (much cheaper than the car rental quotes) and donated it in the end. Our 5-year-old has an inflatable booster we take whenever we travel.
3. Do not take more than one large suitcase:
I packed one very large suitcase that rolled easily, one backpack with everything we would need on-board and baby E in a carrier. That is it. If you travel alone. You have to cut down. Seriously, I am not one for un-necessary clothing and accessories. I didn’t pack my toilet paper (like some friends of mine did).
4. Order kids’ menus on the plane:
I stocked up on the kids’ favourite finger foods (you can never have too much). And we ordered a special kids’ meal for the oldest on the plane. That was really worth it. It was free (with our airline: Lufthansa), we just needed to request it while booking. The food for her arrived first (a huge plus in my books) and tasted good.
5. Pick your flight time carefully:
I picked a daytime flight. As baby E was not a great sleeper, I thought it would be easier for me to entertain them both during daytime rather then crave sleep during a night time flight. So while in the air, we went about our normal daily routines as far as sleep and eating were concerned. It made it easier for me there and then. Jet-lag from East to West is easier to manage than in the other direction, so it only took a couple of nights to then get used to the time difference.
6. Run around the airport:
I let them run around, climb, play, scream, whatever. Who cares, if it annoyed someone, better in the terminal than in a crowded plane. Some airports even have small play areas. If you get there early enough, find one.
7. Brief your kids about the immigration process:
Just a note of warning about leaving a country with two kids. Of course, I had all of the necessary paperwork but the immigration officer in Germany, set out to ask my girl where she was going and showed her my passport with my photo and asked her who I was. My little introvert was in no mood to answer a stranger with a uniform but she smiled at the passport photo so the officer took this as a sign, I think. I wish I had prepared her for immigration questions, that is all.
8. Pick your seats:
I had booked two seats with a cot. In theory, the cot is free but to reserve the seats next to the cot, I had to pay extra (so not really free…). We were in a row of 3 seats. At the beginning of the flight, a lady came to sit next to us. I was worried about having to annoy her all the time with kicking legs, getting up for the toilets, etc. But a flight attendant moved her to another spare seat an hour into the flight to give us more space! Thank you!
9. Don’t stress about changing baby:
Even though, you are not supposed to, I changed nappies on one occasion in the cot. I knew there was nothing smelly in there and I could not leave the 5-year-old alone yet again. Other families around us were doing it. The changing tables in the toilets are so un-practical (when they have one)! You have to dispose of the nappies yourself though in the toilets but the 5-year-old needed plenty of trips to the bathroom, so that was not a problem.

Warning traveling mums: @united expects you to change your baby on your lap in the toilets of a moving plane!!  #disasterwaitingtohappen

10. You don’t need hundreds of toys: There is in-flight entertainment, use it! I had no choice but to let the oldest watch some crappy films and cartoons. Entertaining the little one was enough. I had packed a couple of books and a little travel journal I unveiled as a surprise after take-off. But for the most part she watched TV or played on the floor with a couple of little figurines and a card game she had brought. I had brought one rattle for baby E and that is it because at 9-month-old, you play with anything and everything: the sheets of the cot, the magazines, the food tray, the sick bag, etc.

When we got to immigration on the other side of the Atlantic, my girl had had enough and I had to scare her a little to explain you couldn’t joke with the immigration officers as she was starting to be over-tired and wanting to breathe some fresh air. Both fell asleep in the taxi ride to the hotel.

All in all, I have to say, flying alone with two kids, was fine. I would do it again. I expected the worse and it was not. Sure, it was tiring and not the most pleasant part of the holiday, but we survived and I was actually quite proud of myself and of my two little cuties for being such great little travellers.
N.B. And in case, you are wondering, the baby boy slept for 45 minutes out of 9 hours in the air. I managed to eat and go to the toilet during that time!