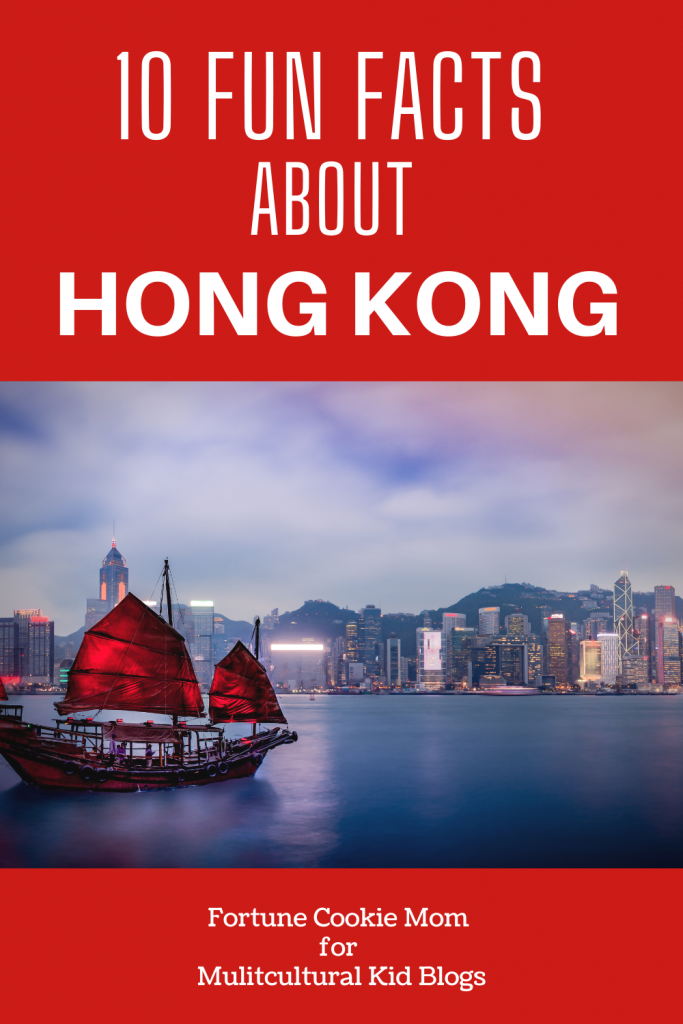 Did you know Hong Kong has the world’s longest covered escalator? Or that it has the greatest number of skyscrapers in the world? Read on to learn more about these and other fascinating facts about Hong Kong!

Hong Kong “香港” means Fragrant Harbor in Cantonese. It consists of Hong Kong Island, Kowloon, the New Territories, and other smaller islands spread over 1,092 square km. It is located in Southeast Asia along the coastline of the Pacific Ocean.

In 1842, Hong Kong was taken over by the British after the defeat of the Opium War in China. Since then, Hong Kong has transformed into one of the most vibrant and beautiful cities in the world. On July 1st, 1997, Hong Kong became a Special Administrative Region of China, Hong Kong SAR.

I was born and raised in Hong Kong. After getting married, my husband and I lived in the US, but we moved back to Hong Kong and I started homeschooling my four children. We enjoyed the local food, city life, and especially all the Chinese festivals and cultural events in Hong Kong. We were even interviewed by the local Hong Kong news channel to learn about our homeschooling day since it’s not common here.

Here are ten fun facts about my beloved city, Hong Kong. I hope you enjoy learning about this amazing city.

1. Hong Kong is counted amongst the most densely populated areas of the world.

Hong Kong consists of Hong Kong Island, Kowloon, the New Territories, and other smaller islands. Some of them, like Lantau, Cheung Chau, and Peng Chu, you can get to by ferry while others are uninhabited and unreachable. Because transportation is inconvenient, a lot of islands remain mostly rural and underdeveloped. However, people are attracted to rural life and chose to settle on these islands as well.

3. Cantonese and English are the official languages in Hong Kong.

Cantonese is one of the most prominently spoken Chinese dialects. It is spoken throughout southern China. Across Hong Kong, Cantonese is the most commonly spoken language, with 96% of the population speaking it. Mandarin comes next at 48% and English at 46%. This makes the majority of Hong Kong’s population bilingual.

Because Hong Kong is a real mix of ethnicities and nationalities, you can hear all kinds of languages spoken on the streets. There are many workers from the Philippines and Indonesia, the Middle East, and other areas of the world.

4. Dim sum originated here in southern China and it means “touch the heart.” It is an essential part of the local Hong Kong culture.

Of all the Chinese regions, the Guangdong (or Canton) Province cuisine is the most varied. The dim sum tradition started thousands of years ago to serve and offer a place for the travelers to continue their journey to the Silk Road in China. They offered bite-sized snacks which became known as dim sum or yum cha.

In Hong Kong, we will say “let’s go to eat dim sum” or “let’s go yum cha.” Both phrases mean the same thing but are just different ways to say it.

Dim sum is a Chinese meal of small plates enjoyed with Chinese tea with friends and family. Most of the dishes are steamed. There are also noddles, fried and baked items, and sweets.

Here are some of the most popular dim sum:

In Hong Kong, the traditional Chinese restaurants open incredibly early and close in the early afternoon to serve dim sum in high-stacked steamer baskets. But now, we can enjoy it any time of the day or night.

5. Hong Kong is the city with the greatest number of skyscrapers in the world.

Hong Kong Island has the world’s longest covered escalator which covers over 800 meters (2624 feet) in distance and elevates 135 meters (442 feet) through the streets of a steep hillside. It provides a better commute by linking nearby hilly areas with the Central District.

With 14 entrances and exits, more than 85,000 people use this covered escalator daily. It takes about 20-25 minutes to ride the complete escalator system one-way.

7. A famous Hong Kong landmark, the bronze Big Buddha, is one of the world’s largest seated Buddhas.

The majestic bronze Big Buddha is located in the Po Lin Monastery. It is a sitting 34 meters (111 foot) high statue. The Buddha’s eyes, lips, and hands have symbols delivering blessings to the Chinese people.  You have to climb 268 steps to get up to the top to take a closer look and see the sea views.

8. Hong Kong is among the richest cities in the world.

It is among the world’s most significant financial centers and the Hong Kong Dollar is the world’s 13th most-traded currency. In addition, Hong Kong has more multimillionaires than New York, according to the World Ultra Wealth Report from Wealth-X in 2018.

Even though Hong Kong is the city with the greatest number of skyscrapers in the world, three-quarters of it is countryside. Its landscape includes sandy beaches, rocky foreshores, woodlands, mountain ranges, and grassland.

There are a total of 24 country parks that have been designed for nature conservation and outdoor education.

10. Hong Kong has won the title of “The Best Business City in the World” for more than four years by Business Traveler Asia Pacific Magazine.

Hong Kong is the perfect location for companies that want to do business in Mainland China. Why? Because it is also the entrance to Mainland China, has a low and simple tax policy, is a free trade port, is an effective free-market, has an independent legal system, and is an English-speaking city in Asia with one of the world’s best healthcare systems.

Want to learn how I homeschool in Hong Kong and teach my four children both Mandarin and Cantonese at home?  If you are considering starting Chinese at home, feel free to check out all my free Chinese resources on my website, Fortune Cookie Mom.

Around China in 12 Days With Children

Po Tim King is a homeschooling mother with four children. She is a former Cantonese and Mandarin teacher, and a private piano teacher, who graduated in Linguistic. Since she is raising multilingual kids, she started creating her own Chinese homeschooling materials and shared them through her blog --- Fortune Cookie Mom.