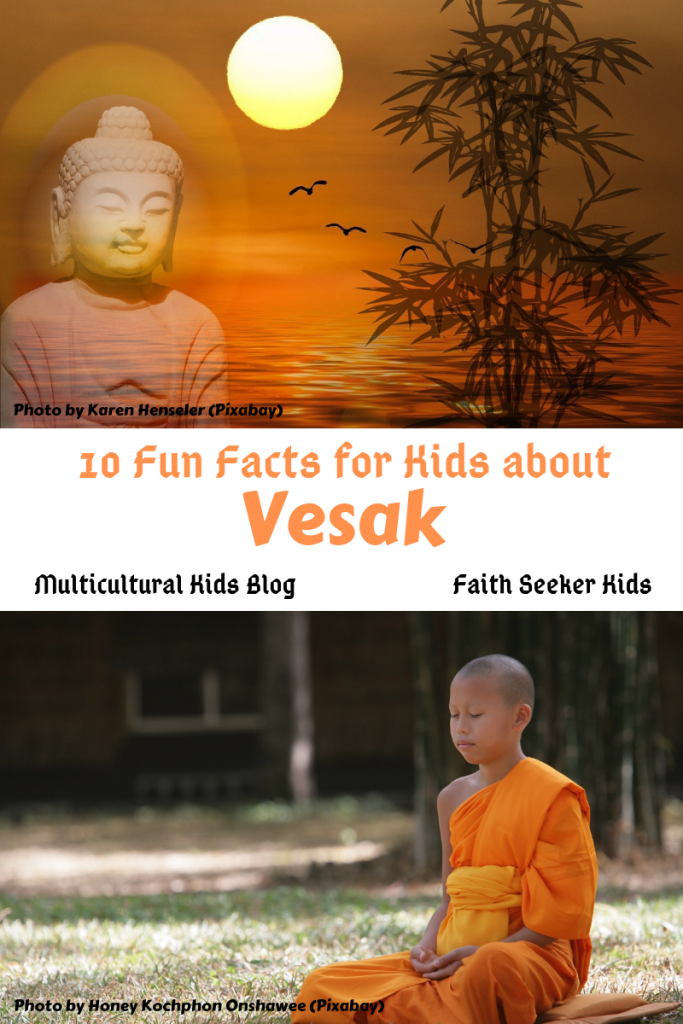 Vesak is probably the most important holiday in the Buddhist tradition – celebrated around the world by both branches of Buddhism (Theravada and Mahayana). Many faith traditions pride themselves on specific rituals practiced by all followers on roughly the same day. In contrast, Vesak – like most Buddhist holidays – is highly influenced by culture. Very few things hold “true” for all Buddhists everywhere which means there are lots of ways to enjoy it!

Fun Facts for Kids about Vesak

The short answer is that Vesak is celebrated on the full moon of the lunar month, Vesakha, which usually matches up to the month of May in the Gregorian calendar. However, the exact date in any given country depends on which calendar is being used (Chinese, Indian, etc.), as well as local full moon observances. When there are two full moons in the month, some countries celebrate on the 1st full moon while others celebrate on the 2nd one. In Taiwan, the second Sunday in May (Mother’s Day) is designated for Vesak. If it’s a leap year, Vesak is often in June. You get the idea. For 2019, common dates are May 17-19.

Typical Vesak traditions include: visiting a Buddhist temple; making offerings of flowers, money, and incense; reading/learning about the Buddha’s life; watching/participating in parades; listening to Buddhist teachings by monks and lamas; engaging in deep meditation; making charitable contributions; chanting mantras; dancing; attending theatrical performances or puppet shows; and rededicating oneself to the Buddhist way of life as outlined in the Four Noble Truths and the Eightfold Path.

A widespread custom involves hanging brightly colored store-bought or homemade lanterns. Traditionally, people lit the lanterns with candles. But nowadays, tea lights or other artificial means are deemed safer since lanterns are usually made of paper. They are hung pretty much anywhere and everywhere – around town, in the temple, throughout one’s home, etc. In some places, they are released into the sky or sent floating along a nearby river. As you might imagine, these lights/lanterns carry deep symbolism – of enlightenment, of the full moon, and of the illumination offered by the Buddha’s teachings.

A few other Vesak rituals stand out for being particularly unique. One of them is bathing a statue of the baby Buddha. Scented water, tea, and milk can all be used. Like any long-time, widespread ritual, it holds multiple meanings for those participating. It might be an expression of gratitude and the desire for good fortune. It might serve as a recommitment to the Buddhist path that leads to insight and enlightenment. Or, it might put forth a prayer that all beings may be free from suffering.

#5…It’s not just a birthday party

Vesak almost always incorporates a celebration of the Buddha’s birth, which happened around 500 or 600 B.C.E. However, many Buddhists also honor the Buddha’s enlightenment and the Buddha’s death. According to tradition, those things happened on the same full moon day, but 35 and 80 years later, respectively.

#6…But the birth story is amazing!

The Buddha’s birth story is a great example of the incredible and miraculous birth tales found in the world’s faith traditions. According to legend, the Buddha’s mother, traveling to her parents’ home for the birth, stopped at a garden called Lumbini Park, which was near the kingdom of Nepal. While resting under a tree, her son, Prince Siddhartha Gautama, was born. The baby prince then stood up and took seven steps forward. At each step, a lotus flower appeared on the ground. At the end of his remarkable walk, the baby Buddha declared this life was his last. 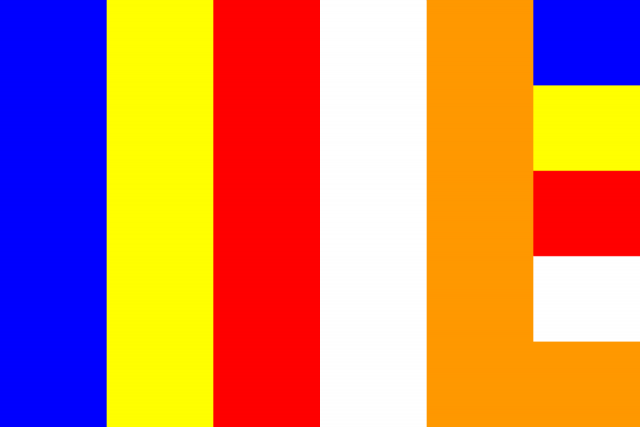 It’s common, in numerous countries, to see Buddhist flags flying during Vesak celebrations.  Six vertical bands representing the 6 auras emanating from the Buddha after his enlightenment make up the flag. Blue, yellow, red, white, and orange are the colors of the first 5 bands. The sixth band is a combination of all the other colors to represent the Pure Essence/Truth of the Buddha’s Teachings. But try finding that in your crayon box! Smaller bands of the 5 constituent colors, therefore, depict the 6th aura.

#8…It’s not just for Buddhists

Even though Vesak is all about the Buddha, some followers of Sanatana Dharma (aka Hindus) also celebrate the holy day. That’s partly because Gautama Buddha was born into a Hindu family and partly because some Hindus consider the Buddha to be an avatar (earthly manifestation) of the Hindu god, Vishnu.

The Bun Bang Fai festival – popular in Laos and Thailand – is occasionally associated with Vesak because it’s sometimes held in mid-May. It’s actually an ancient, pagan festival that honors the Sky God and celebrates fertility and the rainy season. Typical festivals include parades with elaborate floats, dance performances, and traditional foods. But the highlight of Bun Bang Fai is the rocket launch competition! If you think these are small bottle rockets, check out this video.

Vesak is a common name for the holiday, but given all the other variability associated with it, you might expect the name to vary, as well. And you would be correct! The Sanskrit word for “birthday” is “jayanti.” So you’ll sometimes hear Vesak called Buddha Jayanti, especially where the focus is on the Buddha’s birth. “Purnima” is the Sanskrit word for “full moon day,” so Buddha Purnima is another name for Vesak. And, just in case it seems odd to name a holiday after a month, Ramadan, the month-long fasting holiday in the Islamic tradition, is also named after a lunar month.

For further understanding you might enjoy the followed links:

Video: What is Wesak? (according to kids)

10 Fun Facts About The Festival Of Holi

Ramadan In Our Home