Monaco is a tiny country nestled by the Mediterranean Sea, surrounded by the French Riviera and only 8 km from the border with Liguria in Italy.  It might be minuscule – you can see pretty much the whole country in the photo below – but it has a big reputation. Let’s take a look at 10 fun facts about Monaco.

Monaco is the 2nd smallest country in the world, a “microstate” (or city-state) of only 2 sq km.  Owing to its size, it is also the most densely populated country in the world.  In order to house its residents, it has expanded into the sea several times over the years.  The largest of these reclaimed land areas is the Fontvieille neighbourhood (photo below) completely built on landfill in the 1970s.  There is currently another huge offshore urban extension being built.  This will expand the country by six hectares. You can see a map of how the country has grown here. 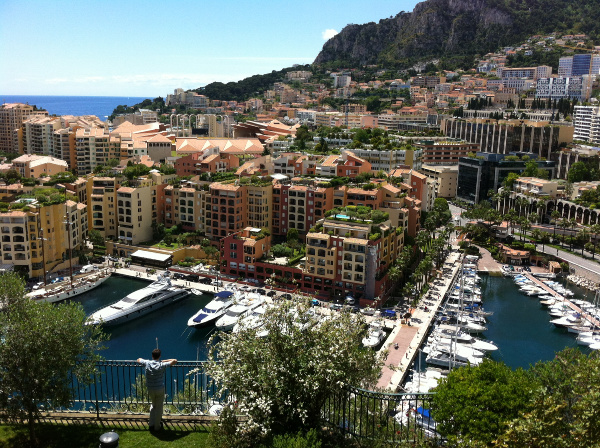 Monaco is a Principality, ruled by a Prince. It is one of the world’s oldest monarchies dating from 1297 when the Grimaldi family from Genoa took over the Principality. They have reigned almost continually since this date. The current Prince is Prince Albert II, whose mother was the famous American film star, Grace Kelly.  He is a great environmentalist/explorer and is the only Head of State to have been to both the North and South Pole.  Albert is also a former Olympian having competed in 5 Winter Olympic Games in the Monaco bobsleigh team.  His wife, Charlene, is a former Olympian too (swimmer) from Zimbabwe and South Africa. This multilingual and multicultural family live in the Royal Palace on the “rock.”

Monaco’s official language is French. However, the microstate has also its own language, Monégasque which is taught in schools and used in formal announcements and street signs. You can see an example of this on a flag celebrating the birth of the royal twins in December 2014 below.  Monégasque is a dialect of Ligurian, similar to Italian.  Other languages used in the city-state are Italian, English, and Occitan (though the last one is extremely rare).

The population of Monaco is c.38,700 (2017). This is made up of c.8,500 Monégasque and approximately 30,200 from 139 other nationalities.  However, this number more than doubles daily when over 50,000 people pour into the country from France and Italy to work (my husband included! Photo of the sleekly designed train station and some of those commuters below).  Added to this are the 1.5 million annual visitors.  However, despite it being the world’s most densely populated country I never find it overwhelmingly crowded. 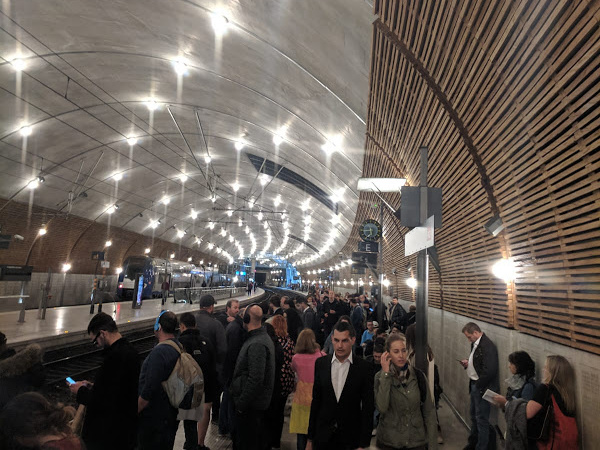 The Monaco flag is two equal stripes of red and white, with the red on top. It is almost indistinguishable from the Indonesian flag which also has a red band over white but is slightly longer.  Try not to confuse either of these with the Polish flag which could be seen as an upside- down Monaco flag (white on the top, red on the bottom)!  So when presented in banner form as in the photo below, it’s anyone’s guess as to which one is on show! 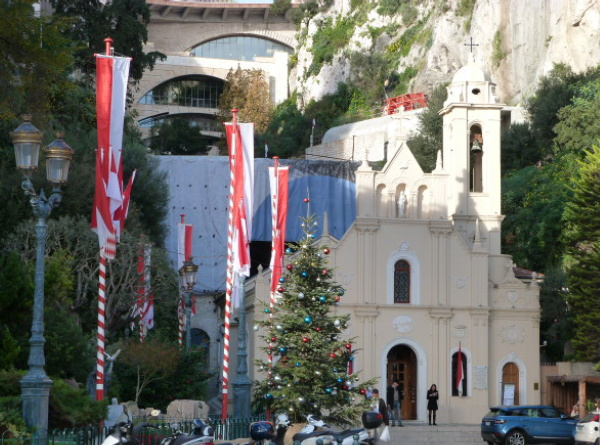 Monaco is most well-known for glamour and extraordinary wealth: nearly 35 in every 100 residents is a millionaire. It has the world’s highest GDP and residents (except for the French) pay no income tax.  It uses the Euro as its currency despite not being part of the EU. 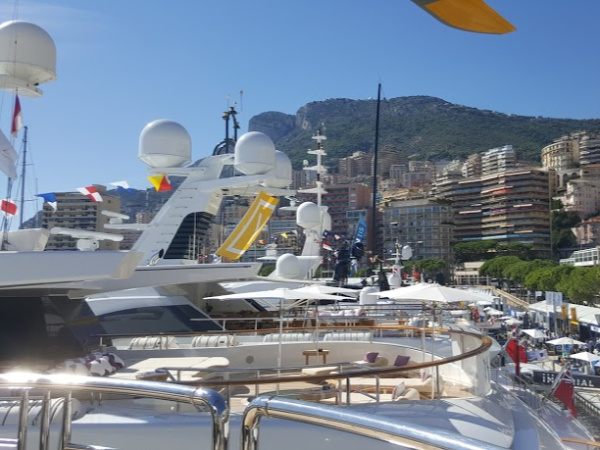 Many people get confused between the names Monaco and Monte-Carlo. So what is the difference? Simply, Monaco is the name of the whole country and Monte-Carlo is one of the four neighbourhoods that make up the city-state.  It is probably the most famous one because it’s where the legendary Casino de Monte-Carlo is located. (Surprisingly Monaco citizens are not allowed to gamble in the beautiful belle-époque casino; photo below.) Monte-Carlo is also NOT the capital as is often mistakenly thought.  The “capital” – if one can use such a term for a city-state – is Monaco-Ville or le Rocher (the “rock”) where the Royal Palace and colourful old town are located.

Having mentioned the casino, probably the other most famous thing about Monaco is its Grand Prix. You don’t have to be into cars to have heard of the world’s most glamorous Formula 1 race.  It takes place around the winding city streets in this tiny, crowded, and hilly city.  Quite an extraordinary race-track. But it is not the only car race in the country. Every other year Monaco hosts a Historic Grand Prix with vintage racing cars and a Formula E, the Monaco E-Prix with electric cars (a quieter event than the regular F1, though surprisingly still pretty hard on the ears.  Take a look at the video below, with sound on!) Monaco also holds the annual Monte-Carlo Rally (part of the WRC Championships) and a historic rally every second year.

Monaco may be best known for its glitz and glamour but ordinary people live and work in the country. Entertainment isn’t all about money and fast cars. One of my favourite things is that every winter for about 3 months, from early December to early March, the large outdoor municipal swimming pool on the harbour becomes an ice-skating rink. Actually, the fact that there is an Olympic-sized public pool on possibly the world’s most expensive harbour in itself is pretty cool.  Both swimming and skating in this iconic location are very reasonably priced. 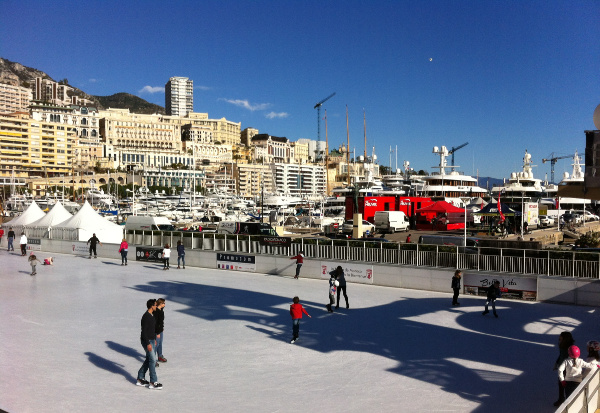 Finally a word about food. The national dish in Monaco is called Barbagiuan, which translates as “Uncle John” in Monégasque.  Barbagiuan is a savoury pastry filled with Swiss chard and ricotta, though each family might have its own slight variation in ingredients.  It is usually served as a snack or starter and is most commonly eaten on Monaco’s national day, 19 November.  It can be found in markets, as seen in the photo below taken at the Christmas market. 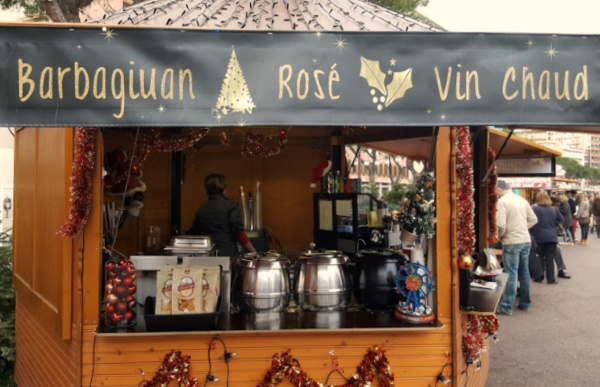 I hope you’ve enjoyed reading these 10 fun facts about Monaco, a most unusual microstate.  If you’d like to see more of the country you might like this walking tour I did in Monaco for Pink Ribbon. 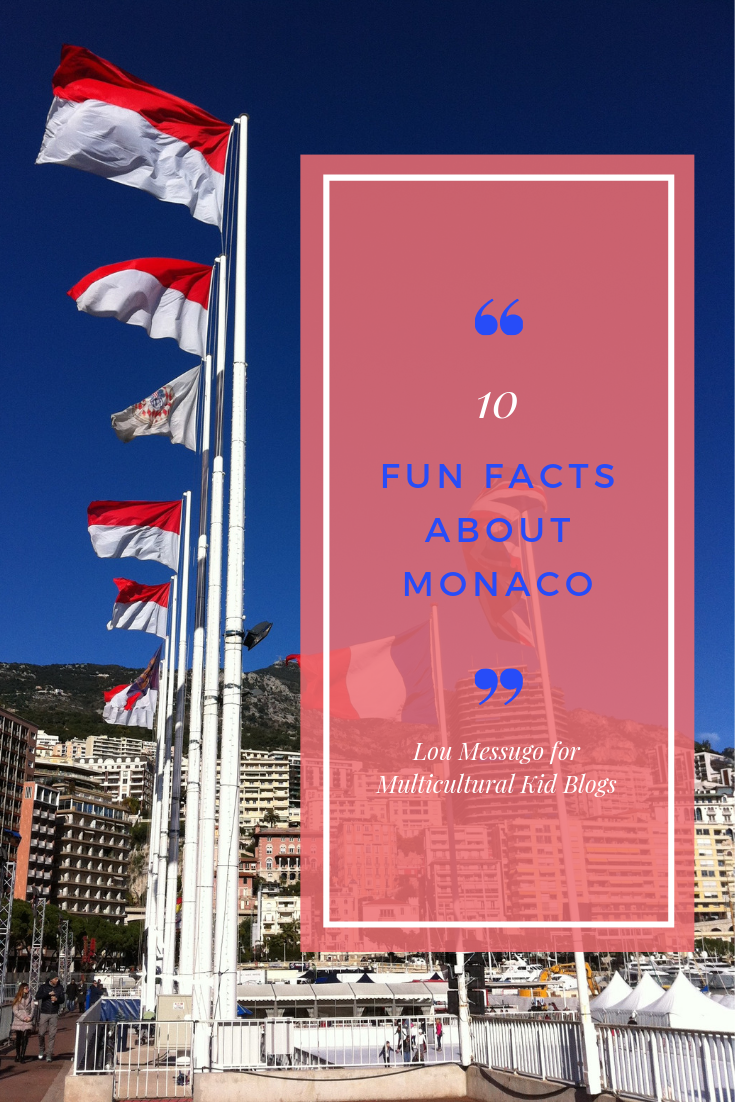 Fun Facts About Poland for Kids

10 Fun Facts About Spain For Kids

Adult TCK expat since birth, putting down (shallow) roots in the South of France. Blogger, Traveller, Francophile, Mum to 2 bilingual, multicultural boys. Connect with me on my blog where I write about all of the above, also on FB, Twitter, Pinterest and Instagram