When people think about the Dominican Republic they immediately picture endless white sanded beaches under a perpetual sun, and they are right! There is no doubt the Dominican Republic has many of the most amazing beaches in the world. More than 750 miles of coastline beaches and about five million tourists each year are a testament to that.

However, there are many other fun facts about the Dominican Republic that you might not know yet and will definitely impress you and get you wanting to visit. 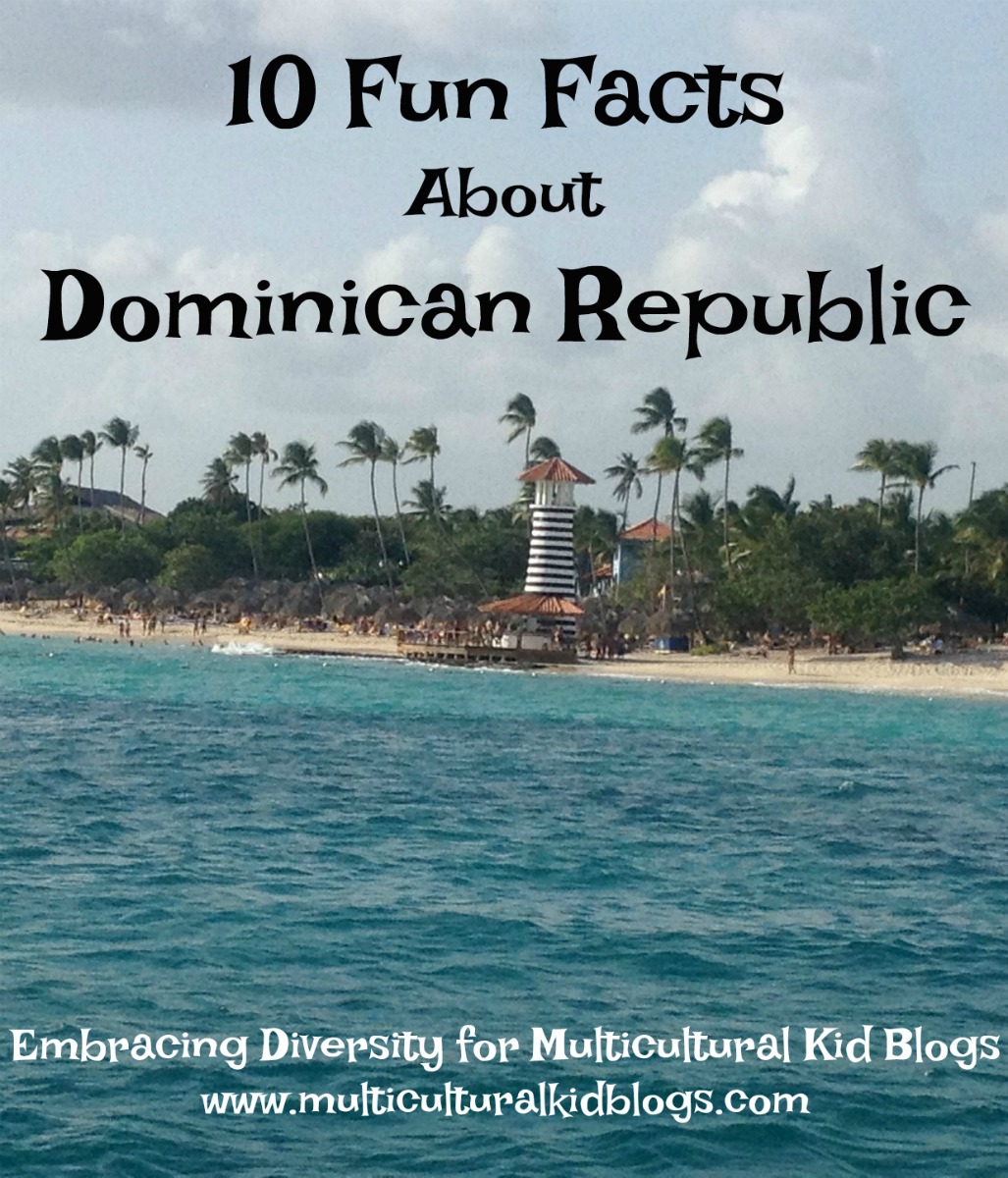 As a tourist destination, the Dominican Republic also offers world class resorts and golf courses. It has been recently distinguished as the Capital of the Gastronomic Culture of the Caribbean, highlighting the exotic and delicious Caribbean flavors you can enjoy.

Visitors also have plenty of opportunities to go scuba diving and enjoy beautiful coral reefs, as well as hiking, biking, horseback riding, and many more experiences to delight your senses.

Not for nothing Quisqueya, the name given to it by the Taino Amerindians has been called a miniature continent, due to the diversity and bountiful of natural resources it contains, topped with the friendly and joyful attitude of its people.

If you are already falling in love, you’ll be delighted to discover these 10 fun facts about the beautiful and the unique Dominican Republic!

1. Did you know that the island of Hispaniola was the first permanent European settlement in the Americas? In 1492, Christopher Columbus landed on the island during his first voyage across the Atlantic in search of a new route to India for the trade of spices. Aboard his flagship, the Santa Maria, Columbus reached the north coast of the island.

3. The Dominican flag has three colors: red, white and blue. Along with the national anthem and the coat of arms, the flag is one of Dominican Republic’s national symbols. Each of the colors of the flag has a meaning. The white of the cross in the center represents salvation, the red rectangles represent the blood of the heroes who fought for the independence, and the blue rectangles stand for liberty.

Founding father Juan Pablo Duarte designed the flag. It’s the only in the world to have the image of the holy bible in it. The bible is open to the Gospel of John chapter 8, verse 32, which reads: “And the truth shall make you free”.

4. Defy gravity in Barahona! In the southwestern part of the Dominican Republic, there is a town called Polo. There you can go challenge gravity at the Magnetic Pole (El Polo Magnético). If you stop your car in neutral gear downhill, your car will roll up! As cool as it sounds, this is what’s called a gravity hill. This is caused by an optical illusion that has to do with the shape of the road and the landscape. Still, pretty cool to experience in person!

5. Unique, precious stones. The Dominican Republic has two unique endemic stones that can’t be found anywhere else in the world: Dominican Amber and Larimar. The first one was created millions of years ago due to the warm climate in the DR and the extinct prehistoric leguminous tree, Hymenaea Protera. It is considered the finest amber available worldwide because of the high concentration of fossils included and it’s clear composition. The second one, Larimar, it’s a rare blue variety of the silicate mineral pectolite, with a color that changes from light blue, to green blue to deep blue.

6. Have fun down the water falls! If you’ve never heard of the 27 Waterfalls of Damajagua you’ve been missing out! This is a great adventure spot for families with kids over the age of 12 who enjoy nature, rivers and jumping down waterfalls. You hike all the way up and then come down through a series of caves and water slides for a super fun ride.

7. Winter home of massive, beautiful creatures. Every year, the northeastern coast of the Dominican Republic, the Bay of Samaná, welcomes between 2,000 and 3,000 of giant humpback whales. They migrate from the north Atlantic to the warm Dominican waters for calving and breeding as their newborns don’t have enough fat to survive the cold winter waters up north. They stay until March before returning to their summer feeding grounds between North America, Greenland, and Iceland. Technically, the humpbacks are native Dominicans living abroad for the summer, how cool is that?!

9. A very salty lake, Lago Enriquillo. The lowest elevation in the Caribbean, Lake Enriquillo, it’s an hypersaline lake that covers 375 square kilometers. A very diverse and interesting wildlife inhabits the lake and surrounding areas, among them, beautiful pink flamingos! It is also home to the largest population of American crocodiles (Crocodylus acutus) living free in their natural habitat in the Caribbean,. There are more than 400 species in its waters.

10. Palmchat, the national bird of the country it’s totally unique! Known in Spanish as “cigua palmera,” it takes its name after the palm trees. This is where she creates her nests to live and harvest its fruit to feed on it. Palmchat is an endemic species of the island of Hispaniola. It is the only member of the family Dulidae, what makes it one of its kind.

They are community-driven. They build their elaborate nests together with a bushel pile of sticks that form an apartment. Each pair of birds (up to 50 pairs) has its own portal to the exterior as well as internal passages. The sticks used in the nests come from wood, coffee, and orange trees.

Like Dominicans, Palmchats are known to be joyful, noisy, social and love singing. Who knows, maybe they are singing to the tunes of merengue music, our national rhythm!

If you want to learn more about Dominican Republic’s
culture, attractions, cuisine and resources, you can visit these sites:

My own posts about Dominican Culture:

3 Happiness Lessons Our Kids Can Learn From Dominican Culture

Saona Island Excursion by Catamaran And Speedboat in The DR

Suggested Activities To Do With Your Kids

Family Travel Guides from Around the World

September 27
Discovering the World Through My Son’s Eyes: Hispanic Inspired Crafts for Kids

Giveaway begins September 15 and goes through October 15, 2017. Enter below for a chance to win one of these amazing prize packages! Some prizes have shipping restrictions. In the event that a winner lives outside the designated shipping area, that prize will then become part of the following prize package. For more information, read our full giveaway rules. 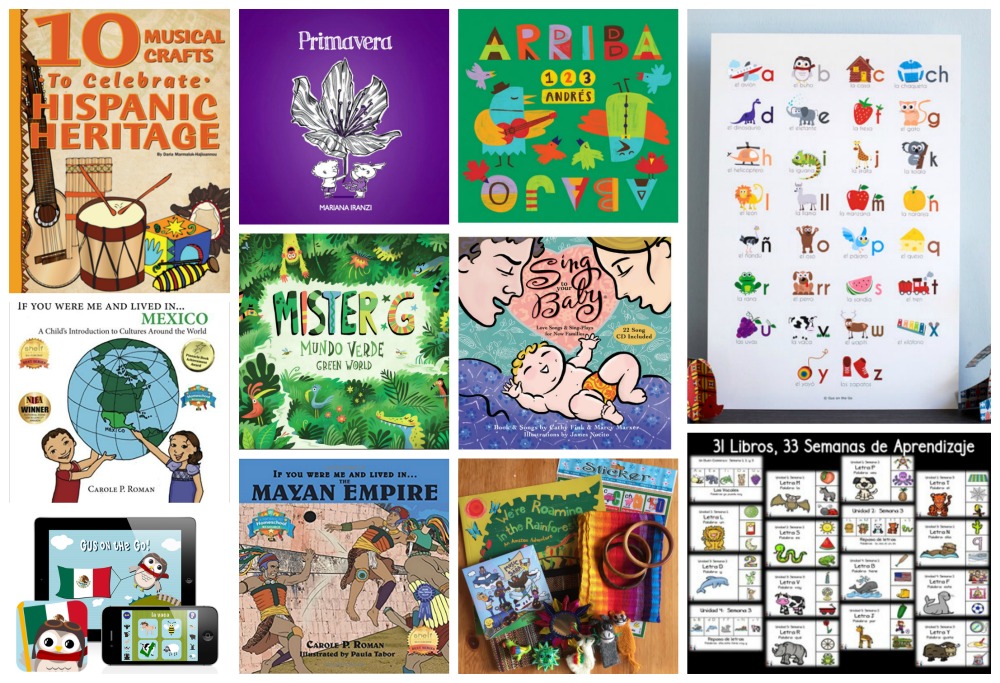 From Mariana Iranzi: A digital copy of her new CD Primavera
From Cathy Fink & Marcy Marxer: A print copy of Cántale a tu bebé with music download – US Shipping Only
From 123 Andrés: A copy of the CD Arriba Abajo (digital copy if outside the US)
From Spanish Playground: Set of books, crafts, and toys from Latin America – US Shipping Only
From Carole P. Roman: Set of If You Were Me and Lived In… books on Mexico, Brazil, Cuba, Peru, Portugal, and the Mayan Empire – US Shipping Only
From Mister G: A copy of the new CD Mundo Verde/Green World (digital copy if outside the US)
From World Music with Daria: Celebrate Hispanic Heritage Musical Craft and Coloring E-Book
From Gus on the Go: Spanish Alphabet Print (US Shipping Only) & single-use promo code for Spanish for kids language app
From Lectura Para Niños: A set of printable little readers, one for each letter of the Spanish alphabet. Designed to last the entire school year, with one new book each week plus several review weeks included throughout the set 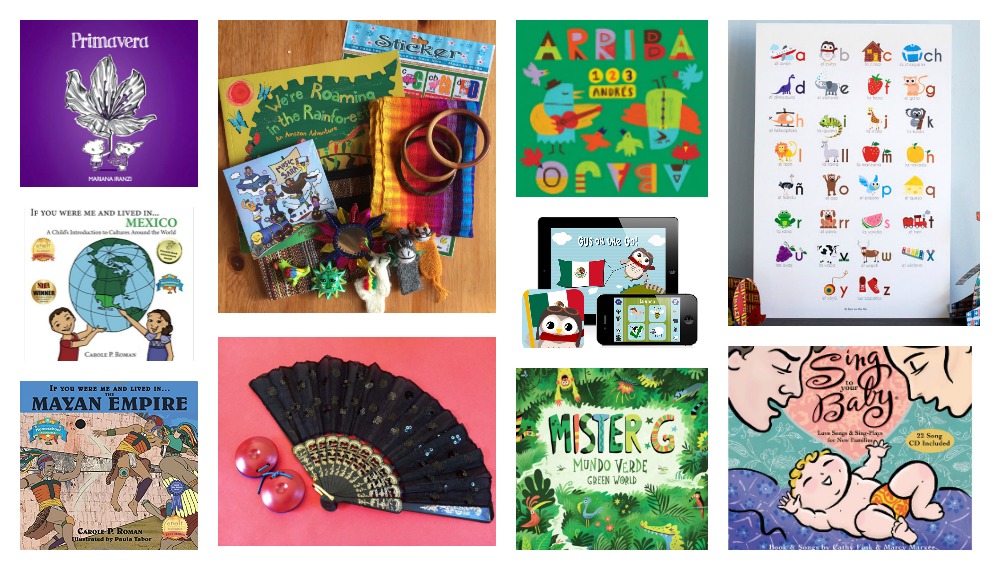 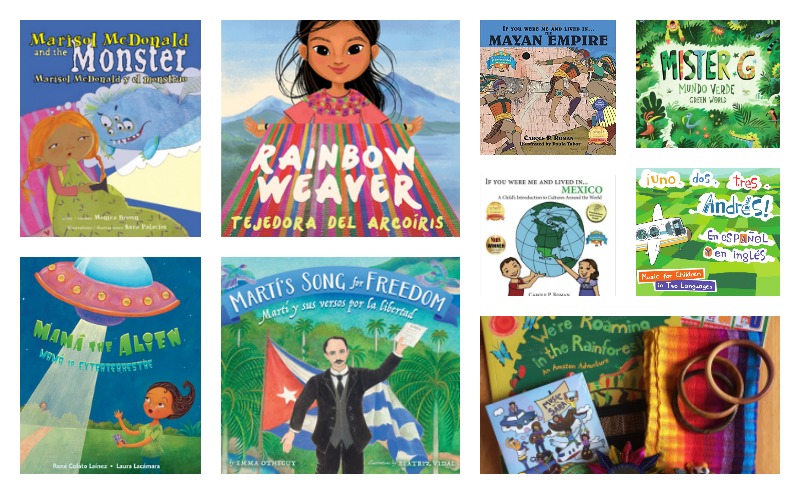 From Cathy Fink & Marcy Marxer: A print copy of Cántale a tu bebé with music download – US Shipping Only
From 123 Andrés: A copy of the CD Uno, Dos, Tres, Andrés! (digital copy if outside the US)
From Spanish Playground: Set of books, crafts, and toys from Latin America – US Shipping Only
From Carole P. Roman: Set of If You Were Me and Lived In… books on Mexico, Brazil, Cuba, Peru, Portugal, and the Mayan Empire – US Shipping Only
From Mister G: A copy of the new CD Mundo Verde/Green World (digital copy if outside the US)
From Lee and Low Books: Martí’s Song for Freedom/Martí y sus versos por la libertad; Rainbow Weaver/Tejedora del arcoíris; Mamá the Alien/Mamá la extraterreste; Marisol McDonald and the Monster/Marisol McDonald y el monstruo – US Shipping Only 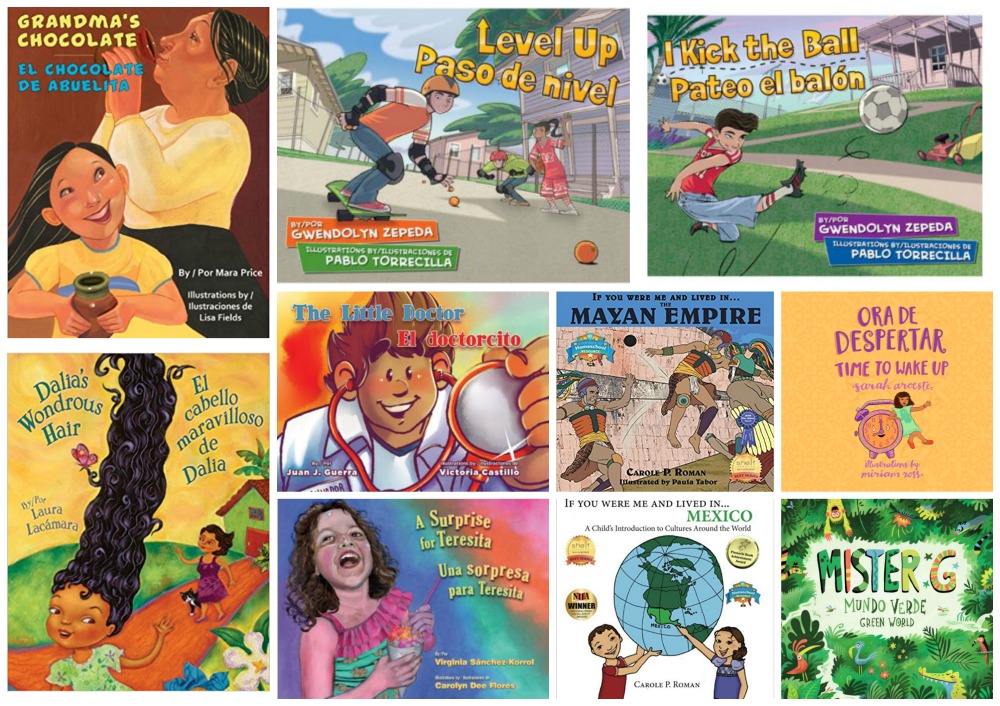 From Carole P. Roman: Set of If You Were Me and Lived In… books on Mexico, Brazil, Cuba, Peru, Portugal, and the Mayan Empire – US Shipping Only
From Mister G: A copy of the new CD Mundo Verde/Green World (digital copy if outside the US)
From Sarah Aroeste: A copy of the new Ladino/English bilingual picture book Ora de Despertar/Time to Wake Up – US Shipping Only
From Arte Público Press: Picture books Esteban de Luna, Baby Rescuer! / Esteban de Luna, ¡rescatador de bebés!, The Little Doctor / El doctorcito, Dalia’s Wondrous Hair / El cabello maravilloso de Dalia, Grandma’s Chocolate / El chocolate de Abuelita, I Kick the Ball / Pateo el balón, Level Up / Paso de nivel, A Surprise for Teresita / Una sorpresa para Teresita – US Shipping Only We are giving away an extra copy of the CD Mundo Verde/Green World from Mister G (US Shipping Only) and up to 10 digital downloads of this brand new album: Watch a video of the title track!

As a multiculturalism, diversity and inclusion expert, who raises cultural awareness to create social change, Dania Santana helps parents and children understand and embrace multiculturalism and diversity as a way of creating a peaceful and harmonious society without having to give up their own cultural values and heritage. Dania is a published author and speaker on the subject of multiculturalism. Also a storyteller and social media influencer, she has made it her mission to educate and empower people all over the US about the importance of a multicultural society, and to show how the contributions of Latinos are crucial to the advancement and success of the United States as a whole.