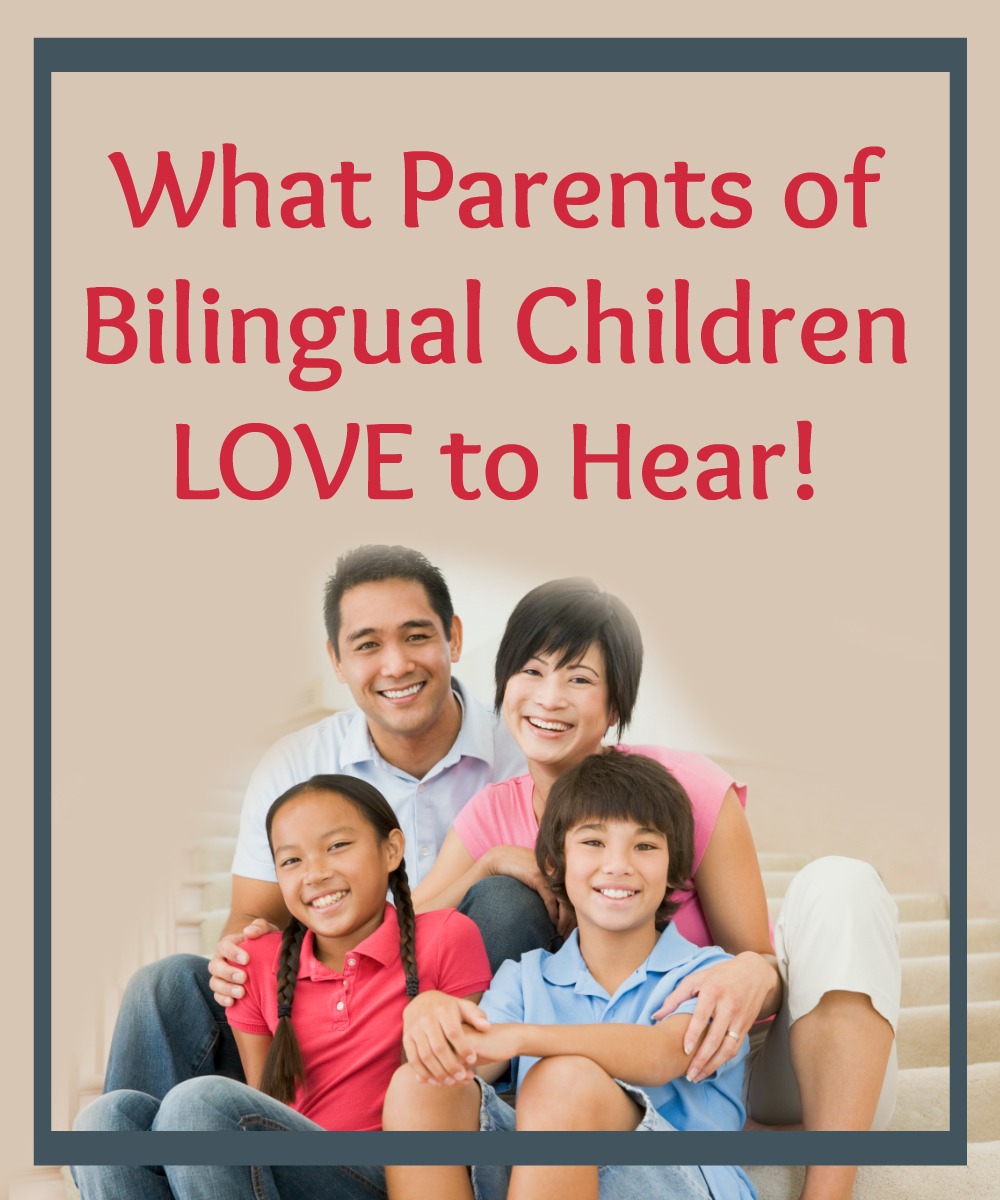 Parenting is never without its challenges – throw a couple of extra languages into the mix and things do not get any easier. We all need encouragement from time to time and here are some thoughts from multilingual families on what you could say to make our day!

Ute from Expat Since Birth

“You’re such a great example to (other) children!” When children grow up multilingual they usually not only switch languages frequently but they also change from one cultural group to the other, adapting and embracing diversity. This is a very positive side effect and it is worth to be recognized because it gives those children a very open mindset. They usually don’t judge others by the language they speak or by the culture they come from, they tend to be much more curious and accepting. And this is, in this time of increasingly more global living families, an important asset that should be praised. You can find more things to say in Ute’s post

Varya from Creative World of Varya

“Your kids are amazing and you are just a super mom”… no, I am kidding really. What I like to hear? Pretty much nothing. Bilingualism should be something normal in our time. And when people oh and ah about me and kids speaking 2+ languages, I always tell them that they can too if they really want to – we have all the tools and means available online, if we are not able to physically go to class.

I love to hear encouragement from other people, they know that I teach my heritage and my culture to my kids. They complement how well my children interact with others in both languages. It is funny because my son has a speech issue, so he often mixes both languages to find ways to communicate!

I love when people encourage me to keep speaking English with my children, even though nobody speaks it where we live, in a small town in Italy. We may be at the park, and instead of thinking I am being rude speaking to my children in another language, they smile and encourage their children to learn some words. The nursery teachers often tell me that they ask my four-year-old to translate things when they play games so that they can all learn some English. They have actually learned quite a lot from him. That has to be one of the biggest compliments of all!

I love hearing our 3-year-old say Spanish words mixed in with his English. For example, he says mas instead of saying more. I also love hearing his Spanish pronunciation. He does so well! Many times I hear how impressed others are with my daughter’s Spanish. It makes me feel good knowing our children are learning and accepting another language. I know we are doing something right, broadening their horizons in Mexico!

I like to hear my kids speaking minority languages to others and to each other. This is what matters to me and it is not what others say about their abilities. However, I appreciate when people understand how much work it is for me, as the only language speaker, to support the kids to reach the fluency level they are at.

Patricia from Our Whole Village

My daughters feel very proud and motivated when someone praises them for knowing three languages so I appreciate that the most. It helps them recognize from a young age that learning another language is a special gift.

Honestly? “Go ahead and speak Spanish with your little ones here. It’s ok if we don’t all understand it. Good for them that they get to learn two languages at once!”

I am always hoping they would say something like this: “I wish I had done the same with my children!” so I can invite them in the journey saying: “You still CAN do this! It is never too late to learn a second language. There are many resources for supporting your child’s bilingual development”

Our older one is still a toddler so he usually says words in only one of the languages (except for more/más that he says in both, he is a little glutton). I love when people try to learn the word he is using in order to understand what he is saying. He is teaching Spanish to everyone!

Lisa from Knocked up Abroad

“He speaks like every other 4-year-old Swedish boy. In fact, I think his Swedish is better than his English.”  It’s what has been said to me and I loved it. It meant that our move to Sweden had not handicapped our children whatsoever. Integration (for them) was seamless. And I just had this exchange with my 5-year-old son after I tried to speak with his teacher about something that happened yesterday.
Me: “Sometimes I just can’t say what I want in Swedish because I don’t know the words. I sound funny, don’t I?”
My son: “You don’t sound funny at all.”
I could kiss him a million times and it still wouldn’t be enough!

From non-Russian speaking strangers: “What language did you just use? Russian? How cool that they speak both!” “She just spoke English to her Dad and Russian to you – I am surprised how easy that was for her!”

From Russian speaking strangers: “Thank you for teaching them Russian and keeping the link to the it heritage!” “She speaks Russian so well, did you just just move from Russia?” (kids have lived in the US all their lives).

From fellow multilingual families: “I know how much time and effort you have to put in to help your children be bilingual. Keep doing it!”

Monica from MGB – Language for Life

I get comments on my multilingual childrens’ languages (three in their daily life) almost every day. Very rarely it is negative comments, we have two quite highly valued languages in our family, Swedish and Spanish. Of course it is pleasing to hear these positive comments, but sometimes I can still be annoyed about it. Even though there are more multilingual persons in the world than monolinguals, most people seem to believe it is something extraordinary, and that is not the case. Everyone can be multilingual, and many probably already are, speaking several dialects, which implies multilingualism in another way.

Mariam from And Then We Moved To

Some of the things I love to hear as a parent of multilingual kids are:
1. “Wow, your kids are so lucky to be learning German, Urdu, Italian and English! What a great perspective of the world they are going to have!”
2. “Your kids are so lucky to live in Singapore and Dubai – how fantastic they get to learn Mandarin and Arabic in school!”
3. “Of course it is not confusing for them to be surrounded by so many languages”
4. “It’s great to see you are passing on your identities to your children by teaching them your native languages”
5. “I’m so happy I can talk to them in German!”
6. “Wow, she sounds like a native Urdu speaker, with no accent!”

Annabelle from The Piri Piri Lexicon

Something that was actually said to me by an American teacher who chatted to my daughter in English: “You must be doing something right with all of your languages because she is great in English too”. English has been a passive language up to now for us.

Lisa from Cooking with Languages

I love that we are often told that we are not ‘typically British’ when people hear us speaking Spanish.  We are part of a community (huerta) market garden project and are visiting local private market gardens in Mijas. These are families that have lived here all their lives and it is a real privilege to take part. When the owners ask who are ‘foreigners’, my children are pointed out as being non-Spanish by birth but considered as locals, Mijeños. Possibly the biggest compliment a Mijeño could give us.

It is always positive to hear people say:
1. “What language are you speaking to your children?” followed by “They are so lucky to learn another language at this (young) age. This is great!”
2. “It is so nice to see that they are willing to speak to you in Chinese at this age.”
3. When visiting Chinese-speaking places, like Chinatown, or Taiwan. “You speak Chinese? Are you a mixed child… (brief inspection) Yes, you are. Very well. Keep it up and speak Chinese! Here is a little gift (sometimes, a piece of candy) for you for speaking Chinese.” I think what people say to parents the kids can hear and when the comment is positive it is a booster shot for learning energy and a positive enforcement when the praise is from a stranger.

“Oh, I can speak with them!” – hearing the delight in the voice of far-away relatives and friends when they notice that my daughters are able to communicate with them in their language is always so heart-warming. “Well done you!” has often been the follow-up comment and that is something all parents raising their kids to speak more than one language should get to hear on a daily basis – it is hard work, but so worth it!

Owner at Talkin' Ltd t/a multilingualparenting.com
Rita Rosenback is the founder of the Multilingual Parenting site, author of “Bringing up a Bilingual Child” and a Family Language Coach helping multilingual families. She also gives talks and holds workshops for parents and teachers on the topic of bilingual children.