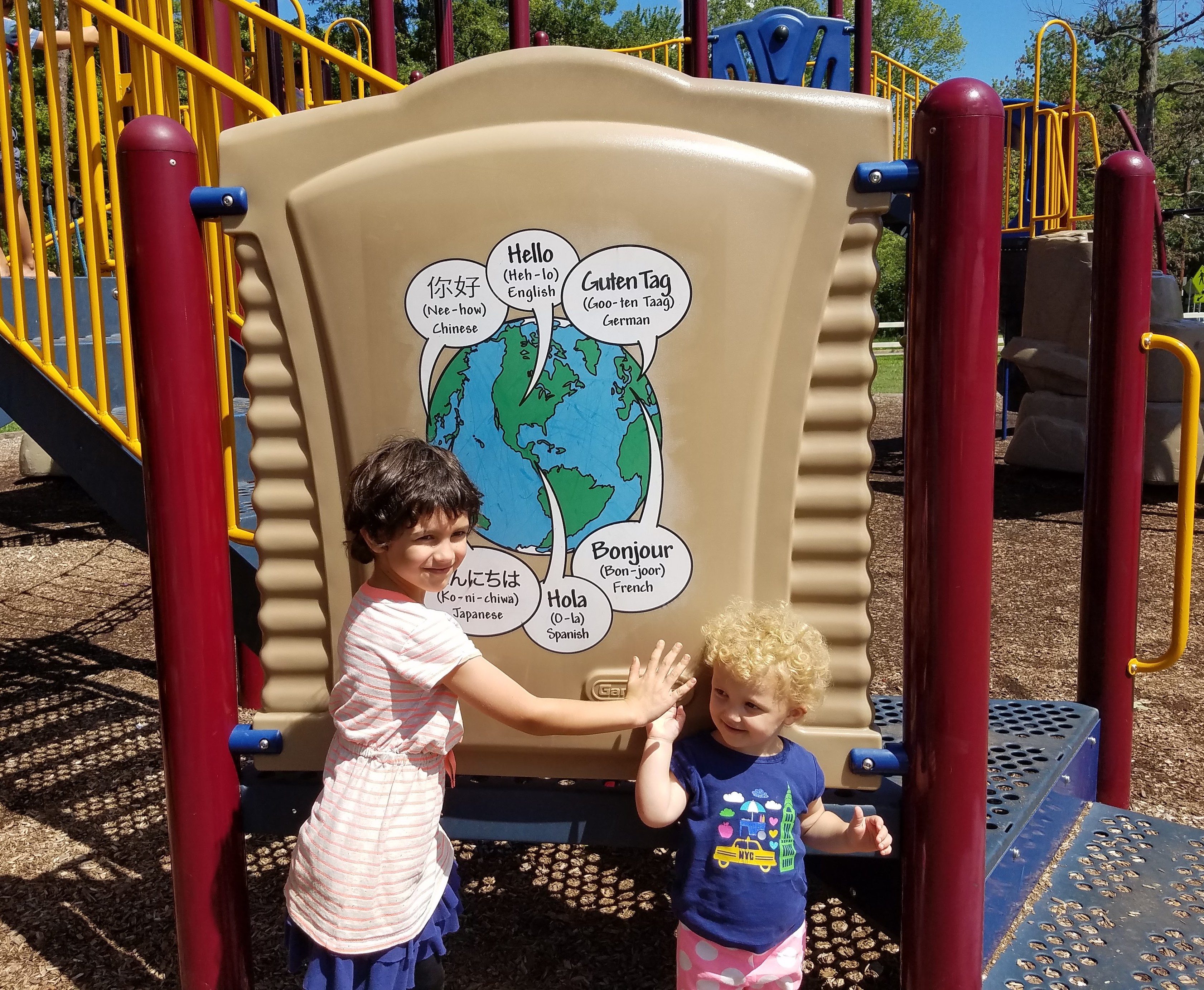 Do you want your child to learn a new language but feel you cannot help them because you aren’t fluent in the target language? Modeling language learning yourself is actually a powerful tool with many hidden benefits.

As someone who has found a tremendous amount of joy in the study of languages (Russian was my first love after my native English, but Spanish has had the most sticking power), I always felt sure I would share this great love with my children. Before I was anywhere near ready to become a parent, I was certain I would become fluent in at least one of the languages I was studying so that my then theoretical partner and I could use the One Parent, One Language method in our theoretical, multilingual household.

Much like my intention to never feed my children processed sugar or speak to them in a cross tone, my plans of being a bilingual parent did not come to fruition. By the time my first child arrived, bringing with her the overwhelm so common to new motherhood, I had taken a break from my studies and, some days I was hardly even fluent in my native English. Raising bilingual children seemed like a lofty, probably unattainable goal.

By the time the dust settled and I got a handle on the whole mothering gig, I had determined that Spanish was going to be the most applicable second language for my children to learn, but my own skills were rusty and my feelings of inadequacy stronger than ever. Who did I think I was trying to speak Spanish at home? My poor child, if she did learn anything at all from me, would be cursed with a terribly inauthentic accent. I was tempted to give up on the idea of speaking a second language with my children entirely. I made halfhearted attempts to introduce vocabulary during play times. I sang songs and read bilingual books, but I was too focused on what I wasn’t doing (speaking perfect Spanish all the time) to appreciate what I could do.

As our family grew and my babies became children, the one truth that I found applied to all of them was that they learned far more from watching me live my life than they did when I made a point of trying to teach them things. Modeling language learning is an incredibly powerful tool. Eventually, I realized that if I wanted my children to learn Spanish early on, modeling was my best bet. Having slacked for several years, I had a lot to learn myself, and I set out to do it in front of my kids. At first, I saw this as an inferior way to teach them a second language, but as time has gone on, I’ve discovered that, while they won’t learn Spanish as much or as well as they would from a fluent, native speaker, modeling the act of learning a second language has its own unique benefits that are worthy of note and celebration.

In addition to vocabulary and grammar:

1. Children learn that all languages are beautiful and a joy to discover

I have a child for whom some skills come very easily. When something requires great effort or a large number of mistakes along the way, they are inclined to treat it with disdain, perhaps as a protective mechanism. I was extremely sad when, upon finding it a challenge, my child took this attitude toward Spanish. There was a time when they wanted absolutely nothing to do with learning the language.

I quickly saw that talking about it would do no good, and this is when I stopped trying to get my children to speak Spanish at all. I simply continued about the business of learning it myself, in front of them. As naturally as I could, I made sure that I showed my love of the language very clearly. I let my favorite words roll off my tongue when I spoke them and made remarks like, “I just love that word. Isn’t it beautiful!?” Before long, my oldest was reading over my shoulder when I played duolingo, wanting to answer all of the questions for me — and getting most of them right. As I focus on modeling language learning, slowly but surely, my children are seeing that all of the languages of the world are at least as beautiful and fascinating as our own, and enjoying them is a reward in itself.

2. Children see that learning new ways to communicate with others is valuable

In my own quest for fluency, I find myself thinking often about cultural appropriation and how it applies to the use of languages other than my own. It’s easy to get distracted in language studies by the goal of a grade or a resume. As we do life alongside our children, however, we can find and seize opportunities to show them that the real value in learning a new language is realized when we use it to reach out to and connect with people in our communities. Getting to know our neighbors, making new friends on the playground, being able to offer help when it’s wanted or to simply chat with people we meet while out and about: these are just a few of the opportunities we’re afforded when we learn to communicate in more than one language. It allows us to be better, more connected citizens of the world in which we live and this, not personal gain, is what I would like our family’s goal to be.

3. Children discover that our multicultural world is a rich and wonderful place

Just as being able to identify the many gorgeous flower varieties in our region, or name the animals found in our ecosystem causes us to become more sensitive to and aware of these things in everyday life, knowing even the basics in a language heightens our awareness of that and other languages in the world around us.

Prior to becoming a language learner, I would hear an unfamiliar language being spoken and simply filter it out, since I didn’t understand any part of it anyway. Now, when I hear people speaking in a language other than my own, my ears perk up, trying to identify it. If it’s not immediately obvious to me, I notice the ways in which it sounds like a language I’m familiar with, and pick out elements of it that I particularly love. Sure, this can border on nosy at times, but in general, being aware of the linguistic diversity around us and seeing and appreciating the ways in which languages differ — or are not so different at all – is generally a great thing. Opportunities to talk about respecting others’ privacy, even in public places, come up, too!

4. Children recognize that learning a new skill is not easy, but it’s worth the effort.

Modeling language learning means out children see our struggles as well as our achievements. Seeing us practice regularly and still not achieve perfection, or even anything close to it, sends our children the message that some things are worth working for. Seeing our joy when we do make measurable improvement can be an inspiration, too. I make no effort to hide my excitement when I discover something new, or my pride when I remember a word or a verb tense I’ve been struggling with, and I see my children recognizing their achievements in this area, too.

5. Children internalize the idea that making mistakes is okay, and in fact inevitable.

I used to worry about my imperfect accent, and about the grammatical errors I probably make even more often than I realize. Now, I’m seeing that my children are friendlier to themselves and more comfortable with their own mistakes when they see me make my own regularly. When I practice Spanish with native speakers especially, my children see me ask for help. They see me try something I know I can’t do quite right, accepting correction gratefully and taking feedback into consideration, and they’re more inclined to do the same.

Shinichi Suzuki, who based his famous method for teaching music on the natural laws of language acquisition, wrote in Nurtured by Love that: “Our aim needs to be the nurturing of children. The moment we rigidly convince ourselves, “Education is what we’re after,” we warp a child’s development. First foster the heart, then help the child acquire ability. This is indeed nature’s proper way.”

This view is just as relevant to those of us who hope to bring our children up in homes that value multilingualism as it is to those seeking to foster musical talent. It’s not education that we’re after, but a heart that is nurtured and thus ready to learn and appreciate the beauty and wonder that is all around it. Learning a language is so much more than just acquiring vocabulary and studying rules of grammar. When the love and joy of learning is present, the rest follows along in due time, and the benefits go well beyond language acquisition.

Melissa is a Montessori guide and mother of three children six and under living just outside Washington, DC. She is passionate about nurturing children in an environment that gives them the time and space to be themselves, while learning to love, appreciate and care for the world around them.