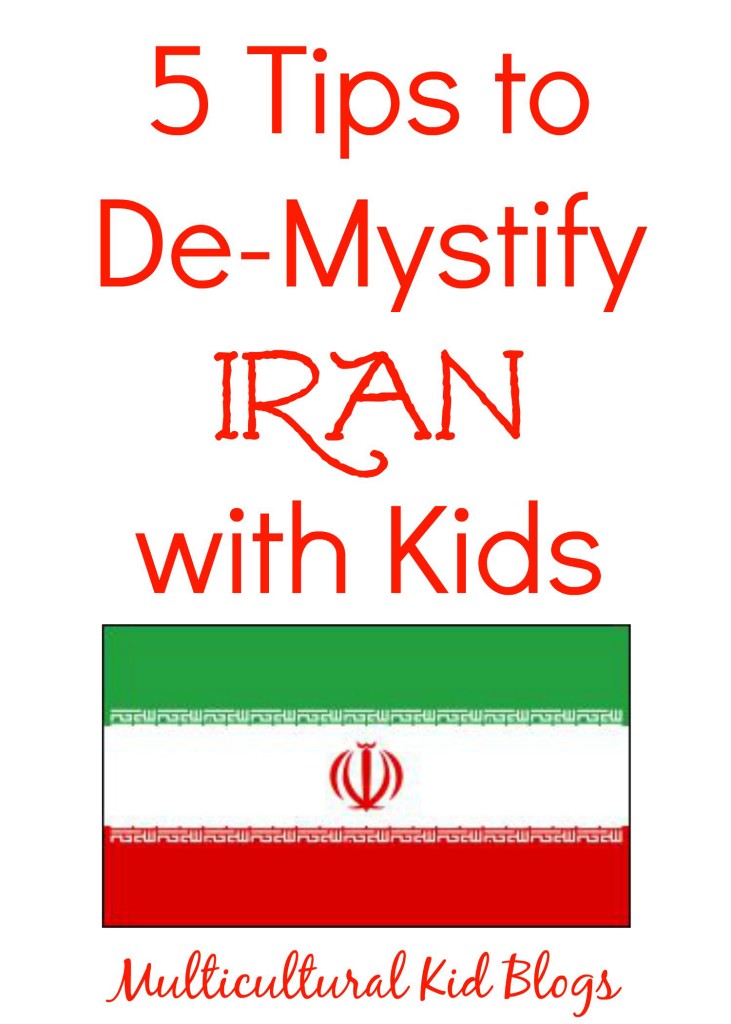 Thanks to a 36-year social and economic embargo between Iran and most industrialized nations, Iran remains a mysterious, misunderstood nation. As a generation of parents who might remember the 1979-80 hostage crisis and associate images of angry protesters burning American flags on Tehran’s streets, or simply have no personal contact with Iran or Iranians at all, most parents today can feel ill-equipped – or hesitant – to expose their children to this important Middle Eastern nation. You might know it as a hub for state-sponsored terrorism, human right violations, fundamentalism, and oil wealth; but did you also know it’s a center for poetry, fashion, fine art, a renaissance in filmmaking, sophisticated gastronomy, creative protest and social justice movements, and even feminism?

That such contrasts play out in Iran, the land of the ancient Persians, points to why it’s so fascinating to outsiders, and particularly, to Iranians themselves! I know, because I was born in Iran. Sadly, my last visit was in the 1970s, before the Revolution. Due to ongoing religious persecution, I haven’t ventured back as an adult; and yet, I love this country, its social quirks, arts, language, people, and of course, the food – and I look forward to the day that I can return. With the gradual thawing of relations between Iran and the West, this is an ideal time to get to know this storied land, particularly through the eyes of our children, who, I hope, will have much more contact with Iran than our generation has.  Here are a few tips for getting to know Iran, right from the comfort of your Persian carpet.

5 Tips to De-Mystify Iran with Kids

1. Don’t say “EYE-ran,” or “eye-RAIN-ian” but do say something in Persian! A tell-tale sign of someone who’s got Persian friends or any experience with the culture is that they call the country “ee-RON,” the people “ee-RON-ian” or Persian, and the language Persian (or Farsi). It’s common to interchange the name of the language, but saying “I speak Farsi” is like saying “I speak Español,” and no one speaks “Iranian,” just as I don’t speak “American.” Farsi is the name in its own language, but in English it’s known as “Persian.”  While you’re at it, learn a few Persian phrases, like “Salam” (Hello); “Haleh shoma chetoreh?” (How are you?) and “Merci!” (yes, it’s Thank you!) One more thing: don’t confuse Arabs and Persians. Language, customs, food, social mores and more are distinct; “Persians” feel strongly about correcting this – as comedian Maz Jobrani explained.

2. You must eat Persian food! Bonus: Kids love it!! Persian food is hands-down my all-time favorite cuisine. Not spicy or greasy or heavy or involving game or other aquatic or wildlife that can offend my senses, this subtle, sophisticated, fragrant cuisine is made of recipes that have been passed down thousands of years, using ingredients like pomegranate, saffron, basmati rice, large quantities of herbs like dill, parsley, leeks, fenugreek (my friends growing up thought we stored marijuana in the kitchen – it was fenugreek!), pistachios and rosewater. Here’s are some great Persian cooking blogs, which mentions my all-time favorite Persian cookbook author, Najmieh Batmanglij. Like a good Persian girl, I studied hard, pursued a career, and couldn’t cook when I got married; but her Food of Life: Ancient Persian and Modern Iranian Cooking and Ceremonies

taught me to cook “better than [his] grandmother,” according to my smitten husband! (Don’t miss this article on creating a Weeknight Persian Picnic!)

3. “Watch” Iran. The Iranian film industry has flourished over the past thirty or so years, and “thanks” to heavy censorship, the films are generally family-friendly, though they often contain sad themes. One classic that’s appropriate for all ages, and gives a good sense of the hospitality, hardship and resilience of Iranians, is Children Of Heaven

, from 1999. Offside, still banned in Iran, is about girl soccer fans just trying to watch a big game in the stadium. The movies give a picture of Iran that’s rarely seen. In addition, check out the New York Times on-line series “Our Man in Tehran” for an updated, personal account of life in Tehran, or Anthony Bourdain’s visit to Tehran on his CNN show, “Parts Unknown.” The Bourdain episode resulted in Iranian-American journalist Jason Rezaian’s imprisonment on account of spying charges; if you watch the show you’ll get a pretty clear idea that Rezaian loves the country, is an ethical journalist, and his imprisonment is one more glaring example of the regime’s disregard for internal human rights – a bitter pill that goes with otherwise lovely images the camera captures.

4. Wax poetic. In Philadelphia where I live, monuments to Revolutionary War heroes are plenty. In Iran, it’s monuments to poets. Iran claims poets such as Rumi, Hafez and Attar, still incredibly popular, globally, in part due to their mystical view on life, with universal themes. Rumi has been recognized as the best-selling poet in the US. Take a look at Peter Sis’s gorgeous Conference of the Birds, an interpretation of Attar’s allegorical tale of search and inner strength, and familiarize yourself with Rumi’s translated poetry, such as:

“Raise your words, not voice. It is rain that grows flowers, not thunder.”

“Out beyond ideas of wrongdoing
and rightdoing there is a field.
I’ll meet you there.

When the soul lies down in that grass
the world is too full to talk about.”

5. Seek. The dominant image of ideology in Iran comes from the politically powerful Mullahs and Ayatollahs, but did you know that Iran is the birthplace of two other world religions – Zoroastrianism and the Bahá’í Faith? Westerners might be familiar with the Three Wise Men who followed the star to Bethlehem on the occasion of the birth of Jesus Christ; these were Zoroastrians. The Zoroastrian religion pioneered the idea monotheism about 3,500 years ago.

And in the 19th Century, the Bahá’í Faith was born in Iran and has since spread to every country and territory, making it the second most-widespread religion on earth, teaching that there is One God, that all religions share a common spiritual foundation, and that Humanity is One, with principles like the equality of women and men and the need for universal literacy and a common, worldwide auxiliary language stemming from these core spiritual teachings. Despite their commitment to nonviolence and obedience to the government of wherever they reside, Bahá’ís are severely persecuted in Iran. Despite being systematically denied higher education and most basic human rights in Iran, they continue to offer community service like spiritual and general education and empowerment for children of all religious backgrounds, as is organized at the grassroots level by Bahá’ís and friends of diverse beliefs throughout the world.

Given political circumstances since 1979, millions of Iranians have fled their country, so this means there is a good chance you have Iranians (a.k.a. Persians) living near you. Ultimately, the best cultural education comes from people: reach out, share a meal, ask sincere questions, let a friendship unfold. Iranians are known for their friendliness and hospitality, so it’s even easier than you think. And you’ll get to experience one of my favorite maxims for global citizenship: World peace starts at the dinner table!

This post is part of the Global Learning series, where each month we focus on a different country. This month we are learning about Iran, so be sure to check out our main page for more great ideas for sharing about Iran with kids!

Also, don’t miss our blog series and giveaway for Middle Eastern and North African Heritage Month, going through the end of August!

Author, Growing Up Global: Raising Children to Be At Home in the World (Random House/Ballantine Books) and The Global Education Toolkit for Elementary Learners (Corwin Press, 2014), www.growingupglobal.net