“It behoveth the people of Bahá, throughout these days, to provide good cheer for themselves, their kindred and, beyond them, the poor and needy, and with joy and exultation to hail and glorify their Lord, to sing His praise and magnify His Name…”  -Bahá’u’lláh

In communities large and small across the globe, Bahá’ís are currently celebrating a little known holiday called Ayyám-i-Há.  For members of the Bahá’í Faith, this period (February 26 to March 1) is characterized by charity and celebrations, just before the 19 day Fast that leads up to the Bahá’í New Year (Náw Ruz) on March 21. 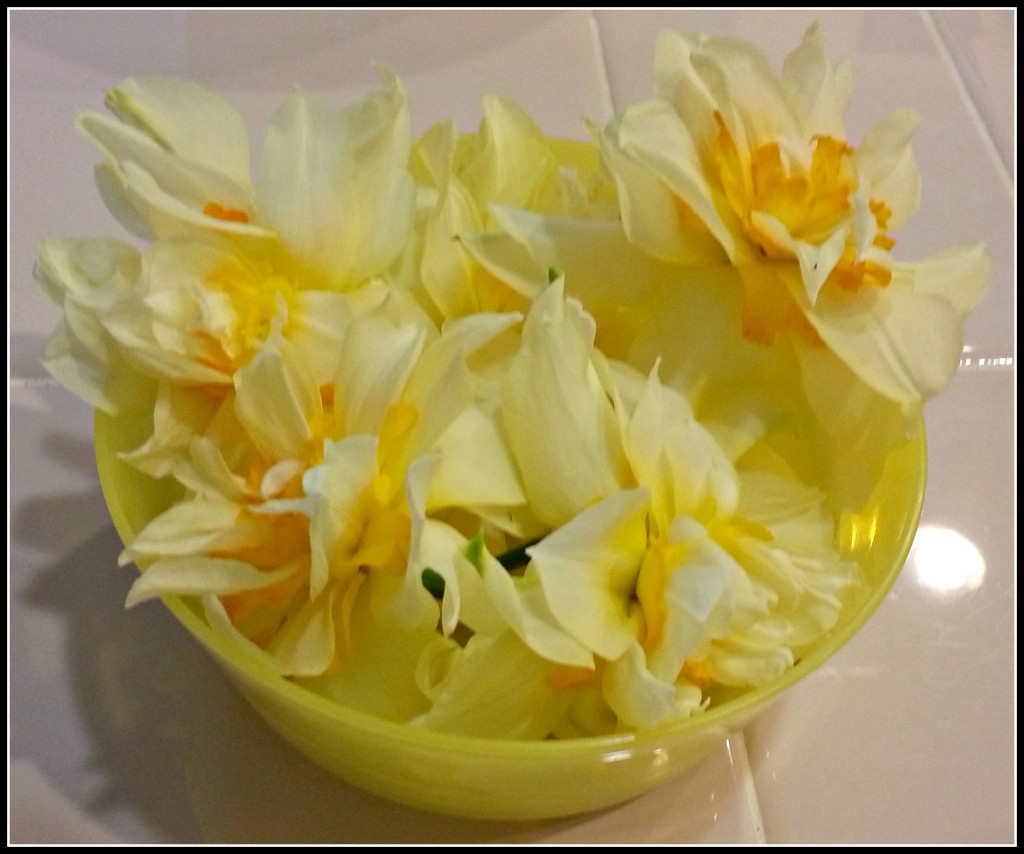 There are no rituals associated with the holidays, and, as the Bahá’í Faith is a relatively young religion, there are no widespread traditions either.  There are some common themes, however, based on Bahá’í scripture like that quoted above: charity, fellowship, and gifts.

Here is a look at how Bahá’ís in communities around the world celebrate this special time of year:

Juliet in Chicago: We usually have a community party and often a canned food
drive. At home we decorate with balloons, exchange gifts, enjoy a special
meal as a family and do something nice, like a gift or baked goods, for our neighbors and teachers.

Taraneh in Massachusetts: So as my kids are getting bigger, 3 years and 10 months as of now, I find myself constantly looking for opportunities to make our Bahá’í celebrations something to look forward to. As my son is understanding more now, I decorated the house, put up stockings for their gifts, put up banners so the house looks different, and I tell him it’s for Ayyám-i-Há. Just yesterday we sent out an email to our Bahá’í friends in our community and neighboring town about an Ayyám-i-Há party at our home. It’ll focus on the younger kids, but I’m thinking of making this an annual thing. Growing up in India, where everyone participated in most religious festivals, it wasn’t a struggle for our parents to make our own celebrations a big deal. The West makes it a little harder with emphasis on Christmas mostly and the unrelated materialism, but I’m enjoying spearheading these new traditions for my own kids.

Tara: This year we hope to have a Spiritual Miner’s theme with games that correlate to the quote “Man is a mine rich in gems of inestimable value…” Children will “excavate” gems of virtue (glass beads with virtues and beautiful designs) enter a dark “cave” that they must illumine (with a flash light) to see drawings, quotes, and pictures of goodly deeds and beautiful celebrations. Fun miner’s helms to crown themselves with His word and action. We will also use a beautiful box for a “treasure chest” to give and receive small gifts. I’m sure to find more inspiration but I am thrilled with the idea of spiritual miners as physical miners work hard and must work in unity to achieve their goals.

Nuriyah in Virginia: I have a 3 yr old and a 7 mo old. We celebrate Ayyám-i-Há by decorating the house with strings of light. I also made a banner last year. Every year I hope to add more to the decor. This year I’m going to make a few more paper shape banners. When my daughter was a few months old, I had someone make a beautiful wooden treasure chest for us just for Ayyám-i-Há. On each day of Ayyám-i-Há, we put presents for each other in the treasure box and open it together. This year with my parents and brothers, who are also Bahá’ís, we are going to try to make sugar cookie, Bahá’í temples (kind of like gingerbread houses). It should be fun! On the days of Ayyám-i-Há, my daughter (3) and I are going to visit a few elderly friends and give them cards. We also made and donated some bookmarks to the library. Every year I hope to get better at this.

Julia: I have been a Baha’i since 1969, and I now have 9 grandchildren! Years ago the local grocery store would give away the flowers (tulips, hyacinths and roses) that were left over from Valentine’s Day that we would fill the house just in time for Feb 26th Ayyám-i-Há and the young ones would choreograph a show for the parents. I remember using the Ayyám-i-Há album with Bill Sears on the cover “Grandfather” surrounded by little ones (I sure wish I had it now!), nine pointed star cookies, and beautiful cakes…I am ever so proud to talk about that 1st baby community and how resourceful we all were!

Jason in California: We always try and so something special for the staff at our daughters’ schools. This year we are sending cookies 252 cookies between the two schools.

Kamelia in Lakewood, California: My daughter gives a gift to her classroom something for all the kids that they can use in the classroom with a note explaining that she is celebrating Ayyám-i-Há. Some teachers have asked her to get up and explain what her religion is. At home, we celebrate it during children’s class and junior youth class and collect canned food or whatever they decide to do for charity. In our community we have a dinner party and do the Elephant gift exchange game and sing Elika Mahony’s “Happy Ayyám-i-Há” song.

Elika Mahony in China: Every year on the eve of Ayyám-i-Há, we gather the children and their friends and serenade several families in the neighborhood that we know with Bahá’í songs and prepare a basket of homemade muffins for each family (we haven’t done that in a couple of years as the children are older now but it used to be a highlight). We also make a ginger bread house as a family tradition every Ayyám-i-Há and prepare gifts and cards for the neighbors as well as for each other. We usually have a small party for the children in our children’s class and invite their parents to celebrate too and prepare fun activities for the children. Celebrations happen almost every day by visiting others and taking gifts etc. It is a hugely festive time! 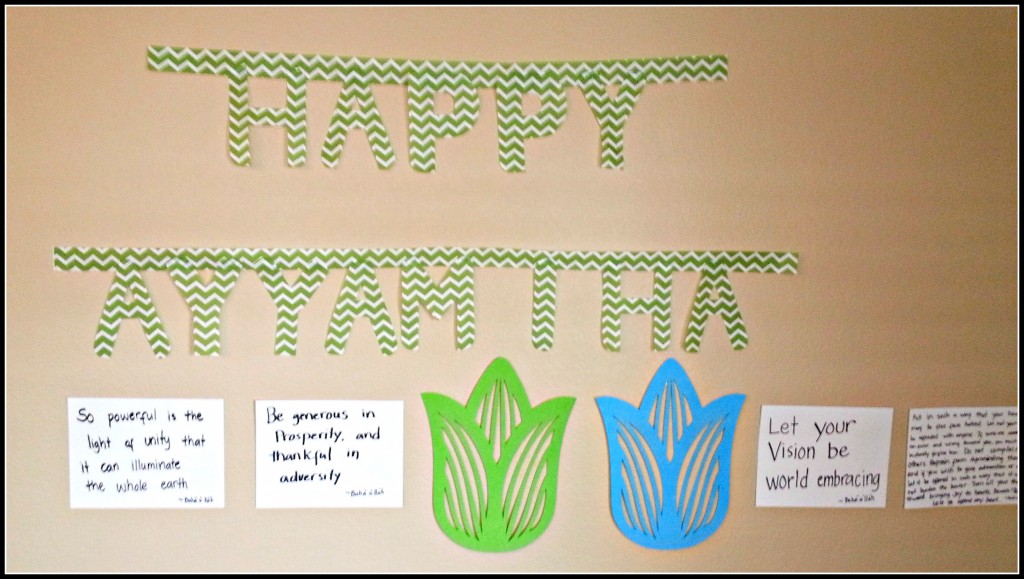 Here at our house, we invited friends over for a hot chocolate party!  As fate would have it, I was having camera problems, so I don’t have any photos of the hot chocolate, but here is the lovely banner my dear friend and co-host made, complete with quotations from the Bahá’í scripture.  As part of the celebration, guests brought donations for our local food bank.

For more on Ayyám-i-Há, be sure to check out this great roundup from InCultureParent, the wonderful resources on Enable Me to Grow, and (of course!) our own Ayyám-i-Há Pinterest board!

I am deeply indebted to those that graciously shared their thoughts and photos here.  Thank you and Happy Ayyám-i-Há!