Next Monday it is the national holiday, Columbus Day, in the United States. It is a day that gives me mixed feelings especially when explaining it to my daughter. Now I live outside of Boston, where their is a beautiful waterfront park named after Christopher Columbus. I am also married to an Italian American who of course loves Christopher Columbus since he was Italian. He tells the story of Columbus to our four-year-old daughter each night before she goes to bed.

Before having a child, the day bothered me, but I tried not to think about it. I was a school teacher, so I always got the day off. I found it ironic that we took days to honor people in history off from school instead of using the day to teach the children about the history, but that is another thought entirely for a different day. Having a child, I know I want her to know the history of the world, and Christopher Columbus is a huge part of our country’s history as well as the world’s, however, I also want her to know the true story of what he did when she is old enough to understand. I do not see Christopher Columbus as someone to necessarily glorify. I know his journey in 1492 changed the world, however he certainly was not the first European to “discover” America and for that matter he was not the first to know the earth was round. In 3B.C. Erastosthenes measured the circumference and diameter of the world and in 10 A.D. Al Maqdisi described the earth with 360 degrees of longitude and 180 degrees of latitude. (Source) 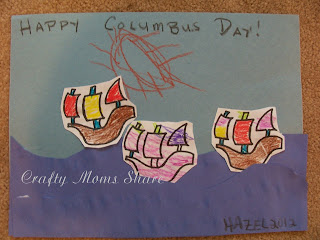 If we look at the story of Christopher Columbus, we see a piece of the world’s history. Backed by the Spanish Monarchs he sailed three ships, the Nina, the Pinta and the Santa Maria west to find China, India and the spices and treasures of the East. On October 12, 1492, he first landed in the Bahamas. He became the first European explorer to land explore America since the Vikings in the tenth century. However the Vikings had been to the “new world” before him. Later in the month, Columbus spotted Cuba. He thought it was mainland China. In December he found Hispaniola which he thought might be Japan. It is here that he established the first Spanish colony in America with 39 of his men. In March 1493, Columbus returned to Spain with gold, spices and “Indian” captives. (Source) Now if we stopped with this journey, I might be all right with it except the whole captive thing, but he returns three more times.

In September 1493, Columbus returned to Hispaniola and discovered his colony destroyed. He left his brothers, some of his men, and some native slaves to rebuild it. He traveled further west with more native slaves in search of the gold and treasures he promised the Spanish Monarchs. In lieu of the treasure he sent the Monarchs around 500 slaves. Queen Isabella was appalled since she believed any people found on this new land were Spanish citizens and thus could not be enslaved. She sent them back. (Source)

The real problem I have is that Columbus and the Europeans came and took enslaved the natives and also just searched for the wealth of the area. The Europeans were far more technologically advanced especially with weapons, so the natives could not fight them well. The natives also did not understand the concept of owning land, so they did not understand the claiming the land for a country. Now I also understand that our world is shaped by this discovery. I also know I would not exist the way I do had it not been for this history. However I cannot glorify a man who introduced slavery and really developed the slavery techniques of the time. I also have so many issues with how the land was destroyed for wealth and progress. For more information about some of the controversy and the history of the holiday check out the Columbus Day post I wrote last year.